What does it mean to be “minor?”

“Minor” can refer to sports leagues, musical scales, types of injuries and, yes, even mean being trivial. But in the case of the minor prophets in the Old Testament, the term refers to “length.” The 12 minor prophets in the Bible have fewer words than the major prophets: Isaiah, Jeremiah, Ezekiel and Daniel. (Another book, Lamentations, is traditionally accredited to Jeremiah as well.) The words of both groups of prophets are equally important. 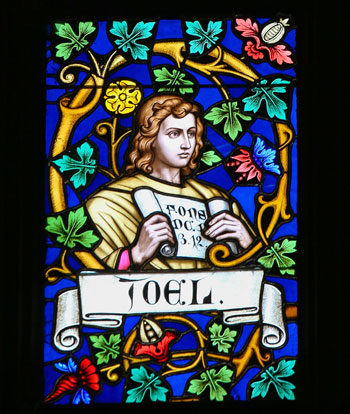 Stained glass windows of the minor prophets Joel and Amos. The windows are in St. Vitus Cathedral in Prague, Czech Republic. (Bigstockphoto.com)

While the Christian Bible has individual books for each minor prophet, the Jewish Bible (sometimes called the Tanakh) places all 12 into one book called Nev’im (the prophets.)

Lent always starts with a reading from a minor prophet, Joel, on Ash Wednesday. “Even now, says the Lord, return to me with your whole heart, with fasting, and weeping, and mourning…” (Jl 2:12). Later this month (Feb. 24), the first reading will come from the prophet Jonah, speaking in Nineveh: “Forty days more and Nineveh shall be destroyed …” (Jon 3:4).

The minor prophets lived over a span of nearly four centuries, from about 790 B.C. to 430 B.C. They witnessed some very important events in salvation history: the fall of the northern Kingdom of Israel (722 B.C.), the Babylonian Exile from Jerusalem (starting in 598 B.C.), the destruction of the First Temple (586 B.C.), the return and rebuilding of the Second Temple (515 B.C.) and into the post-exile time of the fifth century before Christ.

The messages of these 12 prophets were not always, or even mostly, what we think of today as prophecy: foretelling future events. Yes, these prophets spoke of the coming of the Messiah and of God’s Kingdom on earth, but they also instructed people to turn from evil ways, inspired hope in exile and reminded us of the primacy of God in life.

“Prophet” comes from a Hebrew word, navi, which later became the Greek prophetes. Navi (sometimes written nabi) comes from two Hebrew letters which, when put together, mean “being open,” as in waiting to be filled. In Hebrew tradition, prophets were open to receiving God’s word and were sent to proclaim (pour out) that word.

Prophets of biblical times were spokespersons for God. They also spoke for the people to God in prayer. Prophets played such an important role in Hebrew Scriptures that their words and work take up one-third of the Tanakh. The book of the prophets falls in the middle of the Tanakh, after the Book of the Law (the Torah) and before the Ketuvim (the writings) which include the Psalms and Proverbs.

The Na’vim is the longest of the three sections — and includes the major prophets. It demonstrates how all prophets walked with the Hebrew people through most of their history. It also shows that the prophets’ main purpose was to guide the Chosen People, reminding them of the Law and keeping them close to God — both in good times and in times of trouble. As The Catholic Encyclopedia explains, “The Hebrew prophet … had to maintain and develop the knowledge of the Old Law among the Chosen People, leads them back when they strayed, and gradually prepare the way for the new kingdom of God…”

The minor prophets offered various messages, but one point they often made was reference to a coming day of judgment by God. Whether this is a day that happened later in history or is a time yet to come is open to reflection. These prophets also, in different ways, announce the coming Messiah.

The minor prophets are: