How a screen may have become the communion rail

Have you ever heard of Holy Rood Church? 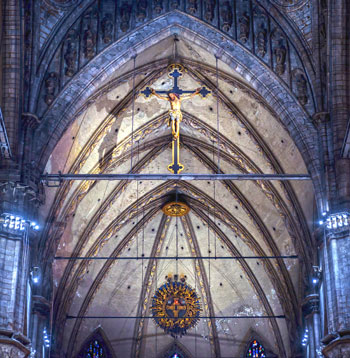 Crucifix over the altar at the Milan Cathedral. (Bigstockphoto.com)

We don’t technically have one in our diocese. However, we could because we have at least three churches named: “Holy Cross”

“Rood” is an Old English word that means “rod.” It most likely comes from an Anglo-Saxon word for “stake” or “cross,” rouda. When used as in a church reference, “rood” refers to the crucifix, with the body of Christ upon it.

During Lent, it is natural to turn our eyes to the cross of Christ. Whenever we enter any Catholic church, whatever its name, our eyes go to the crucifix, hanging in the sanctuary.

According to Catholic Church rules, the sanctuary is always set aside from the rest of the body of the church in some fashion. The General Instruction of the Roman Missal notes:

“The sanctuary is the place where the altar stands, the Word of God is proclaimed and the priest, the deacon and the other ministers exercise their functions. It should be appropriately marked off from the body of the church, either by its being somewhat elevated or by a particular structure and ornamentation” (n. 295).

This setting aside of the sanctuary is an ancient practice. Many may remember the communion rail, which can still be seen in some churches. This rail, sometimes called an altar rail, served a dual purpose, It is a place to receive holy Communion, but also to separate the congregation in the body of the church (the nave) from the altar and its environs.

In some churches, especially those linked with a religious order, the sanctuary was also separated by an area for the choir, called the “chancel.” Here, the choir, often members of the religious community itself, would have their designated stalls and their chanting would often go from one side to the other, in an echoing pattern that helped make chant and plainsong a hallmark of such churches.

Before there was a communion rail, this special area of the church — the chancel and the sanctuary with the altar — was demarcated by a screen or a wall with openings sometimes called “squints.” This tradition of a screen began in medieval times and continued into the Renaissance period, roughly the fifth to the 16th centuries.

The cross on top

On top of this screen stood the crucifix, front and center, usually flanked by images of the Blessed Virgin and St. John. On the lower part of the screen, there were often images of various saints. However, it might only have had elaborate carving in the wood of the lower screen, perhaps with religious symbolism. Because of the prominence of the crucifix, or rood, the screen became known as “the rood screen.”

The use of the rood screen ended abruptly in England with the Protestant Reformation and the destruction of many Catholic churches. This also happened in Europe, but took place there more gradually. After the Council of Trent in the 16th century, rood screens in Catholic churches began to disappear, although the council did not specifically ask for their removal.

The Protestant influence of having less ornamentation than Catholic churches eventually affected church design in general and rood screens elsewhere also disappeared. Some speculate that rood screens were replaced, as a way to mark off the sanctuary, by the communion rail. For example, the National Churches Trust in London (nationalchurchestrust.org) claims there is a connection. However, while the communion rail — sometimes called the altar rail — appeared around the same time that the rood screen disappeared, the connection is not that clearly linked among church historians.

The communion rail, however, did work along with more frequent reception of the Blessed Sacrament. Receiving the sacrament had decreased during the Middle Ages, and its reception was encouraged by the Council of Trent and saw a steady increase after that.