After learning that co-worker biked to work, Haley Bridges gives her a car won in raffle

APPLETON — Raised in a family where faith is important, Haley Bridges has always followed the Golden Rule.

“I’ve grown up with being told to be nice to others, so it’s like second nature to help anyone in general,” said Bridges, a junior at St. Francis Xavier High School. Last month, friends and strangers witnessed how Bridges put into practice that teaching found in Matthew 7:12. 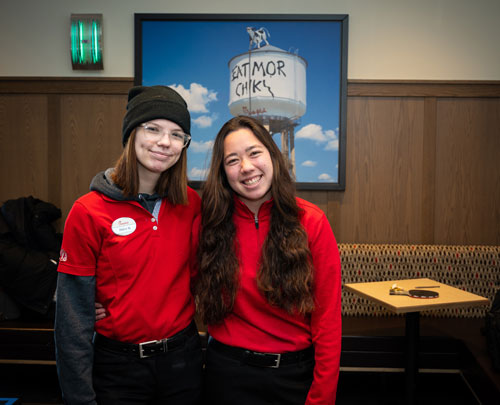 Haley Bridges, left, and Hokule’a Taniguchi, who had moved to Neenah from Hawaii to live with her sister, met each other while working at Chick-fil-A in Appleton. Hoku, as friends call her, rode a bike to work until Bridges, who won a car at her work’s Christmas party in January, gave her the car. (Sam Lucero | The Compass)

Bridges began a part-time job at Chick-fil-A in Appleton last August. Two months later, Hokule’a Taniguchi, who had moved to Neenah from Hawaii to live with her sister, began working at the fast-food restaurant.

“When she first talked to me, she started off with a very cheesy pickup line,” said Bridges. “She’s just very goofy like me, so we both got along very well together.”

Bridges soon learned that Hoku, as friends call Taniguchi, rode a bike to and from work, which was about a five-mile round trip.

“One day, she asked me to take her home after work,” said Bridges. “That’s when I found out about her whole living situation. I was kind of shocked because, obviously, Wisconsin weather is kind of bad. I would always help her if she needed rides and make sure she would get there safely.”

On Jan. 10, the Appleton Chick-fil-A held an employee Christmas party at the Grand Meridian banquet hall. The event included raffle prizes for employees. Bridges said she had heard rumors that a car would be given away.

“When we arrived at the Grand Meridian, one of my friends came up to me and said, ‘There’s actually a car there,’” said Bridges. “Maybe 10 of my friends and me, we decided, ‘Hey, if we get the car, we don’t need a car. We will pull our tickets for Hoku.’”

“I didn’t need a second chance to think about it. It’s her car if I win,” Bridges said. “My name got called and we looked at each other and she just started crying. We ran up to each other and hugged each other. Everyone else just ran up to us and hugged us. We were just so happy for Hoku that she could finally have her own car. It was so surreal.”

Chick-fil-A posted the event on its Facebook page the following day and the two young women were interviewed by numerous news outlets.

“Even after all this news coverage, me and Hoku have been very humble about it,” said Bridges. “There’s really no need to brag. It’s very cool, but we are still living our normal lives.”

She said her Catholic faith has taught her about sacrifice and charity.

“I go to a Catholic school, so that’s what I’ve been taught growing up,” she said. “Giving has always been something that I want to do. And I want to help people, so I had the opportunity to give something major to one of my friends that was very life-changing for both of us.”

Although she did not make a fuss about it, Bridges said she shared the incident with her parents, Ann Jennerjahn and Jim Bridges, and grandmother, Pat Sorenson.

“At first, my mom’s reaction was ‘… You gave away a car? What?’ Then later she was proud of me, because she always knew I was like this,” said Bridges. “My grandma was also proud of me. I’ve never seen her this happy before.”

“My theology teacher is the one I’ve been telling the most to,” she said. “So she’s heard it all from the start. She’s just really proud that it all happened.”

“Haley’s act of kindness speaks louder than any words I can impart about our faith,” McKnight told The Compass. “Haley did not think twice about gifting the car to someone who needed it more than her. The fact that, out of all the people there, Haley had the winning ticket shows how God used her selflessness for someone else.”

In sharing the story with her, McKnight said that Bridges “was pretty nonchalant.”

“When she told me about it, it was kind of, ‘Hey, Mrs. McKnight, I want to tell you about my weekend,’” she said. “I was so struck by her story, but not too surprised. She has a good heart.

“I also want to give credit to Chick-fil-A for providing an atmosphere that nurtures a supportive and giving environment,” added McKnight. “Haley really enjoys going to work and feels welcome and accepted. That helps encourage happy, generous employees.”

The theology teacher added that Bridges’ faith formation and her job at Chick-fil-A “came together as a witness (to the belief) that ‘to give is better than to receive.’ As her theology teacher, it is a blessing to witness.”

As it turned out, her kindness was paid forward. After donating the car to Hoku, Bridges’ aunt, Debbie Fabel, held a Facebook fundraiser to help Bridges pay off her own car. She had been paying $50 a month on her $4,000 car and the online fundraiser raised enough to cover her remaining payments.

With the season of Lent underway, Bridges has already gotten an early start on the practice of almsgiving. Now she’s working on something else.

“I’m trying to give up sarcasm for Lent,” she said. “I’m just a very sarcastic person.”

Words to live by: “Do not pray for an easy life, pray for the strength to endure a difficult one.” — Bruce Lee