APPLETON — St. Therese Parish broke ground Oct. 25, 2020, on a major construction project last fall, and when completed, the project will allow the church campus and its buildings to better serve the mission of the parish for the next century, according to Fr. Ryan Starks, pastor.

The project is expected to be complete late summer 2021.

In an email to The Compass, Fr. Starks explained that the project “started with an obstacle and opened up into an opportunity.” 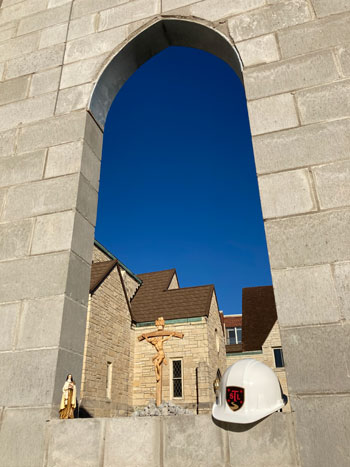 An arched window in the newly-constructed narthex of St. Therese Church in Appleton frames part of the church, left, and convent building. On the window sill is a small statue of St. Thérèse of Lisieux, a crucifix and a hard hat with the parish logo on it. Renovation is expected to be completed by the end of summer. (Fr. Ryan Starks | Special To The Compass)

“The obstacle was the school building,” he said. “This was the first building constructed on the campus, starting in 1927.” Over the years, he said the school “blessed the parish and community with the education of tens of thousands of children, not to mention other uses over the decades.”

In its heyday, the school enrolled around 1,000 students annually. “But since 1983, when the school closed its doors, it has been increasingly difficult and costly to maintain a building that now is only utilized at 5% capacity,” said Fr. Starks. “Over the years, creative ideas have been attempted — exploration to repurpose or lease or even sell. None of the options ever reached the level of being administratively or fiscally responsible for the parish.”

A few years ago, St. Therese formed a special committee to explore the school building’s future.

The question the committee considered, said Fr. Starks, was: “How do we address not only the school building, but also the rest of the campus, to best serve the parish into the next 100 years?”

“Deacon Tony Abts did a wonderful job leading the committee of a dozen or so parish leaders,” he said. “They engaged the parish by communication with groups and a parish-wide survey to try to detect needs.”

A report by the committee offered the following suggested needs:

— A new narthex to serve as a much-needed social gathering area before and after Mass, including bathrooms and handicap accessibility into church;

— demolition of the school building.

“This big undertaking has a price tag and, fortunately, when the parish began this process, they entrusted it to the care of their patroness, St. Therese of Lisieux,” added Fr. Starks. “After all, she promised she would spend her time in heaven ‘doing good on earth.’”

According to Fr. Starks, one week after the two-year study was completed, a call came in from an executor of someone’s will. A gift covering two-thirds of the cost of the project was willed to the parish.

An important part of this gift is the backstory behind the generous donation, he continued.

A few months before the gift was made, Fr. Starks was at home recovering from surgery. “All of a sudden, something came on my heart to call” a member of the parish, he said. “He was resting and someone said I could leave a message. So I did.”

Three hours later, the person he spoke to called him back. “‘Father, the truth is, he is not doing well. He didn’t want anyone to know he was sick, but since you called earlier, we took it as a sign,’” Fr. Starks recalled.

The family said they knew how much the man’s Catholic faith meant to him, “‘so we are wondering if you could come over to pray for him?’” Fr. Starks said he was told. “I arrived and we went up to his room, knelt by his bedside, anointed him, told him we were praying for him and loved him,” he said. “I told him he was in good care with the angels and saints and with Jesus. Then we turned off the lamp and left his room.”

A few hours later, he died.

Fr. Starks said he did not know that the man was sick, nor did he know him well, “other than remembering him sitting in the same spot every weekend for Mass,” he said.

“As it turns out, a couple months later, that call from the executor of wills was regarding that same gentleman. Nobody knew he had that money, except his financial advisor and God,” said Fr. Starks. He said he believes his decision to call the man, out of the blue, was divinely inspired. “(God) wanted this humble man to receive the sacrament of anointing before death, as a way of God saying to him, ‘Well done, good and faithful servant,’” he said.

The parishioner’s donation allowed the parish to move forward with its remodeling plans, said Fr. Starks.

“Since that time, the parishioners and others have raised an additional $750,000, meaning we are in the final stretch of fundraising, with about $750,000 to go,” he said. “Our motto has been: ‘Together, let us make something beautiful for God,’ and so our community has come together in many beautiful ways.”

One of those beautiful ways has been a group of volunteers formed to help with the project.

A men’s group, Los Trabajadores de San Jose, (St. Joseph Worker Crew) has dedicated over 500 volunteer hours toward some of the renovation of the three-story convent building, said Fr. Starks. “In the spirit of St. Joseph, they, too, are caring for the home of Jesus and Mary with their carpentry skills and hard work.”

The parish’s patroness, St. Therese, was a patroness of missionaries, he said, “and so I find it fitting that this parish has become a parish of so many cultures from around the world: German roots and others of European descent, a large Mexican and Latin American community, a hundred or so Micronesians.”

As word of the parish construction project spread, friends of the parish have come forward to offer assistance as well, according to Fr. Starks.

“Recently, we were given a matching gift opportunity of $100,000 from Mary Beth Nienhaus,” he said. “Mary Beth’s parents were married at St. Therese, and so when she heard about the project, she reached out. Though she is not a parishioner, her ties to the parish continued after childhood.”

Anyone interested in helping make the matching gift a success can call the parish at (920) 733-8568 or visit st-therese.com.

“Our mission at St. Therese is not simply to finish these buildings, but to live the mission inside of them,” added Fr. Starks, “to care for the physically and spiritually poor, and in response to our patroness, spending our time on earth, doing good for heaven.”