APPLETON — Joe Mauthe can pinpoint the moment when God led him on a different career path. It happened when he attended a talk by Bishop David Ricken during Lent of 2012 at the Norbertine Center for Spirituality at St. Norbert Abbey in De Pere.

“The upshot of his message was ‘If you are going to call yourself a Christian, you need to be serious about it. You need to spend time on it and you need to invest in that.’ Not that I hadn’t heard that message before, but, for whatever reason, that was the trigger for me,” said Mauthe. “So, OK, now when I wake up, instead of my first thing being to get up and go to work, it was get up, spend some quiet time in reading, prayer and reflection. As I did that over the next 18 months, I started to change; what was important to me, what I was thinking about, what I wanted to do.” 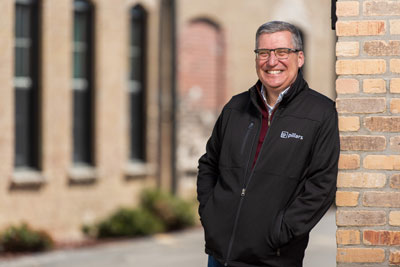 Joe Mauthe is executive director of Pillars Inc. in Appleton. The organization formed through the 2018 merger of the Housing Partnership of the Fox Cities, Homeless Connections and the Fox Valley Warming Shelter, all in Appleton. (Scott Eastman | For The Compass)

Mauthe, who worked 25 years for Kimberly-Clark and seven years for Plexus, made the move to the nonprofit world. In 2013, he became executive director of the Housing Partnership of the Fox Cities. Three years ago, the organization merged with Homeless Connections and the Fox Valley Warming Shelter to form Pillars Inc., located in Appleton.

“I’ve liked every part of this seven-plus years in this world more oriented to service and more aware of the fundamental needs of the people of this community,” said Mauthe, who serves as executive director at Pillars. “It has been most rewarding and most gratifying for me. Having said that, I don’t know if I would have wanted to make the change any earlier. It was the right time for me. It’s struck me numerous times. God doesn’t waste anything. Any experiences I had personally and professionally leading up to that really have come to play in this job. The things I’ve done in different jobs, different settings; it’s amazing how much that has come to be fruitful in this job.”

Pillars provides shelter, support and solutions for the housing needs in the community. Mauthe’s role is to oversee all aspects of the organization, which has approximately 60 employees.

“The mission of our organization all deals with the value of a home,” he said. “Everything we do is about understanding how difficult it is when someone doesn’t have a home in place and how much possibility there is when we can put that home in place for an individual or family. Chronically homeless or first-time homeless, it’s all about, ‘Can you move ahead, can you become the person you are meant to be without that foundation of safe, stable, affordable housing?’ We do it in a variety of ways.”

Pillars connects with people on the streets, provides support to those in shelters, and offers resources and services to help individuals before they ever become homeless.

“I get the honor of telling our story to the community,” said Mauthe. “This is a community that has a big heart and wants to support people when they are at their lowest point. I get the privilege of making that connection with people and saying, ‘Here is the need that exists. If you can provide support, here’s how we can work together to make somebody’s life better.’”

Pillars works with more than 400 people a year through its housing program and serves approximately 130 individuals a day at its two shelters. Mauthe said the rewards of his work are many, but there are also difficult days.

“People are getting jobs, their own homes, reuniting with families that have been broken for one reason or another,” he said. “They are fully achieving their potential to become who they are meant to be.”

Mauthe was born and raised in Appleton. He has lived in the community most of his life, with the exception of four years due to job relocations. He met his wife, Jean, while a student at St. Norbert College in De Pere. They are parents to three grown sons and have three grandchildren.

Mauthe, who earned a Master’s of Business Administration from Marquette University in Milwaukee, is a member of St. Bernadette Parish in Appleton. His parents, Jim and Millie Mauthe, were founding members of the parish. He has been active at the parish teaching religious education at the high school level and leading small groups during Lent. He and Jean led the children’s Liturgy of the Word in the past. Mauthe is also part of a men’s group.

“Every Wednesday morning, even throughout COVID, 25 to 30 men get together to talk about how things are going, and for some prayer and reflection,” he said. “That has been terrific.”

The pandemic has limited visits by Mauthe to the Pillars’ sites. He looks forward to his return.

“That is the most gratifying part of the job,” he said. “It doesn’t always come easy. That’s not the most natural part of my skill set, but to be able to sit and talk with people about what they are going through is always eye-opening and oftentimes inspiring.”
Reflecting on his journey, Mauthe said that prayer led him on his path and continues to guide him.

“Every day, I’m asking for help,” he said. “It’s made my relationship with Jesus a lot closer because I’m in situations a lot more where I need to ask for help. I need wisdom to do the best work I can. There is no question that this work is the work that Jesus professed and it is serving God’s children.”