Fr. Van De Kreeke, a Sheboygan native, decided that he wanted to be a priest in fourth grade. He attended high school and junior college at Salvatorian Seminary in St. Nazianz. Following two years at St. Francis Seminary near Milwaukee, he studied four years at the American College, University of Louvain in Belgium. Fr. Van De Kreeke was ordained to the priesthood in Belgium by Archbishop John Cody of New Orleans on June 29, 1963. 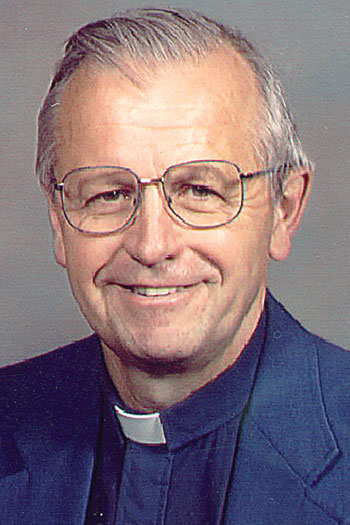 His first appointments were as associate pastor at Corpus Christi Parish, Sturgeon Bay, and then Sacred Heart Parish, Oshkosh. In 1967, he was appointed associate pastor of St. Matthew Parish, Green Bay, and secretary and notary of the Marriage Tribunal of the Diocese of Green Bay. His position in the tribunal led him to study canon law at The Catholic University of America in Washington, D.C. He was appointed chief judge of the Marriage Tribunal in 1972.

“I taught high school Latin for 20 years, and that stood out as very special,” he said in an interview for his 50-year jubilee with The Compass in 2013. “I got very interested in Latin, and I enjoyed teaching it and relating with the kids who took the class.”

During his time studying in Europe, Fr. Van De Kreeke developed a passion for travel. He visited approximately 40 countries, including multiple trips to China and Thailand. His pastimes included racquetball in his younger days, reading and watching baseball.

“Being pastor of a parish was a tremendous thing, the people that you meet and who do much for you,” Fr. Van De Kreeke told The Compass.

The visitation for Fr. Van De Kreeke will be from 2 to 4 p.m. on Sunday, March 21, and 9 to 11 a.m. on Monday, March 22, at the Sacred Heart site of St. Jude the Apostle Parish, 519 Knapp St., Oshkosh. The funeral Mass will be celebrated at 11 a.m. on March 22. Bishop David Ricken will preside. Masks and social distancing are required. Burial will follow in Allouez Catholic Cemetery.