The Pietà image comes in many forms over many years

As we enter the solemn days of Holy Week, our thoughts turn to Christ’s Passion. They also turn to Mary, standing at the cross (Jn 19:25).

Depictions of Mary at the cross have been frequent devotional artwork. Perhaps none is more famous than the Pietà of Michelangelo, now in a chapel at St. Peter’s Basilica in Rome. 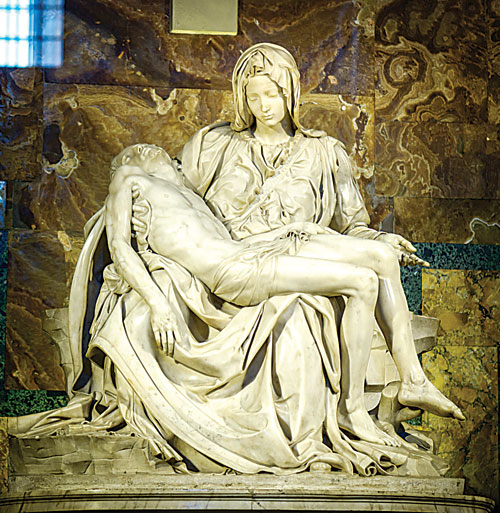 The Pietà by Michelangelo stands in a chapel within St. Peter’s Basilica in Rome. Bigstockphoto.com

This 5-foot, 9-inch statue was carved from a single piece of Carrera marble. It shows Mary holding the dead body of her son draped over her lap.

This event in the Passion and death of Jesus has been part of church art since early times, even back to the Byzantine Church of the ninth century in the East. Various images, often called the “Deposition from the Cross” or the “Lamentation,” show Jesus’ body being accepted by Mary, sometimes laid at her feet, sometimes grasped in her arms. There was often a starkness to the images, with Jesus’s body stiff, even formal in pose.

Interest in the Passion

This began to change in the late Gothic period (14th to 16th centuries), especially in German church art. More emotion entered the scene — not just the sorrow of Mary, but her intense grief, as well as the frailty of Jesus’ body. This coincided with a greater devotional interest in the Passion. It was also a time of plague across Europe, and people identified with images of a grieving mother and dead son.

There was also spreading popularity of the Stations of the Cross, as well as the emphasis placed on Christ’s humanity by saints like Francis of Assisi and Bonaventure. (Francis was the first to offer a live Nativity.)

Images of the 13th Station — Jesus taken down from the Cross — became common, often called vesperbild. This name came from the 13th-century German church’s tradition of marking the evening hour when Jesus was taken from the cross. Vesperbild means “evening image” in German and focused on this poignant moment between the mother and her dead son. A striking image is the anonymous “Röttgen Pietà” of 1300 (bit.ly/2OB4GQq). It shows Mary’s agonized face, filled with shock and even anger, as she struggles to support her son’s emaciated body.

By the 14th century, this vesperbild image reached Italy and became known as Pietà, a Latin word meaning “pity” or “compassion.” Paintings, by masters like Giotto and Titan, as well as sculptures by Donatello and Michelangelo, explored the theme of the sorrowing mother.

Michelangelo was a young man and virtually unknown when an old man asked him to sculpt a funerary monument. Michelangelo, a native of Florence, was 24 when he was commissioned by a French cardinal, Jean Bilheres de Lagraulas, to sculpt a monument for the cardinal’s tomb. The work began in 1498 and was not quite complete when the cardinal died in August of 1499. When complete, the Pietà was placed in the Chapel of Santa Petronilla, a funerary chapel attached to Old St. Peter’s Basilica.

This Santa Petronilla chapel was removed when Old St. Peter’s was taken down in 1505 and rebuilt. When it was placed in the new basilica, the Pietà quickly became a draw. However, its artist was unknown to viewers.

The story is that Michelangelo visited and heard his cherished work attributed to a Milanese artist, Il Gobbo. This so upset the young man that he hid in the church overnight to carve his signature on Mary’s sash. He later regretted it and the Pietà remains his only signed work of art: “Michelangelo Buonarroti the Florentine did this.”

While this statue is not the only Pietà, Michelangelo used artistic tricks to make his statue unique:

Another thing to note is that this Pietà was not the only one by Michelangelo. There are three others known to be his work.