GREEN BAY — Lori Keisic credits a cartwheel mishap at age 12 for shaping her career path. She didn’t warm up properly and severely pulled her hamstring.

“Right from the bone,” she said. “My doctor referred me to physical therapy and I thought, ‘This is cool.’ This is so interesting, the modalities they use for the exercises I had to do. That kind of stuck with me.” 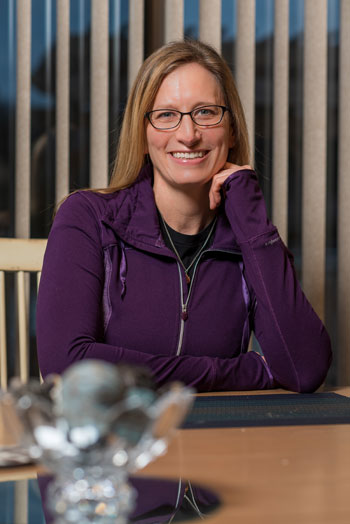 Lori Keisic moved to Green Bay from the Detroit area in 2002 for a physical therapist position with Aurora BayCare Sports Medicine. She returned to the Catholic Church in 2013 and is active at St. Bernard Parish, Green Bay. (Scott Eastman | For The Compass)

In July, Keisic, who earned a master’s degree in physical therapy from Wayne State University in Detroit, will mark 19 years as a physical therapist with Aurora BayCare Sports Medicine in Green Bay. Her subspecialties are dance/performing arts and golf. For Keisic, the work not only involves the physical healing of her patients, but also displaying compassion for their emotional health during a difficult time in their lives.

“There is definitely a mental component, the psychological and psychosocial elements,” she said. “If I’m working with a young lady who is a dancer and she wants to compete, but she has an injury, the emotional pain is there. She is thinking, ‘I’ve been with this team for five or six years now. I can’t compete and I’m not even hanging out with (my teammates) during this.’ As a teenager, that’s so important to have that belonging.”

The reward for Keisic is to help her patients return to the stage or playing field. Her support doesn’t stop when they complete their final therapy session.

“It’s not unusual to see me at a performance,” she said. “I tell them, ‘Send me your schedule. I will see if I can stop over to watch you compete or cheer you on at the game.’ I really enjoy doing that. You work closely with them and get to know them; especially for someone with an ACL (anterior cruciate ligament) reconstruction. You are with them for six to nine months.”

Keisic has a background in the performing arts and athletics. She grew up in Sterling Heights, Mich., just north of Detroit, the oldest of three children in her family. She became a competitive baton twirler at age 8. Keisic was once a featured twirler for the Detroit Lions and competed on a twirling team based in Chicago. She is now a certified judge for local, regional and national baton competitions. She also played soccer through high school.

Keisic, who grew up in a Catholic family, moved to Green Bay from Michigan in 2002. She said that she did not have a faith element in her life for about a decade, including her early years in Wisconsin. A friend encouraged her to become part of an evangelical church in the area.

“I loved it there,” she said. “I was really involved for five years. “Some of the youth group kids started asking questions about different religions. Having been raised Catholic, I still had that all in my head. I still made the sign of the cross when I was (at the evangelical church). I felt that was part of me.”

“I was in a life transition. I was going to both,” she said. “I came back to the Catholic Church. I’m very passionate about learning, teaching and growing. I’ve been with St. Bernard since 2013. I’ve become involved as an usher, lector, discipleship team and parish council. I’m made my Cursillo (a three-day apostolic movement).”

At Life in the Spirit (a seminar designed to help people deepen their faith), Keisic was in conversation about yoga. She enjoyed the flexibility and movement patterns of yoga, but its base in Hinduism led her to do research. Ann Kieltyka, manager of Cathedral Book and Gift in Green Bay, informed her of DVDs in the store for an alternative to yoga.

“In 2016 or 2017, I bought the Pietra Fitness DVDs and started using them,” said Keisic. “I thought, ‘This is kind of cool.’ In 2018, I decided to be part of the class for Pietra instructor training. It’s a nine-month process and then tests and practicals. I became certified in November of 2019.”

“The whole class is a prayer. We open with the sign of the cross and prayer intentions,” she said. “Each class has a theme. There is Scripture. Throughout the class, there are warmups and physical components. We get a long hold (position) when we read our meditation. You are in that big long stretch after you did this big workout. You are just relaxing, absorbing the meditation. One of my favorite meditations is on tranquility. It talks about how the lake needs to be calm in order to reflect the sun and our soul should be that way so we are able to reflect God.”

Keisic teaches six to eight classes a week. She is certified for three different intensity levels and is the only Pietra instructor in northeast Wisconsin. While she looks forward to teaching in person following the pandemic, Keisic plans to continue virtual classes as well. She has been able to connect with students around the world, including an instructor from Australia who joined her class.

“I would love to be able to teach at the high school level, teach at retreats and retreat centers, local parishes,” she said. “My big vision for Rock Wellness is to host my own ‘Mind, Body and Soul Retreat.’”

The “Rock” in her business name is special to Keisic for numerous reasons. It is a tribute to her late father, Dennis Keisic. She recalls great talks with him while picking up rocks from their backyard pool during her youth. She has a Detroit Lions rock on display in her home, which was a gift from her mother, Christine.

“‘Pietra’ means ‘rock’ in Italian,” she said. “R.O.C.K. also stands for Rely on Christ the King. I love acronyms.”

“You are hearing the Word, you are physically practicing and you are seeing and feeling,” said Keisic. “It’s a whole body experience. Then we end with closing prayer and the sign of the cross.”