GREEN BAY — The work that Meg Lehman does as evangelization and youth coordinator at St. Bernard Parish touches the lives of all parishioners. But during these challenging times of COVID-19, it’s the youth of the “next generation,” as she calls them — those who will be the leaders in parishes across the Diocese of Green Bay one day — who are of special concern for her. 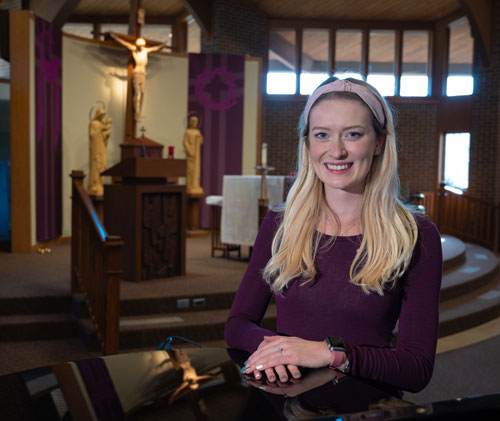 Meg Lehman, evangelization and youth coordinator at St. Bernard Parish in Green Bay, said the parish has been offering socially-distanced in-person programming for youth during the past year. She looks forward to youth mission experiences in the summer. Funding from the Bishop’s Appeal has allowed the youth ministry to flourish, added Lehman. (Sam Lucero | The Compass)

Lehman, 21, began working at St. Bernard Parish in January 2020. In December 2019, she learned about the opening for the new “reimagined” position, as she described it, and decided to pursue the opportunity, even though she wouldn’t graduate from the University of Wisconsin-Green Bay with her degree in mass media and social communications until May 2020.

It has been fortunate for the parish that she did.

Lehman’s education has been a big plus for St. Bernard Parish, but so is the experience she brought from her service to the Catholic Campus Ministry at UW-Green Bay, which is supported by the Bishop’s Appeal.

“I loved being part of that Catholic environment,” she said. She served as the music minister, planning music for Mass at the Mauthe Center, directing the choir and organizing the cantors. “I’ve been involved in music my whole life,” she said, and had originally planned to major in music.

Lehman is also an avid videographer and even has a  wedding videography business. In her wider evangelization role, she has livestreamed Mass for the parish, oversees adult ministry and Bible studies, manages the Discipleship Team and handles the parish’s social media, which has been especially vital during the pandemic.

“‘I don’t know what we would have done without you,’” she said is something she’s been told more than once.

In particular, the youth ministry at St. Bernard Parish has experienced important growth this past year — despite the COVID-19 pandemic.

Funding from the Bishop’s Appeal has allowed the youth ministry to flourish, she said, emphasizing that donations given to the annual appeal really do help change lives.

Lehman described the impact youth ministry has personally had on her life.

Her family moved to Kaukauna when she was 6 years old and she grew up in St. Katharine Drexel Parish there. As a teenager, “I participated in a lot of different youth retreats,” she said, including the Colorado Leadership Retreat. “It just really drove home the importance of having a relationship with Jesus and the importance of witnessing it with other people,” she said.

Being a youth minister means making connections with young people, she said. “When I first started (at St. Bernard Parish), there was really limited stuff happening for youth. … I kind of had the freedom to build that from the ground up,” Lehman said, noting that, through the Holy Spirit, “over the past few months, we’ve really, really been reaping the benefits of that.” 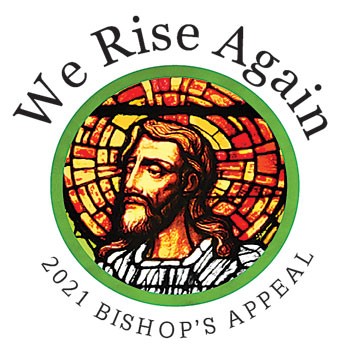 What has worked best in growing the St. Bernard youth ministry, she said, has been offering socially-distanced in-person programming. As a result, young people have experienced “the importance of a relationship with each other, a relationship with Jesus, … growing closer to God and just forming a community of like-minded people.”

With the help of her youth ministry assistant, Kylie Rogers, a senior at St. Norbert College in De Pere, they offer regular “youth drop-in nights” which are well-attended, in particular, by middle school students. The evenings open and close with prayer, and there’s always food and conversation and, perhaps, some games.

During the summer, there were outdoor movie nights featuring Christian themes. “We had a really successful Christmas party,” she added.

At the suggestion of Fr. Mark Vander Steeg, pastor, the youth ministry has started a Respect Life Club for the sixth through eighth grade students at St. Bernard School. “It’s going to be a club that meets twice a month during lunch and recess … just focusing on all human life,” said Lehman.

And on Palm Sunday evening, there will be a program for students in eighth to 12th grades focusing on the topic “How to Be Catholic in a Secular Society.”

Lehman is already looking ahead to summer, when St. Bernard youth will have the opportunity to participate in the local mission experience called Love Begins Here. She’s also planning a youth ministry hike.

“I’m always thinking about these students, how they are the future, the next generation,” said Lehman. “It’s important for people to consider the youth (when they think about the Bishop’s Appeal) because, without that funding, what we do can’t be possible.”