Love of parents so often looks like their children 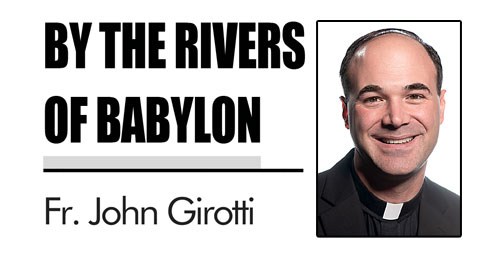 I recently had the experience of hearing the first confessions of second graders. The parish where I visited had the quaint practice of having the parents bring their young children to the priest to introduce them right before the celebration of the sacrament. Perhaps this was meant to calm the nerves of the children — or maybe the parents, too. Or the priest! But it was effective and the children did quite well.

While watching each of the parents walk up and introduce their child to me, I was immediately reminded of one of my favorite paintings. It is titled “Breaking Home Ties” which was painted in 1954 by American painter Norman Rockwell. In this particular painting, considered to be one his finest works, two figures are depicted sitting on the running board of a decrepit pickup truck while waiting for the train. On the left is an older man, a father, who is stooped and tired, weathered and worn. He stares off into the distant past while clutching an old hat and wearing a dirty pair of blue jeans.

Seated next to him is his young son, ready to go off to college. He is dressed in formal attire, with leather shoes, a rather loud tie, and perfectly trimmed hair. He sits upright and is smiling, looking over his father’s head into the bright future. Both figures are silent, looking past each other while a wistful dog looks on.

I saw a bit of this picture reflected in the young children with their parents that night. The moms and dads looked tired and worried after a long day of work on a cold winter evening. Some were rich, others poor, some were seemingly faithful, others perhaps not as much. For some, time had not been kind to them. And yet, one by one, they brought the love of their life and the apple of their eye — their young son or daughter — to God’s house to receive his sacrament of forgiveness. The children were all filled with youthful energy and happy to be alive! Their parents had the weight of the world on them. The difference between them that night was striking.

Love looks like something. It is not merely an abstract concept or an image on a computer screen. It must be in fleshed to take on meaning. Just as the love of God the Father is manifested to us in his Son Jesus, the Word made Flesh, so, too, the love and sacrifice of parents so often looks like their children.

Or as the traditional homily for the sacrament of matrimony reads, “Sacrifice is usually difficult and irksome. Only love can make it easy. And perfect love can make it a joy. We are willing to give in proportion to how we love. And when love is made perfect, the sacrifice is complete.” Those parents who brought their children that evening to make their first confession were living this. Whatever our vocation in life happens to be, may you and I grow old, giving ourselves in love.

Fr. Girotti is vicar for canonical services and associate moderator of the curia for the Diocese of Green Bay.