GREEN BAY — Dan Pichler has worked for Wipfli, a full-service accounting and consulting firm, since 1983. While transactions, financial statements and tax returns are important for business, it’s much more about relationships, he said.

“The key is to be able to communicate to help (business people) understand what’s important and help them make decisions in their life, whether it’s for their business or for themselves personally, so they are comfortable with the decisions they make,” said Pichler, a member of St. Agnes Parish, Green Bay. “They feel confident that they have the information. It takes one stress away from their lives.” 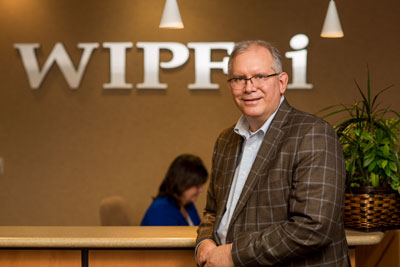 Dan Pichler will retire at the end of May after 38 years at Wipfli, a full-service accounting and consulting firm in Green Bay. Confidentiality, ethical practices and morality are at the forefront of business relationships, he said. (Scott Eastman | For The Compass)

Pichler is the partner in charge of the northeast Wisconsin region for Wipfli, which dates back to 1910 in Green Bay. He serves as the geographic market leader and oversees the Green Bay and Fox Cities offices. The firm works with businesses ranging from small startups to international corporations.

“Our sweet spot is probably more middle market companies,” said Pichler, a graduate of St. Norbert College in De Pere. “We provide audit and review services of financial statements, which are used by investors and banks. We certify that the information is correct. To help new companies, we actually prepare their accounting records.”

Faith plays a role in the workplace for Pichler in a few different ways. Confidentiality, ethical practices and morality are first and foremost, he said.

“There’s black and white and lots of shades of gray,” said Pichler. “We don’t work with people who don’t want to do what’s right. We don’t work with people who want to play in the black. There are some people that do. We’ve terminated relationships with clients that wanted to do something where we’ve said, ‘No, that’s wrong.’ There are too many good people in the world to do business with someone you don’t trust and is not going to do what is ethically correct.”

Some relationships grow beyond business conversations. Pichler maintains some connections that started during his first year with the company.

Pichler’s faith also guides him as a leader in the workplace and in the messaging he brings to the community as a representative of Wipfli. He served as the committee chair on an initiative to develop a culture that is called the “Wipfli Way.”

“It’s built on service, service excellence, service leadership, which draws from the teachings of Jesus,” said Pichler, who is originally from Eau Claire. “Our service program is designed around helping others succeed. We call it ‘Create a Lifetime Relationship.’ How do you treat people if you want to have a lifetime relationship with someone? It creates a kind of language. You may not be using the term ‘Catholic,’ but you are using the teaching of Jesus, how he treated people.”

Pichler and his wife, Peg, met in college. They were married in 1985 at St. Patrick Church in Askeaton by the late Norbertine Fr. Conrad Kratz. They have three children, Ryan, Molly and Michael, and are grandparents to Claire.

“I’ve been at Wipfli coming up on 38 years, been married for 36 years, lived in the same house for 25 years, so, as I tell people, ‘I have a commitment issue,’” said Pichler with a smile.

He describes Peg as a “saint” for her service to the church and school over the years. Their children attended Holy Family School and Notre Dame Academy, both in Green Bay.

Pichler has pulled back from some ministry opportunities. He was diagnosed with Parkinson’s disease 10 years ago.

“There are things I can’t do, to usher or go up and lector,” he said. “My progression has been very slow, so I’m extremely lucky and very grateful. I’m blessed compared to what other people deal with.”

Pichler is a member of the Northeast Chapter of Legatus, an organization for Catholic business leaders. They meet once a month in Green Bay or Appleton.

“It’s not a large group of people, but we get speakers on different topics,” he explained. “We’ve had speakers who have been to Medjugorje and had miracles. We had an exorcist talk at a meeting. You get very uplifting stories. Matt Birk of the Vikings spoke, so we had the sports angle.”

He also belongs to the Equestrian Order of the Holy Sepulchre of Jerusalem, which supports Christians in the Holy Land through contributions and prayer. Pichler hopes to make a pilgrimage to the Holy Land.

Pichler downplays his service compared to his siblings whom he said “inspire” him. His parents were also very involved in the church and the community, he added.

The family moved around over the years from Eau Claire to Milwaukee, Stevens Point and Marshfield. He was the first from his family to move to the Green Bay area. His sister, Terri Klingbeil, the eldest of the four, and younger brother, Tony, made their way to northeast Wisconsin. Their parents, Margaret, now deceased, and Dennis, eventually moved to the area. Youngest sibling, Kathy Weiler, lives in Wisconsin Rapids.

May 31 will be Pichler’s last day at Wipfli. Reflecting on his career and retirement, he’s thankful that he remained true to himself and his faith.

“When you are a leader, part of being a leader is honesty,” he said. “It’s being transparent. To be someone who you are not, people aren’t going to follow. What’s worked for me all these years is to be the person who I am. My faith has always been a part of that brought down from my parents.”