SHAWANO — Soon, you’ll be able to attend Saturday night or Sunday morning Mass at Sacred Heart Church here, amble a short block to Stubborn Brothers Brewery, sip a snifter of Trappist-style beer just like the monks make and, at the same time, be supporting Catholic education at Sacred Heart School.

Located at 220 S. Main St., Stubborn Brothers Brewery will donate a portion of the profits from every glass of monastic brew to the brewery’s neighbor. Sacred Heart Church is just up the block at 302 S. Main St. The monastic brew will be ready around Easter. 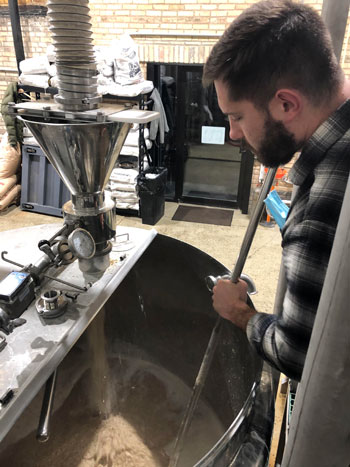 The fundraiser, a collaborative concoction from the over-achieving minds of Sacred Heart pastor Fr. Scott Valentyn and brewmaster Aaron Gilling, came about after Gilling gave a tour of the then newly-opened craft brew pub to Fr. Valentyn and a priest friend last spring.

Stubborn Brothers Brewery opened in 2020, just as the COVID-19 pandemic began to shut down businesses. Gilling, co-founder of the craft beer venture with his brother, Erik, admitted that their launch could have been timed better. But now the business is thriving in Shawano, a resort-area town of 9,300, some 30 miles northwest of Green Bay.

Gilling had brewed beers, but never a Trappist-style or abbey-like brew.

“It’s a unique beer; the yeast is hard to control,” he explained. “I’d visited Belgium, but I never got to talk with the monks.”

“They’re not too chatty,” Fr. Valentyn interjected with a smile.

Having delved into the subject, though, Gilling now can recite chapter and verse about monastic brews.

“There are only 13 breweries in the world that can say they brew truly authentic Trappist beer,” he said, “because you have to have monks doing the brewing in a monastery. Of course, there are commercial brewers making similar beers, but they’re usually called abbey-like.”

Through a network of craft beer brewers, Gilling found a recipe for an “enkel” or “single” Trappist-like beer.

“Singles are the beer that the monks drank themselves with their meals,” he said. “It’s light, easy drinking like a pilsner with an alcohol content of about 5%. Then there are the dubbels, tripels and quadrupels, and the alcohol percentage goes up with each — about 7, then 9, and with the quads you get your 11%.”

The idea to donate a percentage of the profits from making a monastic beer, though, didn’t come about from a lot of research or thought.

“It just seemed the right thing to do,” Gilling said. His 4-year-old son is in the 4K program at Sacred Heart School. “The way I look at it, you don’t need a reason to do the right thing,” he said.

While Fr. Valentyn typically travels the eight and a half miles between ministering at Sacred Heart and St. Martin of Tours in Cecil, where he serves as priest moderator/priest celebrant, he saw the twin potential that the fundraiser could benefit both his parish school and a business in the local community.

And there is, of course, the “religious” connection, with beer historically being brewed in monasteries.

A painting of brothers Aaron and Erik Gilling, co-founders of Stubborn Brothers Brewery in Shawano, decorates a wall at the craft beer venture. The brewery’s new monastic beer isn’t available to the public until around Easter. (Bob Zyskowski | For The Compass)

“There can be something spiritual about the brewing process,” Fr. Valentyn said. “There’s the monastic tradition of ‘ora et labora’ — prayer and work — and dating way back, the monks produced beer mostly for their own use, but then to sustain their ministries. And obviously drinking in moderation and enjoying one another’s company is a good thing.”

Physical elements of the brewing process were indeed laborious, the pastor found. “Fr. Scott said he had an interest in beer and brewing, so we put him to work,” Gilling said.

“I came in on a Monday (his day off),” the priest said, “and I was involved with the grains. They had me stirring the mash, then shoveling out the spent grains. It was more labor intensive than I imagined it would be. My shoulders hurt afterward.”

With its commitment to support the nearby community, Stubborn Brothers Brewery uses locally-grown Wisconsin products as much as possible. Hops come from Marshfield and syrup from nearby Bonduel, Gilling said. Malt for the monastic brew, however, came from Belgium.

“Trappist- or abbey-style beers have a very simple, yet very exact recipe,” Gilling explained. “Being stylistically accurate is very important.”

He described it as “a light beer with spicy notes and a malt background, easy to drink, with light hops, not thick or heavy.”

Carbonation needs to be added yet. “It should be ready right about Easter,” he said, adding that people can call the brewery at (715) 201-0859 to know for sure.

Stubborn Brothers Brewery occupies the one-time Crescent Theater, now a renovated space with classic woodwork, a long bar, safely spaced tables, plus booths along a wall of windows that show off the gleaming stainless steel brewing vats, where Gilling concocts the 21 brews currently on the pub’s menu.

“Once the single is gone, the plan is to brew a monastic dubbel, then tripel, then a quad,” he said. Donating a portion of the profits will continue, he added.

“It’s a fun and unique way to support the school,” said Gilling.