Tradition names the Roman spear carrier at the cross as Longinus

What happened to the lance that pierced Jesus’ side as his dead body hung on the cross?

We have all heard the Gospel stories of the Passion and how “one soldier thrust his lance into his side” (Jn. 19:34). No more is said about this soldier in the Gospels, though, over the centuries, some have equated him with the centurion who stood at the cross in Mark’s Gospel, and proclaimed, “Truly this man was the Son of God!” (Mk 15:39).

Two men or not? For example, the crucifixion mural behind the altar at St. Francis Xavier Cathedral in Green Bay shows two Romans at the cross — one with the lance and another on a white horse with his hand out and mouth open, as if speaking. 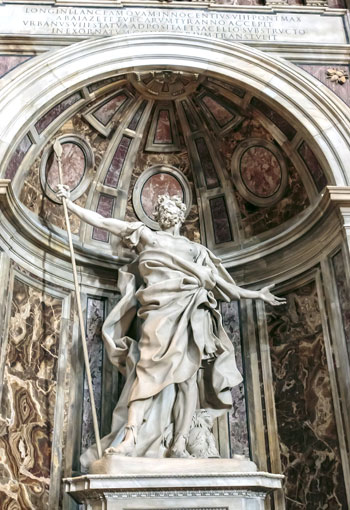 Statue of St. Longinus is one standing on the four giant piers that support the dome at St. Peter’s Basilica in Rome. Bigstockphoto.com

No one knows if these men were one and the same, or two individuals. Nor do we truly know who either one was. Tradition, by the seventh century, holds that the man with the lance was named “Longinus,” now referred to as a saint and martyr. His feast is celebrated in Catholic and Orthodox churches in both the East and the West on Oct. 16. Until the changes in the Latin church’s calendar in 1969, Longinus’ feast was marked on March 15. His relics are claimed by the Cathedral of St. Peter in Mantua, Italy.

His name and other legends

While Longinus may have been his name, there are scholars who believe that name derives from his weapon, since the Greek word for lance is “lónchi.”

Many legends developed about Longinus — that he was blind prior to the crucifixion and regained his sight when Christ’s blood poured out on him from the lance; that he was condemned to never be able to die for what he did to Christ’s body; and that he was martyred at the order of Pontius Pilate. Because of his actions at the cross, Longinus has become known as a saint connected to devotion to the Sacred Heart of Jesus.

There are, likewise, many legends about what happened to Longinus’ lance. As one of the arma Christi (“weapons of Christ,” which are the instruments of Christ’s sufferings), along with items such as the Crown of Thorns, the lance is considered an important relic of the Passion.

The Holy Lance is now said to reside at St. Peter’s Basilica in Rome. It is kept in one of the four huge piers that support the church’s dome. These support piers — each nearly 150 feet tall — contain galleries at the top. Called the “Loggias of the Relics,” these galleries were commissioned by Pope Urban VIII in 1624 to hold the Holy Lance, Veronica’s Veil, the head of St. Andrew and pieces of the True Cross. Fifteen-foot tall statues beneath the loggias represent the saints connected with these relics: St. Longinus, St. Veronica, St. Andrew and St. Helen. Longinus’ statue was the work of Gian Lorenzo Bernini, who also designed the basilica’s baldachin (bronze canopy) over the main altar and the colonnade of pillars that ring St. Peter’s Square.

According to the Catholic Encyclopedia, it was Pope Innocent VIII, in 1492, who received the Holy Lance from the Turkish Sultan Bajazet II in exchange for the sultan’s brother, Djem, who was a prisoner in Rome. However, as is often the case with relics, there are other lances that claim to be the Holy Lance around the world. These include a lance that was in Paris until the French Revolution — there is speculation that it was only part of the lance, the tip of the lance, that later went to the Vatican. There is also a relic in Vienna, called the “Lance of St. Maurice,” that belonged to the imperial house of Austria-Hungary.

The Catholic website Aleteia.org mentions another story that still circulates that this Austrian lance was captured by the Nazis in World War II, but returned to Vienna after the war. This Lance of St. Maurice is displayed in the Imperial Treasury at the Hofburg Palace in Vienna. The Catholic Encyclopedia also mentions this lance of St. Maurice and traces it as far back as 1273. It says the lance was used at coronation ceremonies of the Emperor of the Western Empire of Rome and claimed as belonging to the Roman Emperor Constantine.

The other common story about the Holy Lance — the one in Rome — is that it played a role in the Crusades, specifically the First Crusade from 1096 to 1099. In June 1098, the Crusaders were trapped in the city of Antioch by Muslims troops. Food and water ran low and all seemed lost. Then a disreputable man from France, Peter Bartholomew, claimed to have had a vision from St. Andrew who told him where to find the Holy Lance. It was said to be in the Cathedral of St. Peter in Antioch. Bartholomew convinced Count Raymond of Provençe, one of the leaders of the Crusade, and digging for the relic started. No one found the lance until Bartholomew suddenly jumped in the hole and pulled out a piece of iron.

Whether or not this piece of metal was the true relic, its discovery won over the Crusaders. Renewed in fervor, they stormed out of the city and attacked the Muslims on June 15. They won the day. Count Raymond kept the relic, first in Constantinople. It later ended up in Rome.

Whether or not any of these lances is the one that pierced Christ’s side, the story of conversion at the foot of the Cross is one to contemplate as Holy Week approaches.