MANITOWOC — Don and Elsie Krajnik, who will celebrate their 67th wedding anniversary in May, have much for which to be grateful: their 12 children, 45 grandchildren (two who have passed away) and 48 great-grandchildren.

They are also grateful for having received the second of their two COVID-19 vaccinations a few weeks ago, which they hope will soon lead to a return to their annual family gatherings and to regular Mass attendance at Felician Village. They have lived at the senior living community  since September 2020. 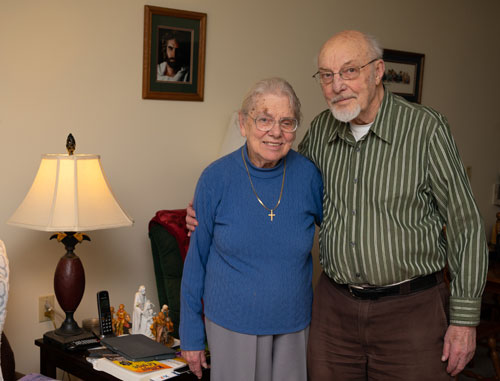 While the COVID-19 pandemic has disrupted the lives of everyone in some way, for Don and Elsie, it has meant the end of a 20-year religious devotion they began at Holy Cross Church in Mishicot, where they are still members. On March 3, 2000, the couple (Don admits that it was mostly Elsie’s doing) began the first Friday devotion to the Sacred Heart of Jesus.

Elsie said that she had begun first Saturday devotions at the church in 1995, but they were not well attended. She then asked the pastor at the time, Fr. John Neuser, if she could begin first Friday devotions. The morning began with Mass, followed by private prayer before the Blessed Sacrament until noon.

When Fr. Paul Paider was appointed pastor in 2003, he began exposition of the Blessed Sacrament after Mass, with a monstrance containing a consecrated host on the altar. The hours for devotion were also extended until 6 p.m. This schedule continued when Fr. John Becker was assigned to the parish in 2011.

While Elsie was in charge of signing up parishioners and seeing to it that at least two people were present before the Blessed Sacrament each hour, Don, who was an extraordinary minister of holy Communion, was commissioned by Fr. Becker to return the Blessed Sacrament to the tabernacle in the evening and then lock the church.

When the pandemic shut down churches across the diocese and the country in March 2020, it also ended 243 months of first Friday devotions. The final devotion the couple oversaw was on March 6, 2020.

Last month, the first Friday devotion — a traditional Catholic devotion that is part of the so-called “12 promises of the Sacred Heart” attributed to St. Margaret Mary Alacoque — returned to Holy Cross. And, while the Krajniks no longer are in charge, they participated and were happy to see the devotion back in Mishicot.

The couple’s roots in Mishicot run deep. While Elsie was born in De Pere, Don said he moved to Mishicot with his parents, Ed and Clara, when he was 6 months old. His father had opened a car dealership in Mishicot. Today, the dealership, Krajnik Chevrolet, is located in Two Rivers and is operated by four of the couple’s 12 children.

Don and Elsie met in 1951, when one of Elsie’s sisters and Don’s cousin were married. “We keep telling them we’ll never forgive them,” Don said jokingly. “Nine months after we met, I went into the service,” he added.

After two years in the Navy, they were married on May 26, 1954. Three months later, Don was assigned to sea duty. “So I brought her back home” to live with his parents in Mishicot, he said.

“Then (Don’s parents) built a home, like a block or so away, and, the day he came home, they moved into their house and that was our house,” said Elsie. They remained in their house until moving to Felician Village last year.

Don began working at his father’s dealership as a mechanic, a skill he honed in the Navy. “My father made me a partner in 1965,” he said.

While Don spent his days at the dealership, Elsie was responsible for raising their children. “We had 12 kids in 17 years and I was a strict mom,” she said. Don added: “She did disciplining, with me backing her up. There was no getting between us. I tell you, we raised the first two strictly and they didn’t let the next 10 get away with anything that they couldn’t get away with.”

Attending Sunday Mass meant going to church at different times. “He went early and I went later,” said Elsie. “I didn’t take too many kids, maybe four or five. Once they were older, they got to be babysitting.”

That’s also when Elsie joined the parish choir. She continued in the choir for about 40 years, until after she lost sight in one eye and it made it difficult to read music.

Don said he retired from the car business around 2005. “I retired from the active part of the business so I could sneak home on Fridays at five to spend an hour there and then go to church and put the sacrament into repose,” he said. “Before that, I wasn’t there (on first Fridays) that often, not like she was.”

He continued to run errands and sweep floors at the dealership until his 81st birthday. “Elsie used to come down and do cleaning in the showroom and offices from about the same age, 72 to 81. Then we both retired at the same time,” said Don.

The Krajniks are also remembered in the parish for serving on various committees and ministries — Don was a parish pastoral council member for about 10 years and an altar server at daily Mass.

But the first Friday devotions to the Sacred Heart of Jesus will always be their most cherished. Don takes little credit, however, saying the devotion “just evolved.”

“There was no conscious effort on my part to get started in it. Actually, most of it was to keep (Elsie) off my back,” he said with a wide smile. “Happy wife, happy home. … It’s a good thing the Lord takes sinners the way they are, otherwise I wouldn’t stand a chance.”

Words to live by: Don, “Happy wife, happy home.” Elsie, “Wait ‘til your father gets home.”