Before the lilies, we study the message of the Passion in petals

Flowers  symbolize Easter — from the pure white lily to the purple and yellow crocus and fragrant hyacinth. But another flower comes to us before Easter and symbolizes Passion Week. 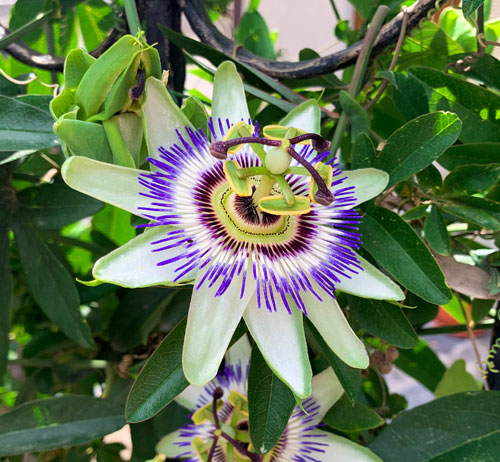 This close up view shows a blue passion flower, known as Passiflora caerulea, in a garden. The various parts of the flower have been used to teach about Christ’s Passion from missionary times in Latin and South America. (Bigstockphoto.com)

The passion flower is a native of Latin America. Growing on a woody, fast-growing vine, it is adorned with large flowers — originally purple, but now hybridized into many shades. It also produces the oval, edible passion fruit.

In the last two centuries, associating flowers with various saints — most especially the Virgin Mary — has become increasingly popular. Mary Gardens and Bible Gardens can be found in many countries, including Mary’s Garden at the National Shrine of the Immaculate Conception in Washington, D.C., and both a Mary Garden and Rosary Garden at St. Francis Xavier Cathedral in Green Bay.

The passion flower was first associated with the serpent gods of the indigenous tribes of Latin America and South America. When Spanish explorers arrived, they brought Catholic missionaries. These priests quickly noticed the large, purple flower and called it flor de las cinco llagas, or “flower of the five wounds.”

Once this flower (passioflora) was brought back to Europe, it became known by various names, including Christus-Krone in German (“Christ’s Crown”) and espina de Christo in Spanish for the “crown of thorns,” as well as flor-da-Paixão in Portuguese and, of course, “passion flower.”

We know that some saints have used plants to explain the Christian faith — such as St. Patrick’s shamrock or St. Boniface’s evergreen tree. The passion flower lent itself to similar catechism teaching.

As John S. Stokes Jr., founder of Mary’s Gardens noted, flowers like the passion flower “gave a specific focus of Christian faith to the religious sense of nature, and also provided a visual means of teaching the Gospel story …” Stokes and other other authors singled out the passion flower as such a tool, and showed how it was used to teach about Christ’s Passion. These included:

Much of this passion flower symbolism used by the early missionaries is credited to one of them, a Mexican Augustinian friar, Emmanuel de Villegas. He sketched the flower and took it back with him to Europe in 1610. Even though he was the artist, the symbolism credit often goes to a monk of the Order of St. John of Jerusalem, Jacomo Bosio. It was to Bosio that de Villegas showed his artwork.

Later in history, more symbolism was added, including:

One cookbook author, Patrick Jesse Pons-Worley, described passion fruit as “fruit caviar. It tastes like a combination of pineapple and guava.” Passion fruit juice is popular with shave ice in places like Hawaii and is also used in jams and jellies.

However else it is used, the showy flower, whether in purple or one of the many shades of its later descendants, can still remind us of Christ, both his sorrowful passion and the newness of life that his resurrection brought.