ONEIDA — The fast-paced atmosphere in the intensive care unit (ICU) at HSHS (Hospital Sisters Health System) St. Vincent Hospital in Green Bay is not for everyone, but it was the perfect fit for registered nurse Barb Zahn for nearly 38 years.

She developed her work ethic at a young age on the family farm in Kunesh. Zahn is the oldest of six children. 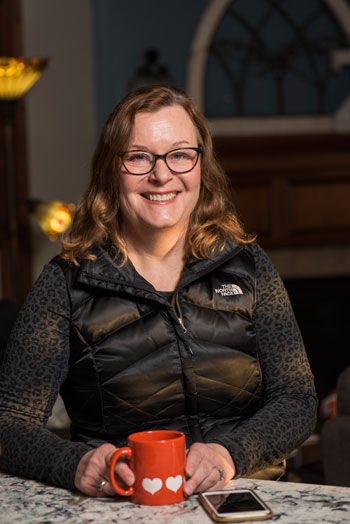 Barb Zahn retired on Dec. 31, 2021, following nearly 38 years as a registered nurse in the intensive care unit at HSHS St. Vincent Hospital in Green Bay. Zahn appreciated the opportunity to pray for her patients as a way to live out her faith. (Scott Eastman | For The Compass)

“The girls worked just like the boys,” she said. “The emphasis was on faith, family and education. My dad (Frank Schuh) was the oldest of 10, so he had to help out at home. He didn’t get to go to school much. My mom (Janet) was third in line in her family. She wanted to go to college, but the money ran out. So (education) was important to them, in addition to our faith.”

“Back then, I thought you were either a teacher, secretary or a nurse. I chose nursing because I thought, ‘I can’t type very fast and I didn’t want to be in a classroom with a bunch of kids,’” she said with a laugh. “My mom and I were usually the ones helping the baby animals on the farm. I would help birth the animals and give shots to the cows. I had an interest in science.”

Working at HSHS St. Vincent Hospital, where she was born, provided Zahn an opportunity to give back.

“I was a premature baby. They were able to save me,” she said. “I always felt that it came around. I was back there to save people. I started in the neuroscience ICU, but then they combined the ICU.”

Serving at a Catholic hospital provided comfort for Zahn to live out her faith. She regularly prayed for her patients and shared with them that they were in her thoughts and prayers.

“Regardless of their faith, I would say that to them if I was leaving the shift, handing them off to the next person or if they were having struggles,” she said. “That was important to me. We also had the pastoral care department with different clergy or pastoral care people to aid us. It was always good to have them to lean on.”

“I also tried helping the family members through it,” added Zahn. “It’s not just the patients. Being from this area, there were quite a few (patients and family members) that I knew.”

Zahn worked 12-hour shifts, sometimes without breaks or lunch periods. The rewards were to help people heal and become well. Some former patients would visit when they returned for rehabilitation sessions on the hospital’s second floor. There were also plenty of difficult days.

“We saw people who were in car accidents with spinal cord injuries. There was a young man we had in the unit over a year. We all got to know him quite well because we took turns taking care of him,” she said. “You got to know the family. I still think of him.”
This past year, Zahn worked numerous shifts in the ICU designated for patients who were COVID-19 positive. It was difficult not having family members present to comfort their loved ones.

“You let them know that you were there at their side,” she said. “My motto this past year was ‘Doing the best I can with what I’ve got.’”

A stop at the hospital chapel helped on some of the difficult days.

“They used to have Mass frequently (at the chapel),” said Zahn. “I would pop in, usually after shifts, for some solitude. It’s very quiet. There is a book where you can write your intentions.”

The hospital has provided faith opportunities. Zahn participated in the mission outreach program at the Hospital Sisters of St. Francis’ motherhouse in Springfield, Ill., and a “Risen Retreat” for HSHS St. Vincent Hospital staff at St. Norbert Abbey in De Pere.
“(The retreat) was a two-week course with speakers. It was spiritually and emotionally uplifting,” she said. “It was designed to help you get through the tough parts of your job.

We also were able to get to know different people from throughout the hospital.”

Zahn and her husband, Tom, have three children, Courtney Socha, who is married to Mitchell; Cassie and Brett. She grew up as a member of Assumption B.V.M. Parish in Pulaski, and has a long history with her current parish, SS. Edward and Isidore in Flintville. She recalls attending Mass in Flintville at a young age.

“My dad was working shift work, so my grandpa (Clement Schuh) would pick us up and take us to SS. Edward and Isidore,” she said. “I have family members there, quite a few aunts and uncles. My grandparents (Clement and Lucille) are buried in the cemetery.”

Zahn has served on the parish funeral committee and filled in as an extraordinary minister of holy Communion when her work schedule allowed. She also participates in a Bible study. She recently started the “Bible in a Year” podcast with Fr. Mike Schmitz.

An image of the Last Supper on display in the Zahn home represents both faith and family. It was originally a gift that her paternal grandparents received on their wedding day, Oct. 2, 1934. The image was reframed by her stepmother, Rose, who died recently. Her mother, Janet, died when Zahn was 27.

“Clem and Lucille (her paternal grandparents) were also my godparents,” she explained. “Our farm was right near theirs, so we helped them on the farm. We were close. When my dad died in 2016, (the Last Supper image) was passed to me. It means a lot to me.”

Zahn’s retirement plans include a trip to Alaska, catching up on some cross stitch projects and learning how to use her “fancy camera.” She doesn’t miss the long hours at the hospital.

“I miss the people,” she said. “I know that I was at a good place and in a good organization.”