CHAMPION — If you’d like to see relics of the Holy Family, a visit to the National Shrine of Our Lady of Good Help might be in order.

A relic of the True Cross of Christ is currently on loan there.

“Believe it or not, this person was cleaning out a (deceased) relative’s drawer and they found (the relic of the Cross) in a drawer,” explained Father of Mercy John Broussard, rector at the Shrine. 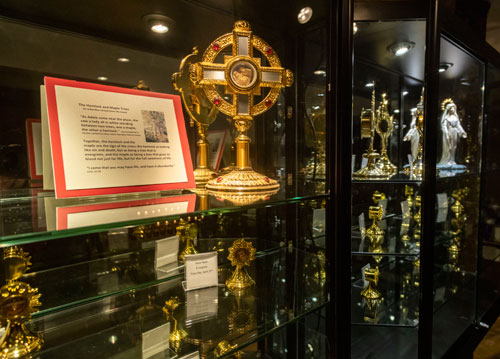 A new reliquary case has been installed behind the Lady of Grace statue, located in the Apparition Oratory, in the lower level of the Apparition Chapel. On display is a relic of the True Cross of Christ and relics of St. Teresa of Kolkata and St. Faustina Kowalska. (Mike Roemer | Special To The Compass)

He added that the True Cross relic is the most significant relic on display at the Shrine. “Most of those (True Cross) relics come directly from Rome,” he said, “because they have the True Cross in the archives there.”

Also at the Shrine, though not yet on display because Fr. Broussard is still authenticating paperwork, are relics of Mary and Joseph. One relic comes from the Blessed Mother’s mantle and the other is part of St. Joseph’s cloak. These two relics will become part of a permanent relics display that opened at the Shrine earlier this year after renovations to the oratory chapel (see article, page ?).

This Pentecost (May 23), the anniversary of the Holy Spirit’s descent upon the 12 Apostles in the Upper Room, will be special at the Shrine. The relics display now contains a complete set of relics from each of the 12 Apostles as well as the four evangelists. The relics of the Apostles will receive special veneration on Pentecost.

Fr. Broussard said that, over the years, the Shrine has received relic donations, including one of St. Teresa of Kolkata and St. Faustina Kowalska. The number, though, increased in one jump.

“Suddenly,” Fr. Broussard said, “I had a priest come forward with a bunch of relics that he wanted to donate to the Shrine. He provided all the paperwork with them when he donated them.”

That priest donated the relics of the Apostles and the evangelists.

“So, after some research and making sure they were authentic, we decided that it would be great to display all of them,” Fr. Broussard said. “When we renovated the downstairs oratory, we decided to include a relic case, a giant sort of reliquary case, where we could put them all.”

So far, there are 16 to 17 relics in the display, according to Fr. Broussard. There are another two relics that are in the process of being authenticated: St. Teresa of Avila and St. Lucy.

The display also contains relics from the roots of the now-gone trees where Adele Brise had her visions of the Blessed Mother in 1859. Those trees were a maple and a hemlock, according to the Shrine’s history.

Other than the trees, all the relics are first-class relics, which means that they came from the actual body of the saint. First-class relics can be pieces of bones, hair or even blood.

“The relics represent, for us, two things,” Fr. Broussard said about the display’s importance. “First, they are (from) men and women who lived before us who were worthy of veneration and worthy of our respect insofar as that they are very close to God. So we are reminded to ask for their intercession, to ask for their prayers. We believe that they are standing before God’s throne and are very influential in that regard.

“Secondly, (relics) remind us that we are body and soul and that, after death, we still reverence the body — especially with regard to the saints who were perfected by God’s grace,” he continued “God’s grace affects not only their souls, but even purifies their very flesh. That is remembered when we reverence the relics of the saintly men and women who went before us: God’s grace is still imbued within their very bodies. So we give that its due honor and veneration.”

The relics have been enthusiastically received by Shrine pilgrims, said Fr. Broussard.

“They love it. It’s something unique,” he said. “Not a lot of people have the experience of looking at relics. And it really adds to the pilgrims’ experience and their prayer, especially in the oratory.”

The Shrine staff hopes to expand the relics display. All relics, in order to be displayed at a shrine or church must be authenticated. Fr. Broussard said that anyone who might have relics is welcome to contact the Shrine. “We would be happy to look at them,” he said.