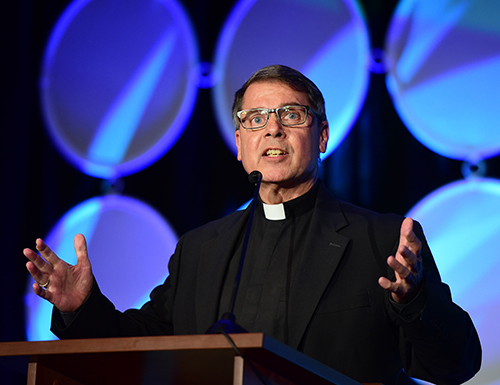 Bishop-elect Dan Felton is pictured during the Catholic Media Conference in Green Bay in May 2018. (Sam Lucero | The Compass)

ALLOUEZ — Even though the skies were cloudy and rainy, it was a day of bright excitement and hope for the 400,000 people of the Diocese of Duluth.

“I’m just so excited to be here,” said Bishop-designate Dan Felton as he was introduced as the 10th bishop of Duluth. “Really, it’s new life for me, and resurrection,” he said at an April 7 press conference.

Bishop-designate Felton, 66, who has been a priest of the Diocese of Green Bay for 40 years and, most recently, its vicar general and moderator of the Curia, began his time in Duluth in his usual fashion — with a song.

“Glory and Praise to our God,” Bishop-designate Felton sang.

Anyone who has heard one of his homilies knows that song is part of the message and the backbone of that particular day’s homily. So it was on April 7.

The bishop-designate gave “glory and praise” to God for his appointment, for Pope Francis, the Holy Spirit, his personal family (including his mother, Carol, and late father, Ken, and his four sisters), the people of Duluth (“my new family”), his friends, parishioners and “brother priests” in the Diocese of Green Bay, and the “the holy men and women who have gone before us, but are still with us, guiding us.”

Echoing the mission of the Diocese of Green Bay, Bishop-designate Felton said that he believes his new diocese’s charge from God is to be “missionary disciples trying to lead all people to heaven.”

He elaborated on the vision he sees for his new diocese: “The purpose and the mission is very simple. God put us into place so that we could help the over 400,000 people (of the Duluth Diocese) to help them believe that they are loved by God the Father, … help them to discover, to be accompanied by and to worship and to share the Lord Jesus Christ as lord and savior.”

But, he added, it was on his mind all through Holy Week.

“When we walk with Jesus in a powerful way, to die to certain things in our lives,” he said. “… (that) through the power of Christ, we might see new life and resurrection.”

“In my own life,” he continued, “there’s a part of me that’s having to let go. I’ve been a priest for 40 years in the Diocese of Green Bay. … (so) you kind of let go as Jesus had to on the cross, but it’s a way to resurrection and new life.”

After his press conference, Bishop-designate Felton returned to Green Bay. “There is a little bit of in-between time. I need to go back to Green Bay and bring closure to some things there,” he explained, adding that “Then I’ll make the move and be here for a long time.”

His ordination as bishop and installation as the ordinary of Duluth will take place on Thursday, May 20, at the Cathedral of Our Lady of the Rosary in Duluth.

As he prepares to leave Green Bay, the bishop-designate said that he gives “glory and praise” to God for the people of his home diocese and his colleagues at the diocesan offices.

Bishop-designate Felton also paid tribute to his predecessor, Bishop Paul Sirba of Duluth, who died suddenly on Dec. 1, 2019, after serving the Duluth Diocese for 10 years.

“I’m asking him to guide me in how to be best your spiritual father as we move ahead,” the bishop-designate said.

When asked what he was looking forward to in his new position, Bishop-designate Felton said there were several things, including celebrating school Masses and confirmations.