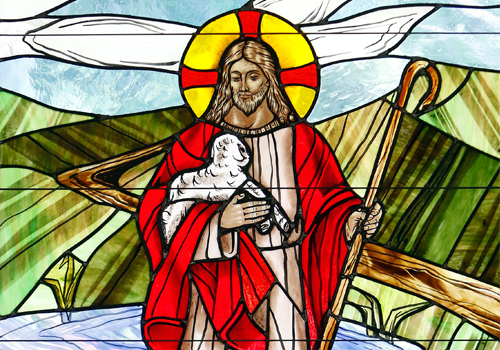 Jesus the Good Shepherd is depicted in a stained-glass window at Our Lady of the Island Shrine in Manorville, N.Y. Good Shepherd Sunday is observed on the fourth Sunday of Easter, which is April 25 this year. (CNS photo/Gregory A. Shemitz)

This Sunday, April 25, is the Fourth Sunday of Easter. It is often called “Good Shepherd Sunday.” The name comes because, even though there is a three-year cycle to the Sunday Gospel readings, this particular Sunday of each year always contains part of the 10th chapter of the Gospel of John. This chapter contains what is known as “the Good Shepherd Discourse.” (Prior to the changes in the liturgy following the Second Vatican Council, the Good Shepherd readings from John were read on the Third Sunday of Easter.)

The image of the Good Shepherd holding a lamb or an injured sheep on his shoulders is familiar to all of us. The image of the lamb in Jesus’ arms is one of the reasons some parishes celebrate first Communions on the Fourth Sunday of Easter.

The author of the Catholic art blogspot imaginemdei.blogspot.com notes that this image of Jesus holding a lamb has been popular in religious art since the 17th century — largely due to the work of Bartolome Murillo, a Spanish Baroque painter. It became even more popular in Victorian times.

However, the image of the Good Shepherd as a young man holding a sheep on his shoulders was one of the first Christian images used for Jesus. It can be found in third- and fourth-century catacombs. There is even such an image in the Roman catacomb of Domatilla, where burials date back to the first century A.D. The image serves as a reminder of Luke’s Gospel about the shepherd who goes in search of the lost sheep (Lk 10:1-7).

Shepherds often appear in the Old Testament. Abel was the first shepherd mentioned in Scripture. Abraham and Job owned vast flocks. Jacob and his sons all tended sheep. Even some prophets served as shepherds, including Amos and Moses, the Lawgiver. King David started out as a shepherd for his father, Jesse. And Luke also tells us that shepherds were visited by angels at Jesus’ birth.

Flocks of sheep and goats were so crucial to the economy of the ancient Middle East that many of its rulers were called “shepherd kings.” The kings of Sumeria, ruling 4,000 years before Christ in what is now southern Iraq, were depicted as wearing crowns resembling shepherds’ hats.

For ancient Israel, this image of the provident shepherd-king was meant to point to God as the ideal shepherd. We see this exemplified in many places in the Old Testament — such as Ezekiel 34; Zechariah 10; Jeremiah 23 and many of the psalms. The best known is Psalm 23, where trust in the Lord’s care is expressed in the opening words: “The Lord is my shepherd.”

Rabbi Shlomo Kesselman, who teaches Jewish law to rabbinical students at Central Lubavitch Yeshiva in Brooklyn, N.Y., notes that Psalm 23 expresses trust in God. “The psalm is a timeless testament to the rock solid faith of the Jewish people in knowing that God is always with us, protecting and guiding our path,” the rabbi explained.

Jesus and his followers were certainly aware of these images of God as a shepherd, so it was understandable that Jesus would use sheep and shepherds in his teachings and parables.

As St. John Paul II noted, it was also natural for Jesus to link himself to the image of the divine shepherd. Jesus went even further, as the late pope noted on Good Shepherd Sunday in 1998: “In his preaching, Jesus refers to this image, but introduces a completely new element: the shepherd is the one who lays down his life for his sheep, … The Father has sent him into the world so that he will not be the shepherd of Israel alone, but of all humanity.”

Sheep’s main characteristic is that they flock. They group together, stay together and follow a leader. This instinct makes sheep easy to herd and very social in nature.

Sheep are so programmed to follow each other. In fact, they can’t do anything else, and become frantic if separated. This usually works in their favor because a predator will not attack an entire flock, preferring to pick off stragglers.

Additionally, since sheep have great hearing, they can follow one shepherd easily. And, yes, sheep do recognize their shepherd’s voice. This is why people of Gospel times knew exactly what Jesus meant when he said, “My sheep hear my voice; I know them, and they follow me” (Jn 10:27).

Since 1964, the Fourth Sunday of Easter has also been World Day of Prayer for Vocations, recognizing that the role of shepherd has been shared by Jesus ever since he sent his disciples out “two by two.”

As Pope Francis said in 2020 on that Fourth Sunday of Easter, “Vocations are born within the church. … No one is called exclusively for a particular region, or for a group or for an ecclesial movement, but rather for the church and for the world.”

Just as sheep hear the voice of their shepherd, so the call to lead people to Christ, the Good Shepherd, is shared for the good of the entire flock of Christ.