What does church history, teaching, say about tattoos? 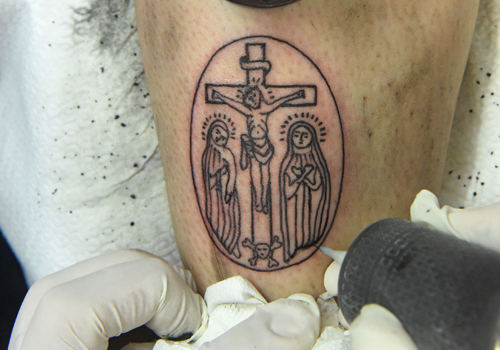 Wassim Razzouk tattoos a crucifixion scene from a 300-year-old wooden block onto the leg of a tourist from France in the Old City of Jerusalem April 9, 2018. The Razzouk family has been tattooing Christian pilgrims in the Holy Land for 500 years, and 200 years before that in Egypt. Tattoos, besides being body art, have had a religious history. (CNS photo | Debbie Hill)

Do you have a tattoo?

Once the mark of sailors, tattoos have become commonplace today. At least a third of Americans have some form of ink, according to several pollsters, including IPSOS (2019), an international marketing firm based in Paris.

Tattoos have become so popular that Pope Francis has spoken about them. In a March 2018 meeting with 300 young adults at the Legionaries of Christ’s Maria Mater Ecclesia College in Rome, a seminarian asked the pope about how a priest should react to tattoos.

“Don’t be afraid of tattoos,” the pope responded, quoted by a Catholic News Service story. “Of course, there can be exaggerations,” the pope said, but added that tattoos can be “a sign of belonging for young people, and a great way for parish ministers to begin a conversation with young people.”

Some church members would say marking your body in a permanent fashion is wrong, period. Others, while not saying it is “wrong,” view it as unhealthy — risking infection. Still others feel that a permanent mark to record something that may be fleeting could be unwise. “When you have grandchildren, would you want them to see ‘that’ on your arm?”

Yes, the Bible does address tattoos: “Do not lacerate your bodies for the dead, and do not tattoo yourselves, I am the Lord” (Lev 19:28).

However, while this became the basis for a Jewish tradition against tattoos, it had a very specific reason that was important to the Jewish people who were a minority in the Middle East.

As Rabbi Baruch Davidson, who writes for the Jewish practices site Chabad.org, notes: “In ancient times, it was customary for idol-worshippers to tattoo themselves as a sign of commitment to their deity — much like an animal that is branded by its owner. On many occasions, the Torah (Jewish Scripture) forbids practices that emulate pagan customs, considering that following their traditions is the first step towards subscribing to their idolatrous beliefs and services.”

As Pope Francis also pointed out in 2018, for centuries, many Christians, including Eritrean Christians, have tattooed the cross on their bodies.

Eritrean Christians belong to the Coptic Orthodox Church, one of the oldest Christian churches, started in Alexandria in Africa. Tradition says the Coptic Church was founded by St. Mark the Evangelist.

While it is traditional among Copts to have a cross tattoo, in some Muslim countries, such as Egypt, a cross tattoo allows Copts safe entry into their church buildings. The cross is usually inked on their wrist, but can also be on their hands.

The tradition of Coptic tattoos — crosses or other devotional emblems — dates back to at least the eighth century, perhaps as early as the sixth century. Today, it is somewhat of a tradition to seek a Coptic tattoo after one has visited Jerusalem — even if you aren’t a Coptic Christian.

One of those tattoo artists is Wassim Razzouk, who runs a family business in the Old City of Jerusalem. His family’s trade goes back 700 years.

“We are Copts,” he told Catholic News Agency in 2017. “We come from Egypt and, in Egypt, there is a tradition of tattooing Christians. And my great, great ancestors were some of those tattooing the Christian Copts.” (The business can be found at razzouktattoo.com.)

Some of Wassim’s ancestors no doubt met the Crusaders who came to Jerusalem. European soldiers journeyed to the Holy Land in the Crusades that began in 1095. There, they discovered this tattoo practice and many came back with ink images. And the tattoo tradition spread.

It’s important to remember that, besides religious ties, there are also medical tattoos. These are used to prepare for surgery, as well as for certain cancer treatments.

No, the church does not expressly forbid tattoos. However, it presents some concerns which raise questions to consider as tattoos become more and more popular as a form of personal expression.

Still, tattoos remain popular. One young man from Turkey, Markus Essen, spoke to Catholic News Service in 2018 as he waited outside the Razzouk shop to get a tattoo to match several religious ones he already had: “This is the oldest tradition. It connects us across generations,” he noted. Pointing to the cross tattooed on his right hand, he explained that it reminds him of God’s love: “It says, ‘I am Christian.’”