Kay Kraeger shares her passion for Bible study with others 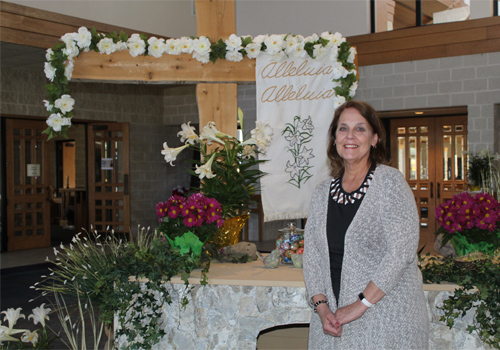 Your Catholic Neighbor: Kay Kraeger (Angie Landsverk | For the Compass)

WAUPACA — Kay Kraeger begins each day by asking God a question. It is always the same question:“Here I am Lord. What would you like me to do for you today?”

Among her many parish activities (she co-chairs the annual rummage sale, makes blankets for high school seniors and helps with the Scrip gift card fundraiser), her passion is co-facilitating a Bible study group.

“The only way you can really get to know the Lord is through reading the Bible,” Kraeger said. She grew up in the Lutheran Church. Children start studying the Bible in Sunday school at age 3, she said, and she continued it through her senior year of high school.

“My confirmation class was every Saturday for three hours of memorizing Bible verses and learning the catechism,” she said. “Every Friday night, my parents would sit and quiz me for the test that I had each Saturday.”

Her parents were active in their church and role models for how to live faith-filled lives. The first thing Kraeger said she saw when she woke up each day was her mother reading her Bible at the kitchen table. Both of her parents taught Sunday school for years, and Kraeger remembers them reading their devotional books and passages out of their Bibles when she kissed them goodnight.

When she met and later married her husband, Allen, she continued her Bible study. Allen was raised Catholic and joined the Lutheran Church when they married.

In 2008, Kraeger said she found it difficult to stay in her church when the Evangelical Lutheran Church of America began making changes. “For five years, I prayed and prayed to the Holy Spirit to lead us to a church,” she said. “We didn’t know where to go.”

After 34 years in her church, she said, the friends they were leaving felt like family. One Sunday morning, her husband suggested they go to the Catholic Church. Kraeger’s sister, Amy, is Catholic and had suggested the same thing.

“We sat in the very back, as far as we could sit, and I watched,” Kraeger said. “It was amazing, the liturgy and music brought back memories of my childhood.” On the verge of tears, she wondered how the church knew her old liturgy. She began to wonder if she could become a Catholic and kept praying to the Holy Spirit to guide her and Allen to a church.

In 2012, her sister, Amy, told her that she was going to the Holy Land with a group of Franciscans from Steubenville, Ohio.

Around the same time, Kraeger had back surgery and knew she could not go on the trip if she was in pain. She signed up anyway and told God, the night before the trip, that she needed to be pain free. Her prayer was answered.

Kraeger continued praying to the Holy Spirit during that trip. While visiting the site where Jesus took the disciples and asked them, “Who do you say that I am?” she said she heard the voice of the Holy Spirit tell her to become a Catholic.

When she returned home and told Allen, he was skeptical about her decision. But Kraeger started going to Bible study at St. Gabriel the Archangel Church in Neenah with her sister.

Kraeger was received into the Catholic faith at the Easter Vigil in 2013. Allen was her sponsor. A year later, she became a co-facilitator of St. Mary Magdalene’s Bible study. “I can’t believe the growth in the people who have taken the classes,” she said. “They know the church. They know that part of it.”

She also learns from them and said they keep coming back. Two classes are held each week during the school year, with a total of 25 people involved. “Bible study is just part of my life, and when I don’t have it, I miss it,” Kraeger said.

She uses different sources of material and often brings what she studied at St. Gabriel’s to St. Mary Magdalene. The church is blessed with online Bible study resources, so people can study from home as well, she said.

“We can never stop learning,” Kraeger added. “The Bible is so alive. I get so excited studying and seeing how everything goes together.”

Your Catholic Neighbor
Name: Kay Kraeger
Parish: St. Mary Magdalene, Waupaca
Age: 66
Favorite saint: Monica
Words to live by: “Be faithful unto death, and I will give you a crown of life.”