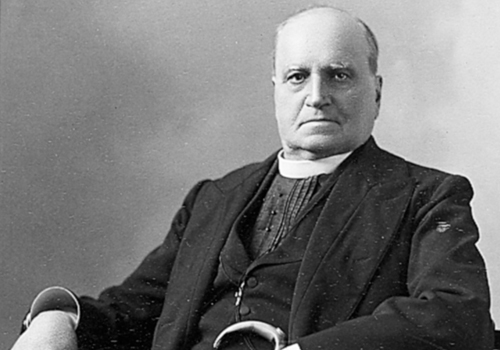 Fr. Peter Pernin, a Canadian missionary priest who served as pastor at St. Mary Parish in Pestigo and Our Lady of Lourdes Parish in Marinette in 1871, wrote one of the most descriptive accounts of the Peshtigo Fire in his memoir, “The Finger of God Was There.”

ALLOUEZ — This fall, images of fiery leaves will pair with memories of the Peshtigo Fire. It was on Oct. 8, 1871, 150 years ago, when a storm system that fueled the Great Chicago Fire also spawned the Peshtigo Fire. This series of blazes, firestorms and fire tornadoes destroyed 2,400 square miles — roughly the size of the state of Delaware — and killed 1,500 to 2,500 people. And the fires also figure in the history of the National Shrine of Our Lady of Good Help.

This year, the Shrine, as it does each year, will again mark the anniversary of this tragedy with prayer and remembrance. The Shrine and its founder, Adele Brise, played a role in the story of the fiery night.

Adele Brise, of what was then known as “the Chapel” at Robinsonville (now the National Shrine of Our Lady of Good Help at Champion), and Fr. Peter Pernin, a Canadian missionary priest serving as pastor at St. Mary in Peshtigo and Our Lady of Lourdes in Marinette, both lived through that night of fire. (Marinette and its neighbor, Menominee, Mich., were also extensively damaged in the fires.)

Every year, the Shrine hosts an anniversary rosary and prayer event all night from Oct. 8 to Oct. 9. Today it is known as the “Victory Over the Fire All-Night Rosary,” with the commemoration beginning at 7 p.m. with a remembrance service. The evening includes a candlelight procession around the outdoor rosary walk, all-night Adoration of the Blessed Sacrament and rosaries prayed every hour. Joining participants are descendants of families who lived through that October night.

Fires had been burning in the area around and north of Green Bay for months prior to October. Drought conditions dried up creeks and marshes, and the flourishing lumber industry had left the region strewn with huge amounts of tree debris and branches — called “slash.” Peshtigo was a city built, literally, on sawdust.

Sr. Pius Doyle, one of the foundresses of the Sisters of St. Francis of the Holy Cross, recorded events of late summer and fall 1871, noting how immigrant farmers were also clearing surrounding timberland for fields. Prairie fires resulted.

“Early in August in the afternoon,” Sr. Pius wrote, “the sun would be obscured, owing to the fire which steadily worsened so that, towards the end of the month, it was becoming frightful.”

Nothing, though, can describe the horror of the firestorm that hit — including fire tornadoes and whirlwinds that witnesses described as sounding like freight trains. The fire was so intense that it had the power of a thermonuclear bomb and temperatures so high that people were cremated as they fled.

Fr. Pernin managed to save the tabernacle from his church and carry it, while dragging his wagon to the Peshtigo River. In the jostling and bedlam, the wagon was pushed into the water and the tabernacle floated away. The next day, it was found, resting upright and dry, on a log in the river — with the sacred species safe inside. Today, the tabernacle spends part of the year at St. Mary, Peshtigo, and the summer at the Peshtigo Fire Museum.

Fr. Pernin described the scene at the river in his memoir, “The Finger of God Was There.”

“I chanced to look either to the right or left, before me or upwards, I saw nothing but flames. … I saw nothing but immense volumes of flames covering the firmament, rolling one over the other with stormy violence …”

Fr. Pernin survived that night by staying in the river, though his eyes were damaged by the heat and he became sick from the chill of being soaked in the cold water. Many people stayed in the river that night.

Further south and east of Peshtigo, lower Door County and northern Brown and Kewaunee counties were also burning. The town of Brussels was destroyed by the fire. Adele Brise and her companions at the Chapel knew they could not escape the fire. So they took up a statue of Mary and bore it in procession around the grounds. They were joined by local people fleeing to the site. Fr. Pernin, in recording what Adele told him later, said they processed on their knees, praying the rosary.

“When the flame and wind blew so strongly in the direction of the chapel as to prevent their further progress, unless they exposed themselves to suffocation,” Fr. Pernin wrote, “they awaited a lull in the storm or turning in another direction (and) continued to hope and pray.”

By morning, he continued, all “the houses and fences in the neighborhood had been burned with the exception of the school, the chapel and fence surrounding the six acres of land consecrated to the Blessed Virgin.”

Fr. Pernin noted that the area not burned by the fire, a “winding path surrounding the enclosure being only eight or 10 feet wide, … now shone out like an emerald island amid a sea of ashes.”

The priest, who rebuilt his two churches, stopped short of calling either the salvaging of the Peshtigo tabernacle or the survival of the Chapel grounds a miracle. But, he “earnestly counseled” anyone who could do so to visit Adele to question her about the events and “return edified and happy at heart.”

The Peshtigo tabernacle was later moved to Marinette. Today, the tabernacle is kept in a special room next to the sacristy of St. Mary Church in Peshtigo most of the year.

Last summer, due to COVID-19, the Peshtigo Fire Museum did not open. This year, it will open on Memorial Day and the tabernacle is scheduled to be there. The museum, located in the former church building of St. Mary Parish, built in 1927, is at 400 Oconto Ave. It is open until Oct. 8. The nearby cemetery contains the graves of many of the fire’s victims, some with their stories engraved on monuments.

Corrie Campbell, communications director at the National Shrine of Our Lady of Good Help, contributed to this story.