‘I think we can all be saints,’ says seventh grader, whose passion is studying saints 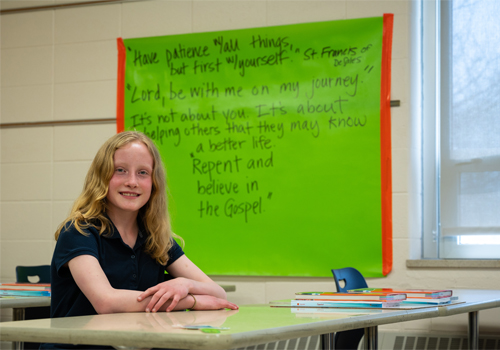 ALLOUEZ — When asked to identify a favorite saint as part of her “Your Catholic Neighbor” profile, Monika Stoik was stumped. It wasn’t because the 12-year-old could not think of a saint. Instead, she had a difficult time narrowing it down to one.

Stoik, a seventh grader at Father Allouez Catholic School, Resurrection campus, has a fondness for the saints, one that is unrivaled by most Catholics, not to mention middle schoolers.

“It’s really hard” to choose a favorite saint, Stoik told The Compass. “I mean there are so many I like. I especially like the five saints who were canonized at the same time: St. Teresa of Avila, St. Francis Xavier, St. Ignatius, St. Philip and St. Isadore the Farmer.

“But I have to say my favorite one is probably St. Therese of Liseux,” Stoik said, nodding her head.

Stoik is a member of St. Francis Xavier Cathedral, along with her parents, Vaida and Chris, twin brother, Gabriel, and younger brother, Dominik. Her interest in Catholic saints led Stoik to offer brief presentations to classmates when she was in sixth grade.

“Last year, in Spanish class, Monika asked if she could start off by telling the class about the saint of the day,” said her Spanish teacher, Jackie Crown. Her description of Our Lady of Guadaupe began a “saint of the day” presentation that continues today.

“Monika had a notebook she used to write down everything she learned about the next day’s saint,” said Crown. “At the end of the semester, Monika created a Google Slide presentation about Mary and the rosary. She not only presented it to our class, but I asked her to come in and share it with other classes as well — even the eighth graders.”

The rosary presentation “was about, first off, how the rosary was given to St. Dominic, also one of my favorite saints,” Stoik said. She also shared how praying the rosary has changed over the years, such as the luminous mysteries being added by St. John Paul II, “and miracles that have been associated with it — and the symbolism, like how it’s the ‘spiritual sword.’”

Stoik said her parents are happy with her interest in the saints. “My mom thinks that it’s nice that I talk about it,” she said. “My dad just joined the church last year.”

In preparation for his initiation into the church at the Easter Vigil in 2020, Stoik said her father asked her to help him choose a saint for his confirmation name. “So I kind of chose some that related to what he does for work, then my mom really wanted him to choose Thomas Aquinas,” she added.

Stoik said she also prays to some of her favorite saints.

“I say a prayer to St. Therese quite a bit. I also say one to Dominic,” she said. “I usually say one to the saint whose feast day it is and then any other saints I can relate to during that day.”

She said St. Therese holds a special place in her heart because of Therese’s focus on the little things.

“I like how she decided, she knew she couldn’t do a lot, so she decided to do little things, and she thought that would be good,” said Stoik. “Her devotions were also pretty neat, like how she liked the Child Jesus a lot.”

Comparing the saints’ lives and finding out what they had in common is also a fun activity for Stoik.

“Like St. Gabriel of Our Lady of Sorrows has almost the same life as St. Therese,” she said. (He also focused on doing little things for God and died of tuberculosis.) “Then today’s saint, St. John Baptist de la Salle (April 7) and St. John Bosco have close to the same life. They liked helping young boys learn.” Both were educators and started schools for boys.

Stoik said she’s had the opportunity to visit two places that have had an impact on her faith life: the National Shrine of Our Lady of Good Help in Champion and the Hill of Crosses in Lithuania.

“I think (the shrine in Champion) is a neat place,” she said. “It’s kind of cool that you can be in the same spot where Mary appeared to Adele.”

Her mother is a native of Lithuania, so Stoik has visited that country several times. “There are like a few hundred thousand crosses that people started putting up in World War II,” she said about the Hill of Crosses. “It’s a nice place to reflect.”

Asked why people should have an interest or devotion to saints, Stoik said the world needs role models.

An avid basketball and soccer player, Stoik plans to attend Notre Dame Academy. Beyond that, she does not know where life will lead her. She does know that her love for the saints will continue.

“I think that I can learn how to put their ways into my life and that can also help me grow in faith and then I could reflect that to others,” she added.

“Just to think of the effect it’s having on others,” said Crown. “She is getting other kids to reflect, and who have maybe gone home to share with somebody else. So the trickle effect of what she is doing is beautiful.”

Words to live by: “We are called to be saints.”