We’ve all seen them — especially during the Easter season — but we may not know what to call them. They are the holy water sprinkler and its bucket/bowl.

The official bucket that holds holy water for sprinkling at Mass is called an aspersorium (or sometimes a “situla”). It comes from a Latin verb, aspergere, which means “to wash or sprinkle.”

The same verb gives us the word for the holy water sprinkler itself: aspergill or aspergillum. 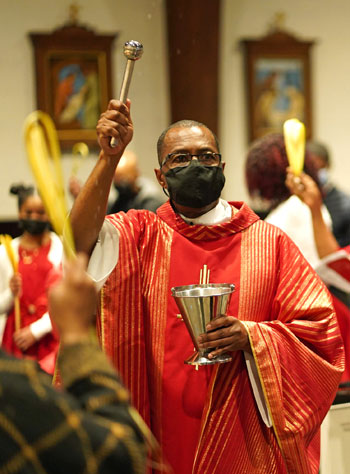 Fr. Rony Fabien, pastor of St. Martha Church in Uniondale, N.Y., uses holy water to bless parishioners and their palm fronds during a Mass on Palm Sunday, March 28, 2021. The use of holy water for sacred rituals predates Christianity. The sprinkling rite is a common Catholic Church practice during the Easter season. (CNS photo | Gregory A. Shemitz)

Some churches will also use evergreen branches for sprinkling holy water. This is because it is a reminder of Psalm 51: “Cleanse me with hyssop, that I may be pure; wash me, and I will be whiter than snow” (v. 9).

While holy water may still be in shorter supply this year — given the ongoing COVID-19 precautions — there was holy water at Easter. And, according to the diocesan office of divine worship, the sprinkling rite is permitted within the current pandemic guidelines. (However, the pandemic also means that the holy water fonts are not to be generally available because of the risk of spreading the virus. Bottles of holy water can be distributed.)

The use of holy water predates the Christian era and comes to us from Jewish rituals of purification. Jesus and his followers would have followed these same rituals (Lk 11:37-41). The act of washing was an important part of daily Hebrew life and there was much ceremony attached to washing when taking part in Jewish religious rituals. Priests at the Temple purified themselves before and after offering sacrifice. Anyone approaching the Temple sanctuary had to wash and there were many containers of water in the Temple for this purpose. The biblical account of the Wedding at Cana mentions six stone jars filled with water for ceremonial washing (Jn 2:6).

Early Christians incorporated this use of water into their ceremonies as well, first for baptisms, of course, and then in home churches. Finally, once the first basilicas of the fourth century were consecrated, the atria of these buildings were often the site of holy water fonts. These were often large and freestanding. Sometimes the fonts even incorporated “living water,” that flowed from a stream or fountain. (This gave us the word “font.”)

The Catholic Encyclopedia notes that, in the sixth century, the great Byzantine church of Hagia Sophia (“Holy Wisdom”) in Constantinople (now Istanbul, Turkey) had a flowing fountain. (The Hagia Sophia was converted into a mosque last July.)

In the Extraordinary Form of the Mass (the “Latin Mass”), each High Mass would begin with the asperges rite and the words of Psalm 51: “Asperges me, Domine, hyssopo et mundabor, … ” (“Wash me, Lord, with hyssop and I shall be cleansed. …”)

This asperges rite can be used during the Easter season in the Ordinary Form of the Liturgy as well, though the tradition is to not use the words of Psalm 51 and substitute those from Ez 47:1, during the Easter season. This sprinkling rite is called the Vidi Aquam and starts: “Vidi aquam egredientem de templo, a latere dextro, alleluia … ” which means “I saw water flowing from the right side of the temple, alleluia…” It is a veiled reference to the pierced side of Jesus.

In most churches, however, it is more common to use a simpler sprinkling rite.

During the Easter season sprinkling is often part of the penitential rite of the Mass. When the holy water falls upon us, we make the sign of the cross.

Holy water is one of the most widely used sacramentals in the church.

A sacrament is an object or ritual through which we directly receive the grace of God that flows from Christ’s Paschal mystery. That means that all sacraments find their origin in Christ.

A sacramental — like a blessed rosary or making the Sign of the Cross — is different from a sacrament. Sacraments were instituted by Christ; sacramentals were not. However, sacramentals often have some link to one of the sacraments and serve as reminders of those sacraments. Holy water specifically reminds us of baptism, which was celebrated at the Easter Vigil. At that Mass, we repeated our baptismal promises to remind us that we were cleansed of original sin at our own baptisms.

Each time we are blessed with holy water, it is a reminder of God’s love for each one of us and a reminder of our baptismal promises.