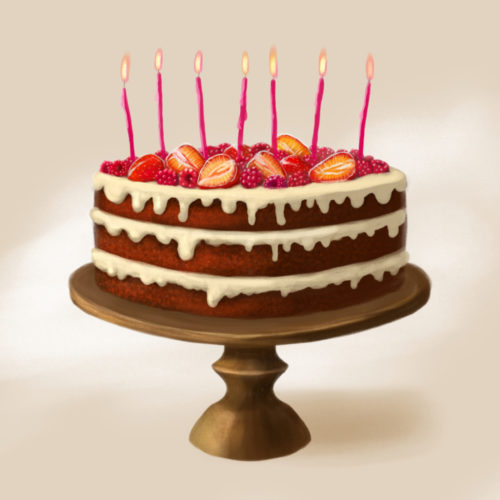 One of the newer traditions tied to Pentecost is strawberry cake, since strawberries ripen in early summer. The seven red candles represent the seven gifts of the Spirit, and the red strawberries look like red flames.

We all enjoy birthdays — presents, parties, good wishes, songs and even flowers.

In some sense, Pentecost can be considered the birthday celebration of the church, because it is the day that the church became fully visible and active in the world. While the church was born on Good Friday, flowing forth from the Lord’s pierced side as he hung on the cross, the appearance of the Holy Spirit 50 days later made it all perfectly clear and really set things in motion. Literally.

“And suddenly there came from the sky a noise like a strong driving wind, and it filled the entire house in which they were. Then there appeared to them tongues as of fire, which parted and came to rest on each one of them. And they were all filled with the holy Spirit and began to speak in different tongues, as the Spirit enabled them to proclaim. … But others said, scoffing, “‘They have had too much new wine’” (Acts 2: 2-13).

Easter all over again

There you have it: all the elements of a celebration: noise and surprises, excitement and people so worked up and eager to talk about it that others accuse them of being drunk. Yet, as Peter pointed out two verses later, it was only nine in the morning, too early for party intoxication. No, it was Easter morning all over again — new life and energy bursting into the world.

That’s part of why Pentecost is called “Pascua Rossa” in countries like Italy. It means “Red Easter.” In other countries, like Sicily, Pentecost is “Pascha Rosatum,” meaning “Rose Easter.” The names come from the red color of Pentecost.

Red is the color of Pentecost. Vestments, altar cloths and even church banners for Pentecost are all red in the Western church. This color symbolizes the fire of the Spirit, appearing as it did in “tongues as of flames” upon each of the disciples (Acts 2:3-4).

These tongues of fire appear symbolically in many church customs. For example, in Italy and Sicily, rose petals (remember Pascha Rosatum?) drop from the ceilings of some churches on Pentecost Sunday, to symbolize flames. And more and more parishes encourage those attending Mass on Pentecost to wear red. Also, just like many birthday parties, people dress up.

And they don’t wear just red — at least not everywhere. While red is dominant, white is also a color of Pentecost. Since the early days of the church, Pentecost has been called “White Sunday,” which later became known as “Whitsunday.”

In the early church, the newly baptized received white garments to wear at the Easter Vigil, when they were baptized and confirmed. They wore these white robes to every liturgical service during the Octave of Easter, symbolizing their newness in the Spirit. After the 50 days of Easter had passed and the feast of Pentecost arrived, the neophytes again put on their white robes. That gave us the name Whitsunday. This is also why, at some Pentecost Masses even today, those who received their first Communion during the Easter season wear their white outfits to church again.

In many Eastern rite churches — such as in Russia and Ukraine — the color of vestments for Pentecost is green. Churches and homes are also decorated with leafy branches. In Poland, decorating homes with greenery is part of the festivities for “Green Holiday” (the feast of Pentecost). The green link seems to date to the early days of missionary work in the Slavic countries, with spring blessings of the crops to be planted.

Music is another tradition of Pentecost. For centuries, at the top of Pentecost’s song list, has been “Veni Creator Spiritus” (“Come, Holy Spirit, Creator”).

Composed in ninth century France, there are about five dozen English-translated versions of this hymn. The first line in Latin is: “Veni, Creator Spiritus.” St. John Paul II, in a Holy Thursday letter to priests in 1998, translated the first stanza as: “Come, O Creator Spirit, visit our minds. Fill with your grace the hearts you have created.”

There are more recent hymns, such as “Rain Down” by Jaime Cortez, or even the 19th-century hymn, “Blessed Assurance,” that speak of the Spirit as well.

And besides hymns, a French tradition was to blow trumpets during the Mass to symbolize the rushing wind that accompanied the tongues of fire.

Plenty of gifts and fruit

With any celebration party, there are gifts. And the Holy Spirit brings them to Pentecost. There are seven traditional gifts of the Spirit. Six are found in the Book of Isaiah (Is 11:2-3): wisdom, understanding, counsel, fortitude, knowledge and fear of the Lord (also called reverence). To these six, later Bible translations (in both Greek and Latin) add “piety.”

Songs, music, decorations and, yes, food. While there aren’t any traditional church foods for Pentecost, that doesn’t mean people don’t celebrate. In medieval England, dances and cheese-rolling contests took place on Pentecost, as did the drinking of “Whitsun ale” at local parishes as fundraisers. Some of the ale was made at local monasteries.

Today, a newer practice among some Catholics is the strawberry cake, adorned with red strawberries, white frosting and usually with 12 red candles. Twelve candles represent the 12 fruits of the Spirit: charity, joy, peace, patience, kindness, goodness, generosity, gentleness, faithfulness, modesty, self-control and chastity. (Seven candles stand for the seven gifts of the Spirit.)

So no matter how you choose to celebrate Pentecost, remember this is a celebration of new and renewed life. Let’s party!