The call to the priesthood developed over time for Fr. Lexa. 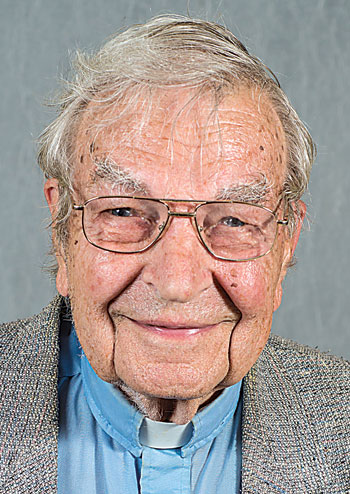 “I was what they call a ‘late vocation,’” he said in a 2020 interview with The Compass for his 50-year anniversary.

Fr. Lexa was born in Milwaukee to Otto J. and Eugenia (Downey) Lexa. He attended Marquette University and Spencerian Business College, both in Milwaukee, and worked in sales for several years.

“I started out with Fuller Brush,” he explained. “I joined West Bend Aluminum. I sold cookware for years.”

When he decided to discern the call to religious life, Fr. Lexa said he sought out “what was available for late vocations.”

Fr. Lexa was ordained to the priesthood at age 43 for Friars Minor Capuchin, St. Joseph Province, by Bishop Leo Brust on Sept. 3, 1970, at Mount Calvary.

He first served in the Diocese of Green Bay when he assisted at St. Joseph Parish, Appleton, in the early 1970s, and from 1972 to 1976, when he ministered at Monte Alverno Retreat House in Appleton. Fr. Lexa served in the Family Life Office for the diocese from 1977 to 1987. He then served two years at St. John Nepomucene Parish, Little Chute, prior to assisting at St. Margaret Mary Parish, Milwaukee.

The funeral Mass is scheduled for Thursday, May 6, at St. Mary Church in Appleton with Bishop David Ricken as celebrant. Burial will follow in St. Mary Cemetery in Appleton.