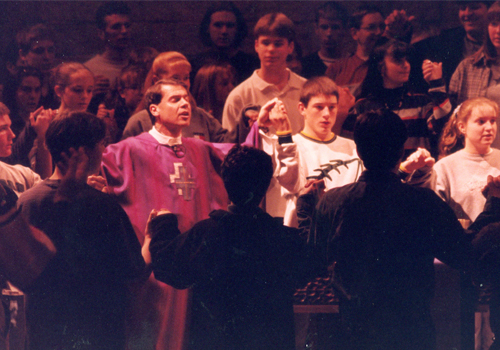 As pastor of St. Raphael the Archangel Parish in Oshkosh, Fr. Daniel Felton oversaw many successful young ministry initiatives, including the Life Teen ministry program, which included liturgies for youth. (Photo Courtesy of Diocesan Archives | Special To The Compass)

ALLOUEZ — Joel Stepanek was excited to find out that Bishop Dan Felton was appointed to the Diocese of Duluth, Minn., even though it took his close friend and mentor a few minutes to share the news with him.

“It wasn’t the first thing he said to me when he called,” said Stepanek, who lives in Phoenix with his wife, Colleen, and two children, Elijah Daniel, 6, and Sophia Grace, 5. “We talk often. He was sort of catching up and then, five minutes into the conversation, he said, ‘I’m going up to Duluth for this press conference thing and I will be a bishop.’”

Stepanek has known Bishop Felton for nearly his entire life. In fact, his earliest memory of the church and priesthood is “Fr. Dan” preaching at the old St. Raphael the Archangel Church on West Ninth Avenue in Oshkosh.

“I remember him coming into my first Communion class and explaining how we were going to receive the body and blood of Christ,” said Stepanek, “reminding all of us second graders that nobody was going to get sick.”

Stepanek has fond memories of when he was an altar server and talking with Bishop Felton in the sacristy prior to Mass. Stepanek was also involved in Lifeteen at the parish, a ministry designed to lead high school youth closer to Christ.

Following college, Stepanek reunited with Bishop Felton in Manitowoc when he served in youth ministry for five-plus years at St. Francis of Assisi Parish. In 2012, Stepanek accepted his current position in the parish services division with Lifeteen.

“We talk every other week on Monday morning for at least an hour,” said Stepanek. “I bounce ideas off him. I get his take on things. He’s very wise. I would not be where I am without that relationship in my life.”

In addition to the sacraments during his youth, Bishop Felton presided at Stepanek’s wedding and baptized both of his children. Stepanek was thankful for the opportunity to attend the ordination and installation on May 20 to “be a part of a big moment in (Bishop Felton’s) life.”

“I’m happy to celebrate what the Lord has done through him and what God will continue to do through him as the bishop of Duluth,” he said. “The Holy Spirit has done well in this moment.

“I’m really excited for the church that Fr. Dan is going to be in that position,” he said. “It’s a difficult balance to find people who have a spiritual depth, the heart of a pastor and an organizational mind, all in one person. That is what is so rare about him and what makes him such a great fit as a bishop.”

Sr. Pam Biehl, a Franciscan Sister of Christian Charity, first met Bishop Felton when he was associate pastor at Holy Innocents Parish in Manitowoc in the 1980s. She served in campus ministry at the time, which included scheduling the school Masses. Bishop Felton was in the priest rotation for the liturgies.

When he moved on to Oshkosh, Bishop Felton contacted Sr. Pam in hopes of her joining the St. Raphael Parish staff. She was completing graduate work in liturgy at the University of Notre Dame at the time. Sr. Pam eventually became director of liturgy and ritual at St. Raphael.

“One of my first jobs was to have a ritual to move from one church to the other (the church is now on Westhaven Drive),” she said. “One Sunday, we gathered and walked across the parking lot into our new church.”

The parish experienced immense growth coinciding with the increased population on the west side of Oshkosh.

“(Bishop Felton) knew how to build a parish,” said Sr. Pam, now pastoral leader at St. Mary Parish, Omro, and St. Mary Parish, Winneconne. “He is really a visionary. He really had a vision. I never saw myself as a visionary. I always said to him, ‘You think of the vision. I’ll make it happen because that’s where my gifts are.’ The only problem with Fr. Dan is he never stops. That’s how he operated, one creative thing after another.”

She admires his gifts as a homilist and can’t recall many liturgies when he used notes..

Although, she does remember questioning him one Sunday.

Bishop Felton’s compassion and care in times of crisis stand out the most about him, said Sr. Pam.

“When there was a death, a suicide, a car accident, when there was a young man who died in Afghanistan, he was there with that family at any hour of the day,” she said. “He sat with them for hours at a time. He always went above and beyond when people were in crisis, first of all to be present and then (with) words that brought peace and calm. I learned a lot from him about how to care for people.”

Bishop Felton has served as a resource for Sr. Pam in her ministry as a pastoral leader. She said that, when she needed advice, he “would be my first call.”

She is thankful for the 11 years they worked together.

“I feel blessed. I know a lot of things I do in my parish I learned from him. He is always there for me,” Sr. Pam said. “I’m excited for him. I know he will work tirelessly for the people of God. That’s what he does. I will miss him, his presence in our diocese.”

“He had an ability to be present in the community in a way that was natural and organic, while proclaiming the Gospel at the same time,” said Mitchell, who now lives in Milwaukee. “He is such a good homilist, but I think some of the most profound things that happened, at least in my ministry with him, was that ability not to just bring people into the church, but to inspire the people in the church to proclaim the Gospel. People wanted to return every Sunday and be a part of the life and the vibrancy of the community.”

A PRESENCE IN THE COMMUNITY

Bishop Felton’s presence in the community outside the parish was “life-giving and life-affirming to young people,” said Mitchell.

“To be present at the gym, athletics, the arts and, by the way, he was the pastor of this large church, that really is the Gospel,” he said. “God extends the church beyond the walls. (Bishop Felton) constantly did that.”

Bishop Felton was the celebrant at Mitchell’s wedding to his wife, Kerry, in 1995. But they first really got to know each other during a men’s group trip to a hockey game in Milwaukee the following year. Mitchell was a music major at Lawrence University in Appleton at the time.

“He said that he was looking at a new program for high school faith formation that would likely have a significant music component involved,” recalled Mitchell. “In interviewing for the music position, he discovered that I had more than a recreational interest in theology.”

Mitchell led Lifeteen at the parish exclusively for five years. He and Bishop Felton then worked together to form InterGen, a nonprofit designed to explore the relationship between church and culture. It was set up as a five-year project.

When Bishop Felton became pastor in Manitowoc in 2005, Mitchell coordinated young adult ministry and RCIA (Rite of Christian Initiation of Adults) at St. Francis of Assisi Parish for two to three years. They eventually served in ministry together for more than 12 years.

Mitchell is now president of InterGen Web Solutions. He retained the brand name of the nonprofit for the business.

“As a web development firm, we are motivated by the same core values of who God called us to be in the world,” he said. “We just position that differently for our corporate company.”

Bishop Felton baptized Mitchell’s children and his second oldest is named for him. Mitchell said that he will do anything he can to support his good friend in Duluth. He anticipates that Bishop Felton will inspire the people of his new diocese to be involved in ministry.

“He’s so good at identifying the gifts of the people around him and providing them a platform to use those gifts in service to the church,” he said.

“I’m happy for Duluth, but I’m most happy that he gets to help shape what church looks like going forward,” said Mitchell.

“People sense that energy. I sensed that right off the get-go. It’s really a good thing,” said Deacon Beehner. “He worked with Fr. Leo Schmitt at Holy Innocents. Fr. Leo was very laid back, but Fr. Dan said that he learned a lot from him.”

Deacon Beehner was ordained to the diaconate in 2002. Bishop Felton served as his homiletics tutor.

“One of the coolest things he would say is, ‘If you can tell a story, you don’t have to explain it,’” said Deacon Beehner. “If you listen to his homilies, he has one point, but he brings it home every time.”

In March of 2005, Bishop Felton was appointed administrator of St. Paul Parish, Manitowoc. Deacon Beehner said that parish members were aware that he was there to bring the six parishes in Manitowoc together to form St. Francis of Assisi in the summer of 2005.

“It really helped having someone as strong a leader as he was,” said Deacon Beehner, who served as director of administration at St. Francis of Assisi. “He would bring everybody together to talk and say what was on his mind. At one of the early meetings, he said, ‘I’m going to tell you everything I know.’ You may say, ‘Is that all you know?’ I will say, ‘Yes, that’s all I know.’

“That frank honesty of not having everything solved was a good thing. He put groups together and said, ‘I want you to do this.’ He would let others steer,” he added. “Spiritually, we are supposed to let go and let God. Not a lot of us have that trust that he did.”

Bishop Felton endured the anger of those upset that their churches were closed in Manitowoc for the formation of the new parish. He was very fair, said Deacon Beehner.

“Not one site, as we called them, was favored over the others,” he said. “That’s why we ended up leasing an office building in the middle of town so we weren’t favoring one of the three sites.”

Deacon Beehner views Bishop Felton as a “great fit” for the Diocese of Duluth. His energy will continue to serve him well, he said.

“His inner energy is spiritual, and it’s also an energy that’s very real down to the heart,” said Deacon Beehner. “I think the people there will feel it. It’s real.”

Bishop-elect Dan Felton will be installed and ordained as bishop of the Diocese of Duluth on Thursday, May 20 at 11:00 am. Vespers will be held on Wednesday evening at 5 pm. A livestream of the vespers and the Ordination Mass can be found at www.gbdioc.org/duluthordination.