Penitential rite offers an ancient prayer from the early church 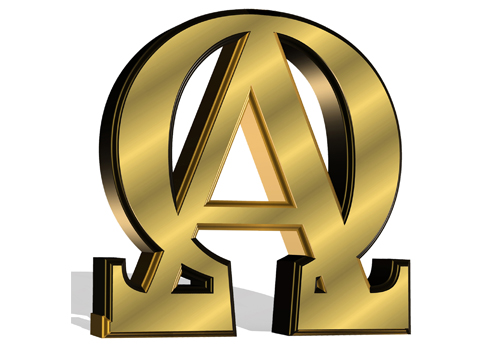 The Greek letters Alpha and Omega are the first and last of the Greek alphabet. In the Book of Revelation, Jesus refer to himself as “the Alpha and the Omega” (Rev 22:13). This is often translated as “the first and the last.” (Bigstockphoto.com)

The Mass is peppered with words from various languages. For example, “Amen” comes from the Hebrew word for “truth.” However, the use in Hebrew has a stronger meaning, almost like taking an oath attesting to the truth of something.

Likewise, we have Latin words — such as “creed,” which comes from the Latin “credo” for “believe.” Incarnate comes from incarnare, a Latin verb meaning “to make flesh.”

However, one prayer comes to us in its original Greek form at some Masses, especially during Lent: the “Lord, have mercy,” or “Kyrie eleison.”

The Mass, as we know, was celebrated in Latin for a very long time — and still is in the Extraordinary Form of the Mass. This is because this form of Latin — better called “ecclesial Latin” (church Latin) — was one of the reasons that the language of Rome survived as the empire of Rome disintegrated in the fifth century.

However, Jesus and his disciples spoke Aramaic (a Semitic language, as is Hebrew). Jesus would have known Hebrew and Greek, probably Koine Greek, which was the common day Greek language of workers in the Roman Empire of the Middle East at that time.

Even though Latin has a long history in liturgical celebrations, the use of Greek goes back farther. The Greeks ruled the world before the Romans. Greek was the language of the first written translation of the Hebrew Bible, called the Septuagint, which was in existence at the time of Jesus. Greek was also the language of commerce at that time and is the language in which the New Testament was first written. So, when we use Greek words in the Mass, we’re going pretty far back in our liturgical roots.

When the Gospels were written down later in the first century, they gave us many of the words that we now regularly use for church matters:

Kyrie eleison comes from two Greek words: “Kyrios” meaning “one who has authority” or “Lord;” and eleos, which roughly translates as “mercy.” However, the original word eleos is a Greek word for the Hebrew, hesed, which is hard to translate because it covers so much about God and God’s mercy. It generally refers to the loving faithfulness that God has shown to his people throughout all Jewish history, reminding us that God has always cared for his own.

The Kyrie came into our liturgy from the Eastern Church and was recited at Jerusalem as early as the fourth century. It began as a litany — a series of praises, invocations and supplications — and is still called “the Minor Litany” in some Eastern Christian rites.

Like the Hebrew word hesed, Kyrie eleison has layers of meaning. Since the church in the East has used it the longest, it can give us a good explanation. The book “Orthodox Worship” can help:

“The word ‘mercy’ in English is the translation of the Greek word eleos. This word has the same ultimate root as the old Greek word for oil, or more precisely, olive oil; a substance which was used extensively as a soothing agent for bruises and minor wounds. … The Greek words for ‘Lord, have mercy,’ are ‘Kyrie, eleison,’ that is to say, ‘Lord, soothe me, comfort me, take away my pain, show me your steadfast love.’ …  It is in this sense that we pray ‘Lord, have mercy,’ with great frequency throughout the Divine Liturgy.” (“Divine Liturgy” is what the churches in the East call “the Mass.”)

It may be Greek to us, but it speaks to us at a deep level, calling on the Lord in both praise and intercession.

So the next time you pray, “Lord, have mercy,” remember what you’re really saying: that you believe in God’s mercy revealed in Christ, a mercy that has endured since the beginning of Jewish history through the time of the first disciples to this very Mass you are now attending.