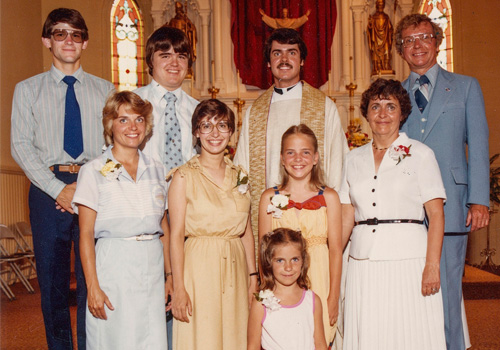 ALLOUEZ — Some traits run in the family.

At least that’s what Bishop Dan Felton’s four sisters each said when they were asked about their brother and his new assignment as 10th bishop of Duluth, Minn. They believe their brother inherited many of his strengths from their father.

When his sister, Therese Rilling, heard the news, she dug out their old Appleton West High School yearbooks — she is one year younger — and looked at all his awards: captain of the track team, Craftsmanship Award, Elks Leadership Award, Wisconsin Honor Scholarship, Outstanding Teenager of Wisconsin, National Honor Society, Badger Boy State.

“After I finished reading through the awards,” Therese said, “I realized how much my brother mirrored our father, Ken. Dad passed away last May and we spent time going through his past, and he was track captain, sprinter, mile relay, National Honor Society, Badger Boy State and many more leadership qualities.

“In our father’s eulogy, Dan talked about Dad being a natural born servant,” she continued. “Throughout my dad’s life, he was able to communicate with others to make others know that he cared, listened to their thoughts and would give them meaningful advice. Dan showcased these skills early on. Our mother tells the story when he was young, his classmates called him ‘Perry.’ … They said he acted like Perry Mason, a famous attorney on a TV show in the ‘60s!”

It has been a challenging year for the Felton family. Besides their father, they lost Ken’s brother, Jim, and an aunt, Bernice Rudolph. They also had to sell their parents’ home of 60 years because their mother, Carol, has moved into assisted living.

Therese called it “a sad year,” but added that, “through all of this, we worked as a team. …Dan was always checking in on how we were feeling. With Dan moving to Duluth, we will miss the short distance we have had to gather to support each other. But our family will figure out a way to stay connected.”

Things changed for the Felton family on Palm Sunday weekend, when the papal nuncio, Cardinal Christophe Pierre, called Bishop Felton about his appointment to the see of Duluth. As soon as he could tell his family, Bishop Felton called each of his sisters individually. They said that, in true form, he was very calm about the news.

His youngest sister, Peggy Vaubel, said he told her “rather nonchalantly, in a conversation at 9:15 at night. Honestly, that is how he is. Nothing is ever about him. It’s about serving others and God. He takes his opportunities and looks at them as adventures.”

He may have learned that from his grandparents, John and Pearl Felton, who in 1945 started a glass business in Appleton. Bishop Felton wears his grandfather’s ring and even included a square notch glass cutting tool in his bishop’s crest.

His sister, Mary Mentele, had a reaction many people might understand. “When Dan called to tell me, my first thought was a selfish one,” she said. “I felt it was too far away. We are a close-knit family. We gather for Friday night fish fries, church picnics, concerts, birthdays and even own a family summer cottage together. Even five hours (the driving distance between Green Bay and Duluth) is too far, but Dan reassured me that it will all work out. Always the big brother!”

However, none of the sisters was surprised by the appointment. Their mother later reminded her daughter, Jenny Bonikowske, that “Dan came home one day from fifth grade and said he was going to be a priest. He never wanted to be anything else.”

Each of the older sisters remembers “playing church” as children, and Therese still laughs about “who got to give the communion.”

Mary agreed. “As a child, I remember we took the old chicken coop and made it into our church. We wrote our own prayer books and had communion with candy wafers. I have never met too many people in my lifetime who played church!”

Youngest sister, Peggy Vaubel, was born when Bishop Felton was in college. “My memories of Dan,” she said, “were his letters he sent while he was studying abroad. My parents would show me on the globe all of the places he was around the world. I also got the best presents from him, like my name in Hebrew on a necklace.”

They have all supported their brother in his vocation. “Dan always talked about his passion/calling of becoming a priest,” Therese said. “Our family has followed his journey through his different assignments — from visiting him in New York to dancing a polka with him at his church picnics. He has also taken time to join our journeys, taking some of us to college, marrying all of us and he has attended the many family celebrations. If we were fortunate, he brought out his humstrum (stumpf fiddle) and played along as we sang.”

There are many family stories everyone laughs about. But, as Jenny said, “In the end, he is still our brother and we love him and support him wherever his life leads him. We are with him all the way.”

As they prepare to help him move to Duluth, the sisters are adjusting to the idea of their brother as a bishop.

“Get ready Duluth because Dan has possessed the capability to forge new friendships and respect at every stop along the way,” Therese advised. “His gift of storytelling with the help of the Holy Spirit will be woven throughout the diocese at the many ceremonies he will execute as the bishop of Duluth.”

The Felton family has been used to gathering for an annual “sibling weekend” which started about 10 years ago.

“I enjoy that time together as I hear stories of when they were growing up,” said Peggy, who is 20 years younger than Bishop Felton. “Mom and Dad were the young parents for them and the oldest parents for me. We pick a new location and always have a good time.”

Therese said that the next sibling weekend’s location is already selected: Duluth.

“Now, as I am older, I see how he is like our late father,” Peggy continued. “Dan listens to your concerns and weighs all options before he makes a decision. He is patient and understanding. He presents unconditional love to all the people he encounters. He acknowledges you when you walk in a room and engages in the activities before him with no complaints. … Now, I truly look at him as my living father figure and proudly call him, ‘My brother, the Father.’”

Bishop-elect Dan Felton will be installed and ordained as bishop of the Diocese of Duluth on Thursday, May 20 at 11:00 am. Vespers will be held on Wednesday evening at 5 pm. A livestream of the vespers and the Ordination Mass can be found at www.gbdioc.org/duluthordination.