Patty Volp says faith in God has helped her through tragedies 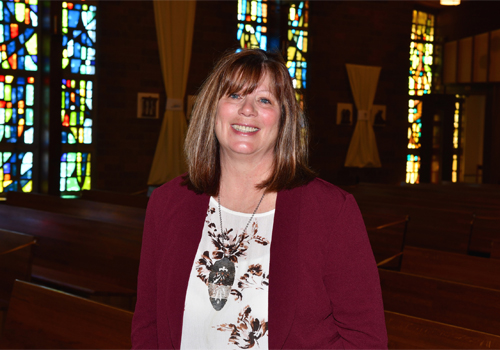 Your Catholic Neighbor: Patty Volp (Dawn Blake | For The Compass)

WINNECONNE — Trust in God and the faith community at St. Mary’s in Winneconne have seen Patty Volp through challenging times in her life, and she’s on a mission to give back.

Growing up in Princeton, the youngest of six children in a strong Irish-Catholic family, Volp was shaped by her mother’s steadfast faith and involvement in church.

“It’s those roots that she set for me that really defined where I would go and what I would do,” she said. “It was tested, as many people have probably been tested — mine was, my mother’s was. But I saw her experience some stormy weather in her life and she just came out with even more faith and trust in God.”

Volp’s sister, Connie, a single mom, was killed in a car accident at the age of 29. Their parents raised her 9-year-old son. She remembers her mother saying that she prayed to God to give her the grace to be strong and not cry at the funeral.

“And she didn’t,” said Volp. “It’s experiences like that that really help me understand how important faith in God is. It lifted her up at some pretty weak moments. And it has for me, too.”

“When I was a kid, before my sister died, growing up in this amazing strong family, I thought the worst thing that could happen is if I would lose a sibling, or a parent,” she said. “But those things happened, and I realized that wasn’t the worst thing. The worst thing would be to experience those things without that faith in God, that foundation, to carry you through.”

Prior to her sister’s passing, her oldest brother, Gordy, was 29 when he was involved in a tragic farming accident that resulted in partial loss of all four of his limbs.

“I remember my brother laying there in the hospital bed after surgery and saying to Dad, ‘Someday I’m going to shake your hand.’ And he did,” Volp said. “He had four prosthetic limbs, he lived for 30 years more after that accident, he started his own company.”

“My life has been so full of grace because of all the people who have been in it that just shine. It didn’t end with my own personal family, it continued at St. Mary’s,” she said. “The people there have supported me through more storms after those. Without that faith community, I think I’d be lost.”

Volp is paying it forward through her involvement and outreach at St. Mary’s, where she’s been a member since 1988. She is a lector and extraordinary minister of holy Communion, in addition to serving on the Stewardship Committee. The committee encourages people to be more aware of being good stewards of prayer and service through motivation, by example and by providing opportunities for them to share what they can with others.

While on the Parish Mission Planning Committee, Volp devised “Rock the Village” as a way to further connect with the community. Starting small by helping out parishioners who needed some spring and/or fall cleanup, the St. Mary’s Winneconne initiative has grown exponentially in the two years since its inception. With assistance from Rose Unser, pastoral associate of St. Mary Churches Omro and Winneconne, and Laura Broderick, who is part of the Village of Winneconne Beautification Committee, Rock the Village has expanded to projects in the village as well as other churches.

The fourth session was April 24 and included sprucing up buildings and flowerbeds at the Winneconne Historical Society Museum Complex, cleanup of the St. Thomas Catholic Church Cemetery in Poygan, and yard work at a parishioner’s home.

“This was the largest turnout we’ve had — 45 at last count,” said Volp. “Volunteers included members of White Cedars 4-H Club, which was awesome.”

Volp’s vision for Rock the Village includes working alongside parish members from other churches in the community on a big project. “I don’t know what that is for sure,” she said. “But I just feel like we could share the love of Jesus standing next to each other, doing good and sharing and that faith in God, and being good stewards of what was given to us. You plant the seed and watch it grow, that’s kind of what we’re doing getting out there.”

The next Rock the Village will be in October, but no specific date has been set.

“Working with other churches in the community — not only Catholic — is really important so that other people can see that we may have differences somewhat, but we can come together for the common good, which is what we all have to start doing more of,” said Volp.