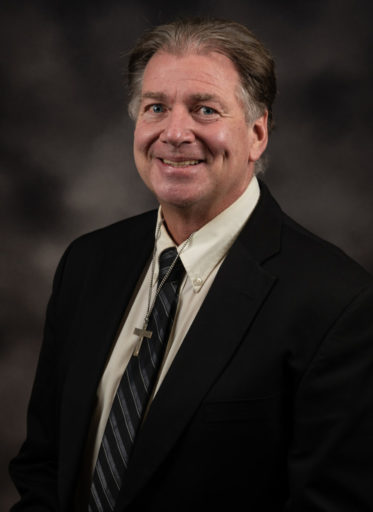 “I just love bringing little ones to the faith,” he said. “I think it’s important to start them off when they’re little and, as a family, you are making a commitment. It’s not just a one-time thing. It involves everyone in the parish. Everyone is involved in raising this child in the faith. That is an amazing process.”

Wallander, 58, is one of seven deacons who will be ordained on May 15 at St. Francis Xavier Cathedral in Green Bay. He and his wife, Diane, live in Manitowoc, where he was born and raised. They are members of St. Francis of Assisi Parish. The couple has six children, ages 10 to 35, four of them still living at home and attending Roncalli Catholic Schools.

A patient financial service specialist with Americollect, Wallander said he first felt the calling to become a deacon 15 years ago. Now that his children are older, he said it has all clicked into place.

Just as Wallander was contemplating making the leap of faith, a fellow parishioner said the church could really use more deacons and told him he’d make a good one. Another friend asked if he’d ever thought about becoming a deacon. A third conversation, with his mother on the phone, was the clincher. She told him her church had a new deacon and said she wanted him to become a deacon before she passed away. He is fulfilling that wish.

Other deacons and priests are his role models, he said.

“The ones that influenced me most are those who are involved in the community and understand what the people around them are living with,” Wallander said. “A deacon’s role is to be the person that takes the needs of the people to the church.”

Fr. Richard Klingeisen, pastor  of both St. Mary Parish in Clarks Mills and St. Michael Parish in Whitelaw, has been his spiritual adviser and mentor.

“He’s the kind of guy (who), when he’s not (serving as a priest), he’ll be helping his brother on the farm, fixing a tractor or helping someone in the community,” Wallander said. “He gets his hands dirty. He’s part of the community. He’s not just a spiritual adviser, but also a friend.”

For Wallander, the Cursillo and CEW (Christian Experience Weekend) retreats have been deeply meaningful. Last year, he served as rector for CEW in Manitowoc.

“The greatest thing about all of these is, no matter where you are in your faith, we all come together in one place and we all journey in faith together,” he said.

For the past five years, he also has been putting his leadership skills to work with the community group NAMI (National Alliance on Mental Illness).

“I have loved ones with special issues,” said Wallander, who, when he couldn’t find the help he needed, started teaching classes for those living with someone with mental illness.

“We’ve been helping so many families. … (The program) gives them coping skills to understand what they are dealing with so they can help their loved ones live a better life,” he said.

In addition to baptisms, Wallander said he’s looking forward to preaching at the church’s three locations. He also may be called upon to bring communion to the sick as well as to witness weddings and preside at funerals.

As he gets ready for his ordination, Wallander is optimistic about his role in the church’s future growth and success.

“Our parish is going through a lot of changes and we are open to so many new ideas on how to include more people into our parish,” Wallander said. “It could be said that we are moving from a parish of Christendom to a parish of apostolic mission.”

The church is asking, “How can we reach other and new people?” he said. “This is something that a lot of parishes are having to face. How do we reach them and how do we get them into the parish?”