At 93, Minnesota senior is oldest to participate in Walk to Mary 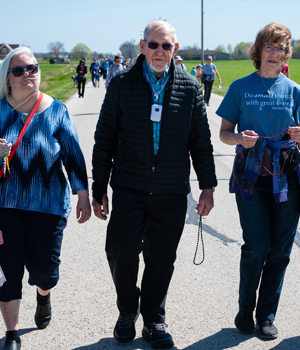 John Sloot and his daughter, Bernadette Quist, right, walk with other Walk to Mary pilgrims along a rural road near Champion May 1, 2021, while praying the Divine Mercy Chaplet.

CHAMPION — John Sloot, 93, a retired farmer from Winthrop, Minn., lives by the adage of his late brother, Vincent, a marathon runner, who preached: “When you get near the end, you have to throw everything out of the closet.”

The adage loses some meaning translated from his native Dutch, but Sloot uses the marathon runner’s expression to describe how he maintains his physical activity. The older he becomes, the more active Sloot seems to have gotten.

According to Walk to Mary organizer Pat Deprey, Sloot was the oldest person to ever participate in the event, held each year (except in 2020) since 2013.

Sloot has maintained a healthy lifestyle throughout his senior years — as well as a sense of humor.

“People ask me, ‘How do you do it?’” Sloot told The Compass before the Walk to Mary. “I say, ‘I will tell you the secret. Just keep on breathing.’”

When he was in his 70s, Sloot said he read in Reader’s Digest about the benefits of jogging. So he decided to  start jogging around the yard of his 385-acre farm. “I did it in the yard because we have some old-fashioned neighbors,” he said. “If I’m walking on the road and jogging, he’d think I’m (crazy).”

But after tracking his progress, he decided to jog in public.

“I was doing up to a mile and I felt pretty good. I said, ‘I’m going to go one mile out on the road and then turn around and come back … and the neighbor can think what he wants,’” he recalled. “I did that day after day.” 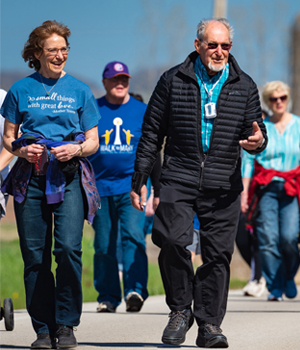 Bernadette Quist of St. Cloud, Minn., left, and her father, John Sloot, 93, a retired farmer from Winthrop, Minn., participate in the eighth Walk to Mary on May 1, 2021. Sloot is an avid walker and, until the COVID-19 pandemic, was a regular ice skater at the New Ulm, Minn., Figure Skating Club.

Sloot said that he jogged two miles every other day for 20 years. “I never in my life felt better,” he said. “I was so healthy and I could jump out of bed, put my shoes on and do my two miles. No problem. Then I had some health problems and backed off.”

In order to remain physically active, Sloot said it’s important to have some motivation. “I figure I want to be fit and healthy because I ride horses and, in the winter, I do ice skating,” he said.

Ice skating is a hobby he acquired growing up in Holland. When he was in his 50s, he heard on the radio that the New Ulm Figure Skating Club was looking for new members. “I called up and said, ‘Do you have any older people in there?’ and, they said, ‘Oh, yes, sure.’ So I went down on Saturday morning and looked around. I didn’t see too many guys my age. But I had skated before, so I could keep up with most of them.”

Sloot performed in community ice skating shows in New Ulm until 2019, when he was 91. Last year’s events were canceled due to COVID-19.

Spiritual health, like physical activity, is important to Sloot, a member of St. Francis de Sales Parish in Winthrop. Growing up in Herwen, Holland, he recalls praying the rosary with his family.

“When World War II started and when it got hot near the end … we were in the cellar every night. We would pray the rosary,” he said.

Sloot immigrated to the United States in 1953 at age 25. He settled in Minnesota Lake to work on the farm of a family who had sponsored his move from Holland. Two years later he returned to Holland and on Feb. 16, 1955, he married his childhood sweetheart, Minnie. Both John and Minnie had brothers who were priests. John’s younger brother, Theo, died when he was 75, and Minnie’s brother, Harry, died at age 31, shortly after his ordination.

The Sloots became U.S. citizens in 1964. “We rented a farm from the sponsor for 11 years and then I said to my wife, ‘Let’s try buying our own farm.’” They purchased two farms on 240 acres in Winthrop and later added 145 more acres, on which they grew mostly corn and soybeans. They also raised hogs.

John and Minnie raised 11 children on their farm, which they sold to their son, Harry, in 1994. “Now I’m a retired farmer, but I still get involved in the farming a little bit,” said Sloot. “I spend more time riding a horse than riding a tractor.”

Minnie passed away in 2015. But 10 years earlier, in 1995, she was awarded the Bishop’s Medal of Service from the Diocese of New Ulm for her years of service to St. Francis de Sales Parish.

In 2017, Bernadette accompanied her father to Holland to celebrate his birthday with relatives.

“It was the start of a pilgrimage to Fatima and then to Lourdes,” she said. “That was a time of reuniting with his devotion to the rosary. We would pray the rosary as a family, especially during Christmastime and during Lent, but then after Mom had passed, he said he would like to do this pilgrimage.”

Sloot has been one of the rosary leaders at St. Francis de Sales Parish and promotes the devotion to Our Lady of Fatima.

Several years ago, Bernadette learned about the Walk to Mary on Relevant Radio. “I thought that would be an interesting thing to do,” she said. “When Dad said he would be interested, we made arrangements.”

As he reached the finish line at the National Shrine of Our Lady of Good Help with his daughter, Sloot said he was sure he could have completed another mile. “But now, we need lunch,” he added.

“A lot of people my age, they walk with walkers and wheels,” Sloot said. “I can still walk and jog a little ways. I don’t think I could beat you, but I can give you a run. Life is fun if you make it that way.”