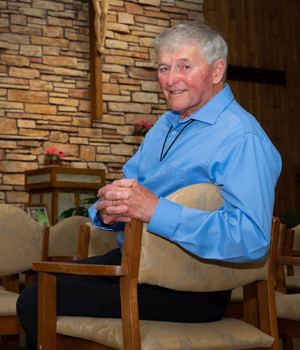 KAUKAUNA — Ken Vande Hey has found his niche assisting residents of St. Paul Elder Services. The senior care facility, sponsored by the Franciscan Sisters of Christian Charity of Manitowoc, offers a continuum of care for seniors, which includes the ministry of presence offered by Vande Hey.

A lifelong resident of Kaukauna, Vande Hey began visiting St. Paul Elder Services when his mother, Anna Jane, moved to the residence. “I wanted to spend time with her, so I volunteered,” he said. “I would be at Mass and she would be at Mass. I would eat dinner with her. So it was a time for us to be together. She died four years ago and I continued because I just love serving here.”

Vande Hey has been a volunteer for more than 10 years, assisting at daily Mass offered for residents and visiting those unable to attend Mass. He helps those needing assistance into the chapel, then lectors or cantors when needed.

“The things I enjoy most are bringing holy Communion to those who aren’t able to get to Mass,” he said. “One of my biggest joys is to pray for those who are dying. I also pray for some of those who are isolated, who can’t get out of their bed. When a person dies, I like praying with them as they go out. It is a gift to watch them head off to heaven.”

The volunteer service that Vande Hey provides is much appreciated by the residents and staff.

“Ken is compassionate, deeply spiritual and brings a depth of the love of God to all he meets each day,” said Sr. Delores Wisnicky, director of mission and spiritual care at St. Paul Elder Services. “He knows the Lord and offers all to God.”

Sr. Delores said that Vande Hey helps her in many roles.

“He made a Jesse tree stump for our chapel during Advent,” she said. “I described what I needed and he made it for us. He has helped with Stations of the Cross, Holy Week services (and) has been a real servant of the Lord to St. Paul Elder Services.”

According to Vande Hey, spending time and praying with residents at St. Paul is an extension of his Catholic faith. He credits his parents for instilling faith and morals in him and his seven siblings.

“We wouldn’t think of missing Mass on holy days or Sundays. Our mother made us go to confession and we prayed the rosary as a family,” he said. “So our faith was important to us.”

Vande Hey delivered fuel products during his career, which included 10 years working with his father in the oil business. In 1966, he married his first wife, Jan, who passed away four years ago. They had five children, Joseph, Becky, Mark, Jim and Tom.

Nearly two years ago, he married his second wife, Carol Ann, whom he met while on a pilgrimage to Catholic sites in Canada. Between them, they have 19 grandchildren.

Vande Hey said he’s had to lean on his faith throughout the years, including the deaths of family members and when he decided to give up drinking alcohol in 1984.

“That was a prayerful time and I believe it was a miracle,” he said. “It was the best thing that ever happened to me. I drank for like 20 years, from when I was 20 until I was 40. It wasn’t that I was a drunk or something, I was just a happy-go-lucky drinker like everybody else.”

He said he chose to give up alcohol to be a better husband and father.

“My children were becoming an age where they would be in high school and … I looked at what kind of a role model I was and (said), ‘I know what I need to do,’” he said.

After that, he said he began to grow even closer to God.

“I made a Cursillo (men’s retreat), and then my wife (Jan) and I took over the religious education program for 18 years at Holy Cross Parish,” he said. “We led youth retreats to Colorado. They were 10-day retreats to the Rocky Mountains. That was a faith-filled experience that is still going on. My son (Jim) is running it.”

These experiences, along with others such as Teens Encounter Christ (TEC), Life in the Spirit seminars and mission trips to the Dominican Republic, brought him to where he is today, said Vande Hey. “It’s my faith journey.”

Today, Vande Hey spends five or six days a week sharing his faith with St. Paul Elder residents, reminding them how they are loved by God.

The COVID-19 pandemic was the only thing to keep him away from volunteering last year. “I was totally left out,” he said, but he continued to pray for residents who were not able to have guests. At the end of 2020, Vande Hey was invited to return as a volunteer.

Vande Hey said volunteering at a senior residence can also be a blessing for others if they are open to it. “If God calls you to move ahead in your faith and he’s nudging you to work in ‘an old folks’ home,’ give it a try, because it’s a wonderful experience,” he said. “It’s kind of like going on a mission trip to Haiti. It’s the greatest thing in the world. … The greatest part of this (service) is to help people understand Jesus in their life and to guide them toward their heavenly journey.”