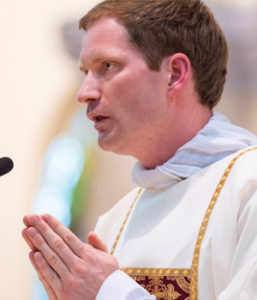 Deacon Patrick Costello, pictured delivering the Gospel reading at the ordination of Deacon Matthew Colle on June 20, will be ordained to the priesthood by Bishop David Ricken on July 3. (Sam Lucero | The Compass)

ALLOUEZ — When Deacon Patrick Costello reflects on his journey to the priesthood, he recognizes that those who have supported and guided him have been sent by God.

“In my life, it seems like the Lord has really worked powerfully through the mediation of other people,” he said. “I’ve heard him through other people. That love that they show, that care that they show, it’s genuine. I know it’s true. It’s from God. That’s been clear the whole time.”

Deacon Costello will be ordained a priest at 10 a.m. Saturday, July 3, at St. Francis Xavier Cathedral in Green Bay. He looks forward to sharing the day with his family and friends. He was ordained a deacon, along with his classmates from the Pontifical North American College, on Oct. 1, 2020, at St. Peter’s Basilica in Rome. Due to COVID-19, guests were not able to attend in person.

“I’m thankful for everyone supporting me online,” he said. “I was absolutely lifted up by the prayers throughout the year, no doubt about it. I experienced the fruit of a lot of prayers.”

Following ordination, Deacon Costello was able to serve as a deacon at the Naval Support Activity (an American base) in Naples, Italy.

“There are many Catholic families there at the base chapel, so we were able to serve as deacons at Mass, preach, teach students the catechism,” he said. “The first half was virtual, but then we were able to go down there in person and be with them.

“The highlight for me was in my last two weeks in Rome, one of the families asked me to baptize their newborn daughter, so I baptized little Charlotte in a church in Rome,” said Deacon Costello. “They came up to Rome from Naples to Chiesa Nuova, the church St. Philip Neri founded. Ben Pribbenow (a seminarian for the Diocese of Green Bay) was my acolyte for it. Both godparents were from big Catholic families, so we had a lot of children running around before the baptism. It was very beautiful. I wasn’t expecting that experience.”

Deacon Costello began studies at the Pontifical North American College in the fall of 2017. He previously attended Mundelein Seminary near Chicago, which he said was a blessing because he was in close proximity to his maternal grandparents, George and Rosemary Sheahan. As a result, he was able to spend time with them on weekends.

“My grandpa had a really big influence in helping me grow in prayer,” said Deacon Costello. “He actually took me on a pilgrimage when I was going into ninth grade to visit Medjugorje, Bosnia. There I had a very profound experience praying the rosary, through eucharistic adoration and confession. That confession gave me the grace to really start growing in a life of discipleship.”

In 2018, 13 years later, Deacon Costello walked into a confessional during a visit to Lourdes, France. He soon recognized that the priest was the same one from his sacrament of reconciliation in Medjugorje.

“At the end of the confession, I had to ask him, ‘Were you in Medjugorje in 2005?’ He replied, ‘At the youth week?’ I told him, ‘I went to confession with you then,’” explained Deacon Costello. “In a way that started my journey to the priesthood. I told him I was a seminarian. He was just amazed.”

While visiting his grandparents during his childhood, Deacon Costello was introduced to Bishop George Rassas, retired auxiliary bishop for the Archdiocese of Chicago. At the time, he was pastor of St. Mary Parish in Lake Forest, Ill.

“My grandparents would take me to daily Mass and we would go talk to Fr. Rassas,” said Deacon Costello. “That parish was kind of a second home for my family.”

Bishop Rassas will attend the ordination.

Deacon Costello, 31, the son of John and Eileen Costello, was born in Paris, Texas. His family moved around for his father’s career, including two stays in Neenah. St. Margaret Mary, Neenah, is his home parish. Following graduation from Neenah High School in 2009, Deacon Costello studied at the U.S. Naval Academy in Annapolis, Md. He graduated in 2013 and was commissioned as a surface warfare officer.

While studying at the Naval Academy, Fr. Michael Parisi, a priest from the Diocese of Paterson, N.J., who served as a chaplain, first asked Deacon Costello to consider the priesthood.

“He was really the one who encouraged me. He took a risk,” said Deacon Costello. “He told me that there was something he sees that are signs of a vocation to the priesthood and that I should consider it. I was kind of resistant. I knew that he cared for me. He had a good relationship with all the midshipmen. I knew he was someone I could trust. So, even though I didn’t want to hear it, I knew I had to take it seriously.”

Fr. Parisi will vest Deacon Costello at the ordination Mass. Bishop David Ricken will be the main celebrant. Archbishop Timothy Broglio of the Archdiocese for Military Services will concelebrate. Deacon Costello is a co-sponsored seminarian. Following three years of ministry in the Diocese of Green Bay, he will provide five years of ministry in the Navy.

“It will be good to go back,” he said. “I get to provide the sacraments in the same way I was provided when I was in the Navy. I feel a ministerial call to it and it’s also an opportunity to give back. I wouldn’t have been able to grow in the life of grace in the sacraments if it weren’t for the priests who had been my chaplains on the ship.”

Deacon Costello points to another priest who influenced his faith life. He made his first confession with Fr. Alphonse Anthony, a priest in the Diocese of Tyler, Texas. In 2018, Fr. Anthony died. Prior to his death, Deacon Costello called him.

“He showed me the mercy of God in confession,” said Deacon Costello. “When I called him, I asked him if there was anything he would encourage. He said, ‘I wish I had spent more time with Jesus and the Blessed Sacrament in prayer.’”

Deacon Costello’s older brother, Johnny, and his older sister, Maureen, and her husband, Greg, and their two daughters, Elise and Nora, will attend the ordination along with cousins, aunts and uncles.

“Those were great experiences getting to be in the parish environment,” he said. “That gave me a lot of excitement for parish ministry and to see God’s grace working on a daily basis in all those people’s lives.”

His first Mass as a priest will be at 9:30 a.m. Sunday, July 4, at the National Shrine of Our Lady of Good Help in Champion. Deacon Costello describes the Shrine as a place of “refuge, prayer and peace” for him. A present goal he plans to continue in his priesthood is to offer thanks for those who prayed for his vocation.

“I want to say ‘thank you’ to the Lord for the goodness of all these people, first and foremost, in prayer,” he said. “Anytime different people come to mind, I try to grow in a spirit of thanksgiving for them. Thank you for that person’s presence and love for me.”

Watch the priestly ordination of Deacon Patrick Costello here. Photos from the day can be found on Flickr.