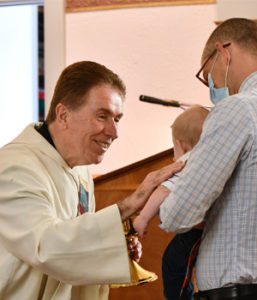 POY SIPPI — Deacon Bob Precourt has always been interested in Wisconsin towns, history and the landscape. So it didn’t take long for him to realize that Sacred Heart in Poy Sippi and St. Mark in Redgranite are special places.

“The first weekend, Sunday, after the second Mass at St. Mark’s, everyone had gone and I just stood in the darkened church, and I thought, ‘This is really a holy place, this is a holy parish,’” said Deacon Precourt. “And I felt the same thing at Sacred Heart, a distinctive holiness.”

As pastoral leader for both parishes for the past eight years, Deacon Precourt said he’s experienced a growth in diaconal holiness and faith through the inspiration he’s received from others — how they live and interact and act — beyond coming to Mass. “Love, honor, virtue, self-sacrifice — it’s all intangible, but in a faith community that’s vibrant like this one, it’s demonstrated all the time.”

Ministries where he’s seen that commitment include Generations of Faith (religious education), stewardship and youth service with the area food pantries, and the Holy Non-Raffle, an initiative that Deacon Precourt began because of COVID-19. Instead of the usual 50/50 raffle, parishioners were asked to consider contributing what they normally would have spent on raffle tickets. Parishioners were so responsive that the donations nearly equaled the amount raised pre-pandemic.

The stewardship ministry, which is dedicated to helping the food pantries and the Waushara County Backpack nutrition program in the elementary and middle schools, has expanded during his tenure with education and social justice components. Most of the parish children who are above the age of 10 participate in the Waushara County Food Pantry youth ministry, where Deacon Precourt has been working with the director, Marty Lee, for seven years developing the program.

Lee makes sure the kids understand that what they are doing is important and how their service impacts others. The children write a paragraph about their experience, which is published in the church bulletin. “It has a profound effect,” said Deacon Precourt. “Spiritual formation and corporal works of mercy, those things are constantly emphasized.”

Deacon Precourt’s goal is to always be available and responsive, whether he’s helping a family plan a funeral, preparing Scripture synopses, assisting a priest with sacraments or dealing with an emergency situation in the middle of the night, it’s always about serving the people. The smaller, rural communities allow for deeper relationships to develop and that makes celebrating sacraments particularly memorable, he explained.

“Baptisms are my favorite diaconal experience,” he said. “They are typically joyous occasions; each holds tremendous possibility and hope. It is all about the baby, about a new spirit being welcomed into God’s church.

“I try to make it as personal as I possibly can and I always bring in the wider congregation,” he continued. “I say, ‘We’re all being baptized again.’ Obviously, this is (the baby’s) baptism, but we’re all going through the same thing.”

The wider congregation is also part of the sacrament of anointing, which, according to Deacon Precourt, has had an amazing, expansive development in the Catholic Church. Formerly referred to as “last rites,” a priest was called only in cases of extreme physical sickness. However, Vatican II redirected anointing of the sick and opened it more to community participation, and encouraged people to receive it before their deathbed. At St. Mark and Sacred Heart, it has been offered monthly (pre-pandemic) for seven years.

“If you wait until the end, you often miss the person alive. So if we administer this — I call it the sacrament of healing — when someone is suffering, whether that be emotional, physical, mental or spiritual, it is spiritually healing and people feel fortified in all sorts of ways,” said Deacon Precourt. “And you can receive it more than once.”

While retiring as pastoral leader, Deacon Precourt has been appointed to St. Mary Magdalene Parish in Waupaca, effective July 1. In addition, he will also do  mission work, including fundraising and on-site building projects for the Christian Appalachian Project in Kentucky. Fr. Kyle Sladek has been appointed administrator of St. Mark and Sacred Heart parishes, effective July 1, concluding his appointment as parochial vicar of St. Pius X Parish, Appleton, effective June 30.