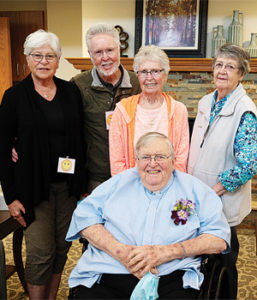 Fr. Richard Allen, seated, is pictured with family members prior to Mass at St. Paul Elder Care in Kaukauna on May 27, the anniversary of his ordination to the priesthood. From left: sister-in-law Jean and brother John Allen of Madison, sister Alice Burton of New London and sister Sarah Jane Allen of New London. (Sam Lucero | The Compass)

KAUKAUNA — Fr. Richard Allen marked his 60th anniversary of ordination on May 27 by celebrating a Mass of thanksgiving with a small group of family and friends at St. Paul Villa Assisted Living, where he resides.

In his six decades of priestly ministry, Fr. Allen said he has seen a lot of changes, both in society and in the church. Ordained a year before the Second Vatican Council opened on Oct. 11, 1962, Fr. Allen has long been a champion of Pope St. John XXIII’s call for “aggiornamento,” or renewing the church.

“I look back on 60 years as a priest and I am overwhelmed by the changes that have gone on in this world and in the church,” he said. “The church of the Second Vatican Council moved from the hierarchical model to a model of consultation. Pope Francis has grasped this truth more than many others.”

Born Jan. 2, 1935, in New London, Fr. Allen was one of five boys and seven girls born to Frank and Mary Allen. He attended Salvatorian Seminary in St. Nazianz and St. Paul Seminary in St. Paul, Minn., where he earned a bachelor’s degree in 1961. He was ordained to the priesthood by Bishop Stanislaus Bona at St. Francis Xavier Cathedral.

After ordination, Fr. Allen continued his education during the summers. He attended Marquette University in Milwaukee (1962-1966), where he earned a master’s degree in history, the University of Wisconsin-Madison (1968) and Northern Michigan University in Marquette, Mich. (1969).

His first assignment was as assistant pastor at St. Joseph Parish in Marinette. In the fall of 1961, he joined the faculty of Marinette Catholic Central High School and served as principal from 1968 to 1974.

“I had a lot to learn in those first 14 years as a high school teacher,” he said. “I saw teachers walk with their students beyond their expected goals. The students learned to believe in themselves and learned that life is never as simple as an algebraic equation. At times, it seemed like bedlam and then a sense of order sneaks through.”

His final assignment was in 1985 as pastor of St. Gabriel the Archangel Parish in Neenah, where he served until his retirement on June 30, 2011. Fr. Allen then spent time as priest celebrant at St. Mary Parish in Peshtigo from 2011 to 2014 and at St. Patrick Parish, Stephensville, and St. Denis Parish, Shiocton, from 2014 to 2019.

Fr. Allen said parish ministry taught him a lot about collaboration and the gifts that the laity possess. He said he believes the church still has a long way to go in taking advantage of these gifts, especially those of women.

“I firmly believe that, within the next few generations, we will find a more adequate way to have women serve in our parish community,” he said. “Look at what has happened in the 86 years of my lifetime. Seismic changes within generations.”

He recalled sitting at his desk at Catholic Central in Marinette “when a group of girls came in and asked if they could form a girls’ basketball team. … A few years later, they are racing at top speed down the basketball floor and setting up a ‘box and one’ defense to shut down the scorer.”

“A couple of years later, the girls were asking: ‘Why can’t we serve’” at Mass, he said.

“If we can bring about these changes, what happens when we unleash the work of women in the church?” added Fr. Allen. “Many will no doubt be kicking and shoving as they move along. Yes, we are talking about seismic change. But our church community is well intentioned to move in that direction.”

While change takes time, Fr. Allen said he is edified by the guidance of Pope Francis.

“I like the analogy that Pope Francis uses about the church as a ‘field hospital,’” he said. “We are not perfect. We do not march with military precision.

“I love my church so much that I can be part of our community as we step out into new fields of involvement,” added Fr. Allen. “We will make mistakes. We will stumble. But we can talk and pray with one another. And stumble along with the Holy Spirit as we continue to take this Gospel to the ends of the world.”

Witnessing the renewal in the church called for by St. John XXIII has been a slow, but necessary process, added Fr. Allen.

“As we go through changes that I have seen in my lifetime, I feel fortunate to have been part of the process,” he said. “It took me a long time to realize that changes are important, healthy and productive. Sixty years with very few dull moments. … I believe I am part of a church that continues to dream and change. I believe in a church that can speak God’s message of love.”