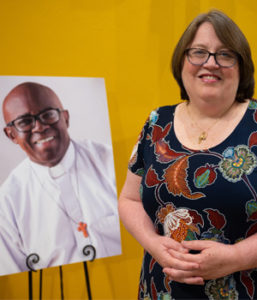 Heidi Saxton, co-author of “Forgiveness Makes You Free,” spoke about her experience working with the Fr. Ubald Rugirangoga, whose photograph is seen in the background, at a presentation June 26 at the National Shrine of Our Lady of Good Help in Champion. The Rwandan priest, a frequent visitor to the shrine, died last January of complications due to COVID-19. (Sam Lucero | The Compass)

CHAMPION — Several hundred people gathered at the National Shrine of Our Lady of Good Help on June 26 to remember a priest from Rwanda who preached forgiveness and healing. Not only did Fr. Ubald Rugirangoga herald a message of forgiveness, he practiced it.

Following a genocide in his country that left an estimated 800,000 people dead, including his mother and more than 80 other family members, Fr. Ubald chose to forgive. He then went on to help others scarred by the 1994 genocide do the same by establishing the Center for the Secret of Peace in Rwanda..

Fr. Ubald, a frequent visitor to Green Bay and the shrine, where he led healing services and celebrated Mass, died Jan. 7, 2021, of complications from COVID-19. He was visiting the United States when the global pandemic hit, forcing him to remain in the country with friends in Jackson, Wyo. He contracted the coronavirus at an unknown location and was admitted to the hospital in Jackson on Oct. 22, 2020. He was flown by MedEvac to the University of Utah Hospital in Salt Lake City on Oct. 30 and spent 10 weeks in the intensive care unit before succumbing to respiratory failure at age 64.

Five months after his death, Bishop David Ricken, who was introduced to Fr. Ubald while serving as bishop of the Diocese of Cheyenne, Wyo., celebrated a memorial Mass for Fr. Ubald at the shrine’s Mother of Mercy Hall. A eucharistic healing prayer service followed.

Presentations were also offered by two women who knew and worked with Fr. Ubald: Heidi Saxton, who assisted Fr. Ubald with his 2019 memoir, “Forgiveness Makes You Free,” and Katsey Long, who met Fr. Ubald in 2009 and became the coordinator of his U.S. visits. She began a nonprofit organization to preserve Fr. Ubald’s legacy and continue the ministry he started through the Center for the Secret of Peace.

In an interview with The Compass, Saxton, who is an acquisitions editor at Ave Maria Press, publisher of “Forgiveness Makes You Free,” said she met Fr. Ubald at a women’s conference in Minneapolis about four years ago.

“I watched him interacting with the women praying with him and I had this thought come into my head. He’s somebody that I should talk to and help him write his story,” said Saxton. “The more I found out about him and about the genocide, the more I really felt this is a story that needed to be shared on a broader level.”

Saxton and her husband, Craig, members of Queen of Peace Parish in Osceola, Ind., traveled to Rwanda in 2018. She interviewed Fr. Ubald’s surviving brother, Reverian Rugwizangoga, and sister, Pascasie Nyampundu, and spoke to people who, thanks to Fr. Ubald, found and offered forgiveness for atrocities.

“I met the man, Straton (Sinzabakwira), and talked to him about what he had done,” she said.

Straton was the mayor of the Karengera Commune, where Fr. Ubald’s family fled for safety during the genocide. Straton ordered the killing of his family, including his mother.

“There were tears coming to his eyes,” said Saxton. “This was a man who is entirely repentant, whose life had been transformed because Fr. Ubald not only forgave him, but — when Straton was in prison, his wife died and left behind two small children — Fr. Ubald took these two children under his wing.”

Fr. Ubald adopted the children and paid for their schooling. Today, the young man, Enod, is a construction worker and the young woman, Giselle, has graduated from medical school.

“These are examples of how Fr. Ubald showed such mercy that went beyond the simple saying, ‘I forgive you,’” said Saxton. “I think that that example is such a powerful way of answering that question, ‘How do you forgive the unforgivable,’ and it’s only possible through Jesus.”

Saxon said the last time she saw Fr. Ubald was at a women’s conference in Columbus, Ohio, in February 2020.

“I will always be grateful that I had that friendship for those last couple years of his life, because this book is going to continue that story and that legacy and show people not just how do you get physical healing, but how do you get truly whole? That, of course, only happens in heaven,” she said.

“St. Therese of Lisieux used to say, ‘I will spend my heaven doing good on earth,’ and I really believe that Fr. Ubald is right there in that section of heaven interceding for us and praying for us,” added Saxton. “I miss him very much, but I know he’s doing something even better now.”

Fr. Ubald’s legacy will be the hope of forgiveness and mercy he preached, said Saxton, but it also has lessons for the country and the church.

“Fr. Ubald, towards the end of his life, said, ‘As America goes, so goes the world,’’’ explained Saxton. “I think he understood, when he saw the violence that was going on and he saw the division that’s characterized (the country) the last four years, especially, I think that he knew that something needed to change. He recognized the evil that he’d seen in his homeland, and I think that his single greatest legacy, if we allow it to be his legacy, is that he will show us (how) to come together unified — not only as a nation, but also as a church, as the whole church.

“There’s room for many different kinds of people in the church and Fr. Ubald showed us that the way of love and the way of forgiveness and the way of mercy, those are the essential ingredients in being able to move forward. I think that’s his greatest gift to us,” said Saxton.