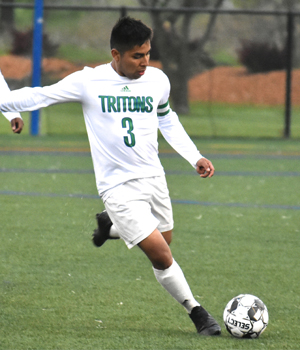 Senior captain Christian Martinez of Notre Dame Academy, Green Bay, approaches the ball during the WIAA Division 2 boys’ soccer state championship game versus McFarland on May 15 at Marian University in Fond du Lac. The Tritons finished the season, which began in the fall, with a 20-4-4 record. (Submitted Photo | For The Compass)

GREEN BAY — It was a season to remember for the Notre Dame boys’ soccer team for many reasons. The Tritons finished as the 2020-21 spring WIAA Division 2 state tournament runners-up and the journey to get there was like no other in the program’s history.

Notre Dame began with the traditional fall boys’ soccer season. The team was undefeated at 9-0 when they were shut down due to COVID-19 precautions.

“We had no idea if we would get to play again,” said senior captain Sam Limoni. “Some of the schools who we were playing in the fall kept playing and they were disqualified for the spring.”

Fortunately, Notre Dame was granted the opportunity to play in what the WIAA (Wisconsin Interscholastic Athletic Association) deemed the “alternate season.” The entire fall roster returned for the spring schedule.

“When we found out we were going to play again, I didn’t know if there was going to be state,” said Limoni, a midfielder. “I thought we were just going to play and get in as many games as we can.”

“We were excited to find out that we were going to get another shot at it, and we looked at it as a gift and we wanted to make sure we took full advantage of the opportunity,” said head coach Michael Prudisch. “The guys were grateful for another chance and they made sure that they weren’t going to let this opportunity go to waste. I think with the uncertainty of the end of the fall season, it helped the guys appreciate every game in the spring because all it would take is one positive COVID test to ruin the season.”

The fall success provided confidence that the team could compete for a state title, once the WIAA established it would crown spring champions in two divisions. Their opponents may not have thought so, said senior captain Christian Martinez.

“We were an underrated team,” he said. “Everyone thought that we weren’t going to be very good this year. In fall, when we went undefeated, we knew this was a good team. We really didn’t have a star player. We had good teamwork.”

When Notre Dame’s season resumed, the Tritons posted some impressive wins and two eye-opening ties. They matched both Appleton North and De Pere in 1-1 score games. Those two teams faced off in the spring WIAA Division 1 state championship game won by North 1-0.

The road to state was not easy for Notre Dame. In the second round of regionals, the Tritons defeated Sturgeon Bay, 2019 state champions, 2-1. They then faced Winnebago Lutheran in the sectional final.

The state soccer tournament is usually a multi-day event, but both the semifinals and championship games for the alternate season were played in one day. Third seed Notre Dame played second seed Shorewood, another defending state championship team, in the first round at state on May 15 at Marian University in Fond du Lac. Sophomore Emmet Lawson scored in overtime to lift the Tritons to a 1-0 victory and a spot in the championship game. Notre Dame fell 6-1 to McFarland in the title contest.

“I played over 200 minutes that day,” said Limoni. “I didn’t leave the field. I was sore for five days.”

“It’s tough to try and come up with something to say after losing a state championship because it seems like no words are going to raise their spirits at the time,” said Prudisch. “I just had to remind them of everything that we accomplished this year and they did it all in the midst of a pandemic. Between the fall and the spring, we finished 20-4-4.”

The team did not have one positive COVID-19 test all year, he added. Prudisch credits Notre Dame athletic director Matt Koenig for all he did to help the soccer team play.

“It’s been a challenging year for everyone, but especially for the kids, and getting the chance to have a little normalcy through playing was huge for their mental and physical health,” said Prudisch. “Not only did they get to play, but they got the chance to make memories with their friends/teammates on and off the field that would have otherwise been lost.”

Reflecting on the season, the players now laugh at some of the challenges they faced. Junior defender Alek Martinez, cousin to Christian, said that the team played the most games in the state. Christian added that the Tritons once played five games in one week. Practice space was also a challenge with the girls’ soccer season and spring football at the same time. Fans were limited during the fall schedule and for a portion of the spring.

Christian and Limoni find humor in that they had two senior nights. Due to the uncertainty, the senior soccer class was honored at the final fall game and then again at the final regular season game in the spring.

Boys’ soccer will return as only a fall sport next school year.

“We will have off-season training and captains’ practices in the summer,” said Alek. “It’s going to be different without (the seniors). We’re going to miss them for sure. I’m hoping we can get back to where we were with these guys.”

Notre Dame’s returning players will include its top three scorers in Lawton, Garrett Watzka and John Sack, and its two other captains, Adam Brada and Connor Handrick.

“I will remember the friendship and bonding with all the guys off the pitch, not only on it,” said Limoni about his high school soccer experience. “It’s definitely a group of guys I really enjoy hanging out with and making jokes with. I think our friendship reflected our style of play and teamwork. We played for each other.”