On the papal flag, yellow and white mean gold and silver 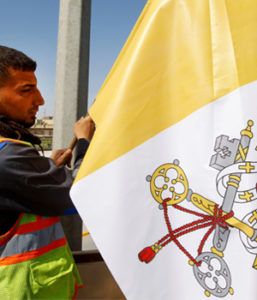 During early July, part of our national focus turns to our flag, the “red, white and blue.” The Stars and Stripes are sometimes seen in our churches buildings, or on our bulletins, for the weekend near the Fourth of July or other national holidays.

There is another flag you may see at church as well: a white and yellow one. This is the pope’s flag, more correctly, the Vatican City flag. Vatican City is the smallest country in the world, but it is a country and has a national flag.

The flag is not as old as our Old Glory and only dates to June 7, 1929. This is the day that the Lateran Treaty was signed by Benito Mussolini, then prime minister of Italy, and Pope Pius XI’s secretary of state, Cardinal Pietro Gasparri.

The flag is one of only two square flags used in the world — the other is Switzerland’s white cross on a red background. Most flags are rectangular because they fly better in the wind. Sometimes the flag will be produced as a rectangle, but that is not its official shape. Its dimensions are based on the 1862 Papal Infantry flag’s square proportions.

The Vatican City flag, also called “the papal flag,” contains the pope’s coat of arms: the crossed keys with the papal tiara over them. The keys symbolize the power given to St. Peter, the first pope, by Jesus: “I will give you the keys to the kingdom of heaven. Whatever you bind on earth shall be bound in heaven; and whatever you loose on earth shall be loosed in heaven” (Mt. 16:19).

While each new pope is not actually handed a set of keys upon taking office, the crossed keys can be seen in many places: the papal coat of arms, the papal crest and the Vatican City crest and coat of arms. The statue of St. Peter in the Vatican Square even holds two keys in one hand. The keys are always shown crossed over each other. One key is gold, the other silver.

According to the Vatican News Service, the papal keys symbol dates to the 14th century as “the official insignia of the Holy See.” The gold key symbolizes the power of heaven and silver is for the pope’s power on earth. “The mechanisms (the parts that go in locks) face upward to heaven and the grips turned down,” the website (vaticannews.va) explains, “to be held by the pope on earth, as the Vicar of Christ.”

On the Vatican City Flag, the keys and tiara lie on the white field, which is what is called “the flag side.” The yellow half is on the hoist side. However, when you see the yellow and white, what you are really seeing is gold and silver. In flags, as in traditional heraldry, yellow and gold are the same, as are white and silver.

There is another story about the two colors.

In 1801, Pope Pius VII formed “the Noble Guard” as the pope’s personal guard. They wore red and yellow cockades (knots of ribbons) in their hats — matching the colors of an older flag used by popes. However, Napoleon, who had seized control of Italy in 1799, also used those colors for his own troops. Some of the Noble Guard even joined the French army. So, in 1808, Pope Pius VII ordered his guards to change their red ribbons to white to show loyalty to him. (The Noble Guard was disbanded by Pope Paul VI in 1970.)

There have been various papal flags since the 12th century. Many contained the symbol of the keys. When the geographic area of the Vatican was incorporated into the Kingdom of Italy in 1870, it lost its right to a flag. (Rome became the capital of the Italian Kingdom in 1871.) While there were papal flags from 1871 to 1929, they were not recognized as a national emblem.

Today, the papal flag flies over the Vatican and at the residence of papal nuncios or delegates (the ambassadors to various countries) worldwide as diplomatic missions of the Vatican.

Since the Vatican City flag is less than 100 years old, one might wonder why it is displayed at churches along with the U.S. flag. While there are various reasons, the main one for this tradition started with World War II. Our country, including Wisconsin, was home to many German immigrants and their descendants.

Because of the Nazis, some of these German families were looked upon with suspicion, so they felt it necessary to display the U.S. flag, both at home and at their churches, to show their loyalty to the United States. With the U.S. flag so visible, it was decided that the papal flag should also be visible.

While secular holidays are good moments to bring the flag to our church gatherings, the flag should never be a focus at Mass.

The Sacristy Manual, used by parishes, states that any national flag, including even the Vatican City flag, is never considered as appropriate as part of the usual sanctuary decorations. The manual further cites the U.S. bishops’ document, “Environment and Art in Catholic Worship,” which says national or cultural symbols “are not appropriate as permanent parts of the liturgical environment” (101).

(See more on the topic of national symbols in this week’s FAQs column on this page.)

Still, using a flag — the Vatican’s or a national flag — for entry areas can be very effective and emotionally stirring. The same is true for other emotionally stirring symbols, such as a picture of the pope or a memorial honoring deceased war heroes, who gave their lives for others.

Then there is the anthem. Something else that uplifts. No, not the U.S. anthem, but the Vatican City national anthem: “Inno e Marcia Pontificale” (Hymn and Pontifical March). It was composed by Charles-François Gounod and officially adopted by the Vatican on Christmas Eve, 1949. It, like many anthems, is meant to stir the heart.