While it may seem they remind us of evil, they have a practical purpose 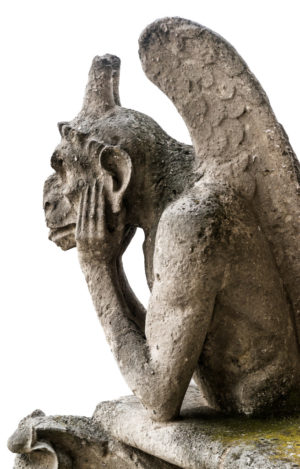 They loom over the streets and spring from roofs, mouths agape and eyes staring.

Monsters of fairy tales? No, statues on cathedrals. We know them as gargoyles.

This April 15, two years to the day after the fire that engulfed Notre Dame Cathedral, the “Friends of Notre-Dame de Paris” opened an interactive website — restorenotredame.org — where people can donate to help the restoration project. One donation feature is to restore the gargoyles of the cathedral.

Thanks to Victor Hugo and the Disney franchise, the gargoyles of Notre Dame are well known. However, the most famous ones — like Stryga, the one with his tongue sticking out and often called “the spitting gargoyle” — arrived late on the scene in the world of gargoyles. Stryga and 55 others arrived in the 19th century, when the Paris cathedral underwent a massive restoration. (There were other gargoyles much older, dating to the cathedral’s founding in 1345.)

Gargoyles date back to ancient Greece and Egypt. Even Pompeii, destroyed in a volcanic eruption in 79 A.D., had gargoyles.

The word “gargoyle” comes to us from a French word “gargouille” meaning “throat.” That name explains their original purpose — as downspouts.

The gargoyles that became famous on Gothic churches around Europe were adaptations of architectural features that directed rainwater away from the church foundation.

The first of these were pretty basic — channels of terra-cotta or stone that soon became decorated. The original gargoyles of Notre Dame were very uniform in shape, shaped much like dragons, with their wings close to their bodies and water running from their gaping jaws. However, that same water wore them down and the gargoyles had to be replaced by 1844.

Architects Jean-Baptiste-Antoine Lassus and Eugène Viollet-le-Duc handled the restoration, which brings us back to Stryga — yes, some of the gargoyles on Notre Dame are named. Despite common tales, Stryga, who came to be as part of the 1844 restoration, is not a gargoyle. Nor does he channel water, even if people say he spits. Stryga is part of the 56 stone creatures along the Galerie des Chimères, a balcony that connects Notre Dame’s two bell towers. A “chimera” is a hybrid creature, made from aspects of two or more animals (or humans) and was a common form of statuary used all around the ancient world. Egypt made chimera famous, with their animal-headed deities. Chimera are a form of grotesque.

However, “chimera” is not quite the right word either, for these gargoyles and similar statues. All of them fall under the title of “grotesque.” This means they are not based completely on real animals or human figures, but are a twisted and deformed blend of two or more. Thus they are purposely ugly.

Most architectural and church resources note that, since most people in Europe’s Gothic Age (the 12th to the 16th centuries) were illiterate, churches did their best to teach using images. These included paintings, stained glass and statues, which included grotesques along with statues of angels and saints. The idea was to juxtapose good and evil in stone images.

Not that everyone thought this was a good idea.

St. Bernard of Clairvaux, a doctor of the church and Benedictine abbot in the 12th century, complained that these grotesques should not be in the abbeys where monks prayed. He called them “unclean monkeys, strange savage lions and monsters” that people should have been embarrassed to have spent money on.

However, gargoyles and grotesques remained popular, with many stories and legends arising.

Dragon and a saint

These legends of gargoyles and saints trace back to St. Romanus, who lived in the 7th century as bishop of Rouen in France. At the time, the story goes, a fire-breathing dragon was loose in the area near the Seine River and was devouring people. No one, except a condemned man, would join Romanus on the hunt for the creature. Romanus subdued it with the sign of the cross and took it back to town, where it was burned. However, since its head and throat had been fire-proofed by its own breath, they did not burn. So the head and throat were attached to the local church — and so the legend of gargoyle began.

While gargoyles fell from popularity after the 16th century, they enjoyed a revival in the late 19th century and into the 1930s. And not just in Europe. There are many examples of gargoyles and grotesques in the United States, including the steel gargoyles of the Chrysler Building in New York City and another on the Mackie Building in Milwaukee (built in 1879 to house the Grain Exchange).

Even the Washington National Cathedral (Episcopalian), begun in 1907, includes gargoyles. And some are very recent, such as the 1986 grotesque of Darth Vader chosen during a contest for schoolchildren.

Returning to Notre Dame, the donations for Stryga, as of mid-May, were almost complete, as were donations to repair statues of most of the cathedral’s saints. However, several “gargoyles” remained to be “adopted,” such as the screaming Phenex and eagle-shaped Dantalion, as well as the reliquary of St. Genevieve, patron saint of Paris.

While most of us cannot go out and subdue dragons, like St. Romanus, we can be part of that history by exploring the stories of church architecture — whether in Paris or our own churches of northeast Wisconsin.

There may not be any gargoyles, but there are plenty of stone decorations to explore, such as the Sacred Heart statue in St. Francis Xavier Cathedral, which once stood in Door County, or the exact marble replicas of the Pieta (only 100 were authorized by the Vatican) at the National Shrine of Our Lady of Good Help in Champion and at St. Mary of the Lake Parish in Lakewood. Each tells its own story of faith