Neenah native continues to help out with Masses in Austin Diocese 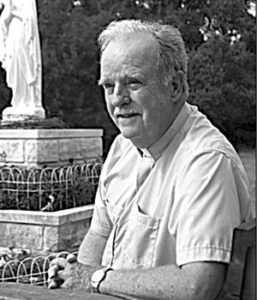 ALLOUEZ — Fr. Ray Dowling, who recently marked 60 years as a priest, made a request during a recent phone interview with The Compass.

“Please give my regards to all the people I know and anyone who remembers me (in the Diocese of Green Bay),” he said.

“Hopefully, if they hear my name, they won’t roll their eyes,” he added with a laugh.

Fr. Dowling, a Neenah native, recalls the support he received on May 27, 1961, when he was ordained to the priesthood by Bishop Stanislaus Bona at St. Francis Xavier Cathedral in Green Bay. The extended number of supporters in attendance was a surprise.

“There were seven of us in 1961. We were awarded so many tickets for family and friends,” he explained. “One of my sisters ran off a bunch of copies of the tickets. My home parish was St. Patrick, Menasha. I wondered how so many people from Neenah and Menasha were able to get in?”

Following ordination, Fr. Dowling served a summer assignment as an assistant pastor at St. Mary Parish, Leopolis. He recalls having five funerals in the first month. He also has fond memories of a situation where he had the best intentions of helping the young people of the parish.

“There was this little creek with flowage downstream from Leopolis to Shawano. It was only two or three feet deep,” he said. “I wanted to make a swimming hole, so I got some old barn boards and built a dam.”

One day, following morning Mass, Fr. Dowling was eating breakfast when he received a visit from a man who identified himself as being from the Wisconsin Department of Natural Resources.

“He said to me, ‘It looks like an old farm swimming hole down there.’ I told him that I built a dam,” said Fr. Dowling. “He said, ‘Father, I don’t want to tell you this, but that dam is illegal. It’s interfering with the flowing of water. I will be back in six weeks. It would be a good time, during those six weeks, to dismantle the dam.’”

Fr. Dowling served as assistant pastor at Annunciation Parish, Green Bay, and Holy Rosary Parish, Kewaunee, before moving into education. In 1964, he joined the faculty at Silver Lake College (Holy Family College) in Manitowoc. He taught theology and served as a chaplain at the college for seven years. Fr. Dowling said that he was saddened when he found out that the college had closed in 2020.

His first pastorate was at St. Mary Parish, Brillion, in 1971. During return visits to the diocese, Fr. Dowling often met with friends from Brillion.

In 1979, Fr. Dowling was granted a leave of absence from ministry in the diocese to enroll in the paramedical studies program at Sacred Heart Nursing School in Milwaukee, with his intention being to serve in a Third World nation. The opportunity never  developed, so he decided to pursue ministry in Mexico where he provided pastoral care in parishes in the outskirts of Mexico City for seven years.

“When I came back to the states (in 1986), the Bureau of Prisons had heard of me,” said Fr. Dowling. “I became chaplain at the federal penitentiary in Atlanta. It’s still there. I jokingly refer to it as ‘Al Capone’s alma mater.’”

Many of the inmates were from impoverished backgrounds in Cuba, enemies of Fidel Castro who were deported, said Fr. Dowling.

“They very easily ran up against the U.S. criminal system,” he said.

In November of 1987, a riot broke out at the facility and Fr. Dowling was held hostage for 11 days. He carried on dialogue with the inmates and credits the “grace of Jesus Christ” for working through him.

Atlanta was a transfer point for many inmates. Fr. Dowling remembers a man who asked for a favor. He spoke Italian and wanted someone to contact a cardinal in Rome to inform him that he was being held prisoner.

“When the complement of inmates became mostly American citizens (no longer Spanish-speaking immigrants), I looked for a different opportunity,” he said. “A position opened up at a prison outside of Dallas. It was quite a bit smaller than the penitentiary in Georgia.”

Fr. Dowling cherishes a special Easter Sunday moment from thatTexas prison. Two Masses were celebrated, one in English and one in Spanish. One year, instead of reciting the “Gloria,” he played the “Hallelujah Chorus” from Handel’s Messiah.

“It was the first time some of them had heard classical music,” he said. “That’s one of my favorite memories as a prison chaplain.”

Fr. Dowling retired from active ministry in 2000.  He resides in Cedar Park, Texas, and has helped out with Masses in the Diocese of Austin when needed.

He said his path has crossed over the years with people with ties to the Diocese of Green Bay. He fondly recalled that one day, when he was the celebrant at a Catholic school Mass, he met one of the teachers and learned she was a former Franciscan Sister of Christian Charity from Manitowoc. They became close friends.

Helping out with weekend Masses at various parishes continues to be a joy for Fr. Dowling. He didn’t have any sort of celebration for his 60-year anniversary, but welcomed the opportunity to reflect on his priesthood with The Compass.

“They were good years,” he said. “For parish ministry, Leopolis and Brillion were my favorites. I still don’t miss the Wisconsin winters.”