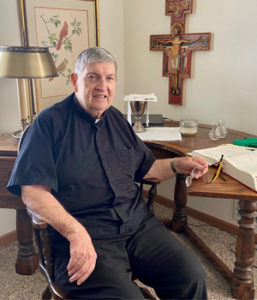 Fr. John Gallagher, a 50-year jubilarian who retired in 2007, is pictured in the spare room of his home in Manitowoc, where he celebrates daily Mass. (Suzanne Weiss | For The Compass)

MANITOWOC — The Irish are known for telling entertaining tales. Fr. John M. Gallagher, who is of Irish descent, is no exception.

Fr. Gallagher, who celebrates 50 years as a priest this year, shared several amusing stories as he looked back at his life.

Like the time in seminary, when he handed in a paper to his Latin teacher: “I said, ‘How did I do?’ He said, ‘Mr. Gallagher, why don’t you take up gardening for a career?’”

Then there was the time Fr. Gallagher and another new seminarian were asked to be altar servers during a Mass at which the rector would be in attendance. It was the first time being servers at seminary for both young men.

“He stood and I was kneeling, so then I stood, and he kneeled,” Fr. Gallagher said.

The rector’s response: “By the time you get your Laurel and Hardy act together, I might ordain one of you.”

There also was the time he went to what was then Holy Family Hospital in Manitowoc to bring Communion to some of the patients. The sister taking him around was delayed, so he went on to the next room. There, a woman in a wheelchair greeted him enthusiastically.

“I gave her Communion. She was just so happy to see me,” Fr. Gallagher said.

“You didn’t give her Communion, did you?” the sister asked when she rejoined him. “I said, ‘Yes, why?’”

The first time he gave a homily as a deacon, his mother and father snuck into church so their presence wouldn’t make him nervous. His father’s response to his 25-minute homily: “If you ever talk so long in church again, don’t admit you’re a Gallagher or that you’re Irish.”

Fr. Gallagher was born in Milwaukee 84 years ago to Dominic and Anna (Nemetz) Gallagher, who were Manitowoc natives and eventually returned to the area. He didn’t attend seminary until he was 23.

“I didn’t know what I wanted to do. I changed my career nine times from high school on. I didn’t want to work in a factory or office. I knew I wanted to work with people,” he said. “I enjoyed parties and everything else. Then, one time, during a party, I thought, ‘There has to be more than this.’”

Little did he know that all of the mischief and setbacks in childhood and adolescence would provide him with material for his homilies. “I had no idea I was accumulating fodder for the future,” he said with a laugh.

Fr. Gallagher, a graduate of Notre Dame High School in Milwaukee, studied at St. Francis Seminary near Milwaukee. He was originally a seminarian for the Archdiocese of Milwaukee. He was incardinated into the Diocese of Green Bay on May 13,1971, and ordained a priest on July 11, 1971, at St. Andrew Church in Manitowoc. He was assigned to various parishes in Manitowoc, Appleton, De Pere, Goodman, St. Anna, Antigo, Gillett and Suring. Fr. Gallagher retired in 2007 and fills in as a priest celebrant whenever needed.

He has seen a lot of change during his priesthood, including the Second Vatican Council in the early 1960s, which allowed Mass to be celebrated in the local languages, rather than Latin. “I felt more comfortable talking and praying in my own language,” Fr. Gallagher said.

When asked what are the greatest lessons he’s learned, Fr. Gallagher answered: “That there is a God. That I’m not him. I learned forgiveness; it took a while. I learned what real faith was. I learned that religion is a decision, not a performance. If we’re performing, we’re just entertainers. You’ve got to live the faith. It takes a lifetime to learn it. With God’s grace and mercy, we will pass the course when it’s our time.

“I really experienced growth in witnessing people who were dying,” he added. “It was an exercise in faith. They were so positive about the future of eternity.”

Fr. Gallagher also recalled a memorable sabbatical in Italy. “Wherever you went in Rome or Italy, you were always stubbing your toe on history,” he said. “This is where the early church took root.”

Cherished souvenirs include a group photo with him standing next to St. John Paul II and a hand-painted San Damiano cross, which hangs in his home.

Fr. Gallagher summed up his 50 years as a priest by saying, “Even with all the bumps and bruises, it was wonderful.”