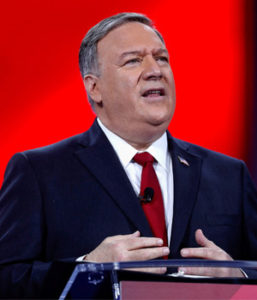 WASHINGTON (CNS) — In office or out of office, past and present leaders in the U.S. government stressed the need to push for religious freedom across the world during the July 13-15 International Religious Freedom Summit held in Washington.

Mike Pompeo, former secretary of state and CIA director, focused on China in his 10-minute speech.

“Forced abortion and sterilization should strike at the heart of every American who cares — or claims to care — about what happens in the world,” Pompeo said, repeating a charge leveled against China’s treatment of Uighur Muslim women.

“A society that lacks regard for religious liberty will soon see all political liberties stamped out,” Pompeo said. “They will soon see genocide. We must prevent genocide from happening.”

He added, “When people lose their ability to practice their faith, authoritarian regimes will dominate.”

Pompeo noted that during the Chinese Communist Party’s recent 100th anniversary celebration, Xi Jinping, the Chinese president, said that any nation that interferes with China’s aims “will find itself on a collision course with a great wall of steel.”

House Speaker Nancy Pelosi, D-Calif., delivered prerecorded remarks, as did Samantha Power, the current administrator of the U.S. Agency for International Development and onetime U.S. ambassador to the United Nations, as well as Pompeo’s successor as secretary of state, Antony Blinken.

“Human rights are indivisible” including “a person’s right to speak, to assemble or to participate in the political in their country,” Blinken said in his message. If religious freedom is not protected, he added, “all other rights are jeopardized too.”

The State Department has worked at “facilitating the release of wrongly detained individuals,” Blinken said, and “we’ll keep going.”

The United States, he added, “was founded in part on the belief that everyone … should be able to believe what they choose.”

“In 56 countries around the world, people are silenced, persecuted or subject to worse for their religious beliefs,” Power said, adding, “More people are subject to restrictions than they were a decade ago.”

Calling herself “the proud daughter of Dublin, Ireland, where the Troubles loomed nearby” between Catholic republicans favoring independence and Protestant unionists loyal to England in Northern Ireland, Power said she was likewise “proud to serve a president whose faith guides his life in public service,” a reference to President Joe Biden, a Catholic.

“I am proud to lead an agency that is unequivocally committed to protecting religious minorities and advocate for their rights.”

Denying religious freedom is “associated with higher levels of conflict and violence,” Power said. Such nations also are “twice as likely to witness social conflict as those with few or no restrictions,” she noted.

“Lasting peace, Power added, “will require freedom of worship and access to holy sites and places of worship for people of all faiths.”

During a July 15 panel discussion, Sens. Chris Coons, D-Del., and James Lankford, R-Okla., talked about faith in their workplace — including their own, the Senate.

Coons spent eight years at W.L. Gore & Associates, the maker of Gore-Tex, where, among other things, he was responsible for its ethics training program. “As a company, we really hadn’t been thinking about faith in the workplace,” he admitted.

But any employer’s aim should be a place where “people are free to bring their best selves to the workplace, when they think their best aspects are welcomed and cherished.”

Even when working on potentially polarizing issues as gun violence and tax policy,” doing the work is less burdensome across the aisle, Coons said, by “knowing each other, respecting each other, knowing about each other.”

“Faith is something that dominates every relationship that I have,” Lankford said. “It’s not a jacket. It’s not something I can remove and set aside.” He added, “As an American, I shouldn’t be intimated when someone who has a different faith sits next to me.”

Multinational firms, Lankford said, “have unique responsibilities.” Even if offered financial incentives to come here and do business in a particular country, he added, “they should ask themselves, ‘Just because you can come here, should you come? Will my employees have the right to practice any faith for their choosing?'”

Melissa Rogers, executive director of the White House Office of Faith-based and Neighborhood Partnerships, garnered applause at the summit when she said Biden would appoint a new at-large ambassador for international religious freedom “in the coming weeks.” The seat has been vacant since Brownback exited the post with other appointees from the Donald Trump administration.