Green Bay native served in education as a teacher and principal 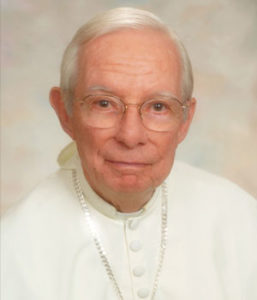 Abbot DeWane was born on Feb. 26, 1932, in Green Bay, to the late Thomas and Angeline (Bos) DeWane. His home parish was St. Willebrord, Green Bay.

Following graduation as salutatorian from what was then Central Catholic High School in Green Bay, his desire to become a priest solidified. Abbot DeWane felt he was “born to be a priest.”

In 1955, he graduated from St. Norbert College, De Pere, with a bachelor’s degree in philosophy while teaching at Abbot Pennings High School, De Pere. On May 31, 1958, Abbot DeWane was ordained to the priesthood. Following ordination, he served as a teacher, then registrar at Premontre High School in Green Bay for five years.

He attended Marquette University in Milwaukee and earned a doctorate in education in 1964. From there, he went on to the University of Chicago for doctoral administration studies, while also serving as the house superior at the Holy Spirit House of Studies for six years.

Upon returning to De Pere in 1970, he was appointed dean of students at St. Norbert College.

In 1973, Abbot DeWane returned to Premontre and served as principal for nine years. During this time, he was on the St. Norbert College board of trustees, held leadership positions on several educational committees and was active in various professional organizations.

In 1993, he returned to St. Norbert College to serve as the director of teacher education, a position he held for nine years.

In 1993, Abbot DeWane was also appointed the director of formation for St. Norbert Abbey. In April of 1994, he was elected fifth Abbot of St. Norbert Abbey, and received his abbatial blessing from Bishop Robert Banks on June 6, 1994.

Following his nine-year term as abbot, he moved to the Priory of St. Moses the Black in Raymond, Miss., and ministered in a variety of parishes and at a state correctional facility. He retired to St. Norbert Abbey in 2019.

Abbot DeWane is survived by the Norbertine Community of St. Norbert Abbey; one sister, Marilyn Marsh; and many nieces and nephews.

He was preceded in death by his parents; siblings: Gordon (Elaine) DeWane, Lois (John) Cawley, and Gladys Jentz; and brother-in-law, Charles Marsh.