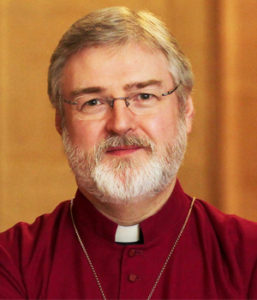 Anglican Bishop Jonathan Goodall of Ebbsfleet, pictured in this 2013 photo in Reading, England, released a statement Sept. 3, 2021, that he is stepping down from his office and will become a Catholic. (CNS photo/courtesy The See of Ebbsfleet)

MANCHESTER, England (CNS) — The Anglican bishop of Ebbsfleet stepped down from office after announcing that he will become a Roman Catholic.

The resignation of Bishop Jonathan Goodall was announced by Anglican Archbishop Justin Welby of Canterbury in a Sept. 3 statement released by Lambeth Palace. Bishop Goodall is a former ecumenical secretary to a previous archbishop of Canterbury and was ordained in 2013 to serve as a “flying bishop” of a diocese erected to cover traditionalist parishes that would not accept women priests.

“I am deeply grateful to Bishop Jonathan for his ministry and many years of faithful service,” Archbishop Welby said.

“My prayers are with him and Sarah, both for his future ministry and for the direction in which they are being called in their continuing journey of dedicated service to Christ,” he said.

He continued: “With regard to the see of Ebbsfleet, we will be starting a process of consultation with colleagues and others — including the parishes to whom Bishop Jonathan ministers — to determine what the next steps will be.”

No details of who will receive Bishop Goodall into the Catholic faith or where his reception will happen have been revealed. His Anglican ministry will end Sept. 8, according to the statement from Lambeth Palace.

Bishop Goodall, who is based in Reading, England, declined to be interviewed but said in a Sept. 3 statement that he would step down after eight years in office “in order to be received into full communion with the Roman Catholic Church.”

He said that the decision was reached “only after a long period of prayer, which has been among the most testing periods of my life.”

“Life in the communion of the Church of England has shaped and nourished my discipleship as a Catholic Christian for many decades,” he said in a statement posted on the website of the Diocese of Ebbsfleet.

“This is where I first received — and for half my life have ministered, as priest and bishop — the sacramental grace of Christian life and faith,” he added.

“I shall always treasure this and be thankful for it. I trust you all to believe that I have made my decision as a way of saying yes to God’s present call and invitation, and not of saying no to what I have known and experienced in the Church of England, to which I owe such a deep debt.”

The bishop’s decision to join the Catholic Church represents the highest-level transfer since Gavin Ashenden, a former royal chaplain to Queen Elizabeth II, became a Catholic at Christmas in 2019.