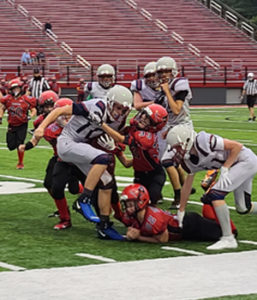 A Fox Valley Saints ball carrier fights for extra yardage during an eighth grade game versus Hortonville during the program’s inaugural season in 2020. (Submitted Photo | For The Compass)

APPLETON — The 51st high school football game between Xavier and Fox Valley Lutheran (FVL) was played on Sept. 10. The showdown, won by the Hawks of Xavier 21-7, also marked the 35th meeting between the two schools in the “Apple Bowl” series, which features the Paustian-Lloyd trophy for the victors.

Thanks to a new middle school football program that began in 2020, Appleton’s oldest prep football rivalry should continue for many years to come. Fox Valley Saints Football serves as a feeder program for Xavier and FVL. The program was formed when Fox Valley Pop Warner Football announced, following the 2019 season, that it would no longer offer sixth and seventh grade leagues, only third through fifth.

“They stopped doing it because there were not enough local players in sixth and seventh grade football,” said Dr. Peter Katz, who led the effort to create the Fox Valley Saints. “It wasn’t because there were fewer players (overall), but because of realignment for the public schools. Kids were being drawn away from Pop Warner and (were) now playing for their schools.”

Katz, a member of St. Pius X Parish, Appleton, coached the eighth grade team featuring a combined roster of Xavier and FVL players, so there was a blueprint for forming sixth and seventh grade teams. He credits John Ravizza, Ph.D., superintendent of the St. Francis Xavier Catholic School System, and Robert Bires, principal at Xavier Middle School, for their support.

“We got together and figured out how we could make it happen,” said Katz. “They weren’t able to support us financially because of the budget. I decided that the best way to form it was as a club team which we fund through registration, through sponsors and through fundraisers. We are a co-op, sixth through eighth grade. It’s a combination of kids who are living in the Fox Valley area who will be attending Xavier or FVL.”

Xavier assisted the Saints by placing the program under its umbrella insurance. Both Xavier and FVL also provide their fields for middle school football home games on Saturdays.

“We get the music going for them, announce their names. On the weekend games, we get all the concessions going,” said Katz, whose sons, Will and Dane, play for Xavier High School.

“If we didn’t have sixth or seventh grade football, kids would get hooked up in other sports. With no opportunity for football, they may play their other sports year-round,” he added. “Then, eventually, you don’t have an eighth grade team. Then you are going to play 8-man football in high school or not have a team at all.”

Forming the program last year during the pandemic was challenging, added Katz. All three Saints teams were able to play six-game schedules. This year, the teams will play eight-game regular season schedules as part of the Great Lakes Independent Football Conference, which offers playoffs for seventh and eighth grades. Non-conference games were added to provide for more playing time. The Fox Valley Saints program has about 100 players this season, up from 79 last year.

The coaches decide on faith elements with the teams. Fox Valley Saints is a development program, so helping players grow as people is just as important as improving on the field.

Goal number five of the program is winning, said Katz, and is only meaningful if the first four program goals are achieved. The four main goals are:

“We have kids from Green Bay to Oshkosh, New London, Neenah, Freedom, all over the place,” said Katz. “There are a lot of little schools out there. I spend time calling parents, people at the different schools to get the word out.”

The combined Xavier/FVL program has its advantages, said Rust.

“When I coached Pop Warner, we had multiple schools and I liked it because it makes them get to know kids from throughout the community,” he said. “I think when they get to JV (junior varsity) at Xavier and FVL and when they get to play each other, they will have that camaraderie. It will be fun.”

“I got to know some (FVL) kids last year, so it’s good to play with them again this year,” said Nick Rust, Kevin’s son who is the starting center on the seventh grade team.

“We are all out here Monday through Thursday (at practice) working very hard,” said Zander Marg, a running back on the seventh grade team who attends Xavier Middle School. “It’s a lot of responsibility.”

“It’s been a huge success,” said Katz. “We have good coaches, people who’ve worked together and have been very supportive.

“My goal is to eventually have enough to form one team that’s FVL and one that’s Xavier under one umbrella, the Fox Valley Saints. We can practice together and scrimmage, and then play games (as separate teams). I love that they get to mix together.”