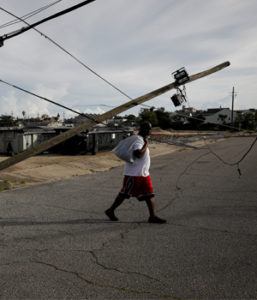 WASHINGTON (CNS) — Three residents of a housing ministry belonging to the Archdiocese of New Orleans were found dead following the wrath of Hurricane Ida, which left a slew of Louisiana residents trapped in their homes and without electricity days after its Aug. 29 landfall.

In the days after the hurricane, authorities rescued hundreds of residents of Christopher Homes, part of the archdiocese’s senior living ministry that helps the elderly and those with physical disabilities rent affordable homes in the New Orleans area. But during the rescues, city officials expressed concerns about why residents of the buildings had not been evacuated.

“Residents are independent living tenants with leases, and before storm season, all residents were required to provide a personal evacuation plan to property management,” said a Sept. 6 statement on the Christopher Homes website. “Without a mandatory evacuation order, Christopher Homes could not close the buildings for Hurricane Ida.”

The website said Christopher Homes “manages 21 apartment complexes with nearly 2,500 apartment units.” The ministry said 268 residents were evacuated from six of the properties with help from civil authorities, but it didn’t say when.

The agency said it had requested help immediately after the hurricane passed, though none came until after the first discovered death of one of its residents on Sept. 3, the website said.

The staff was “saddened by the deaths of three residents in properties in Orleans Parish,” the statement said, giving thanks “for the care and compassion of the staff who stayed behind to help the residents who chose to stay.”

While all residents were encouraged to evacuate, Christopher Homes said, some residents chose to stay or “did not have the means” to evacuate without the help that usually accompanies a mandatory evacuation.

“Christopher Homes staff prepared and followed the city’s directives to shelter in place with the resources available,” the organization said. It also noted that the buildings had generators.

The residents who were evacuated have been taken to state-provided shelters until power is restored to the facilities and the homes are inspected for safety.

While the death toll of Ida is still being calculated, Louisiana has said the deaths of least a dozen people in senior housing or nursing homes have been attributed to Ida; some have lacked the electricity to operate some of the equipment they need to survive, such as oxygen tanks. Hundreds of thousands are still without electricity.