The sorrows of Mary have their own memorial feast

We all know the pain of sorrow and loss. And many of us, out of compassion, have sought to share the pain of others in such situations. For both struggles, we can turn to the Blessed Mother for guidance. 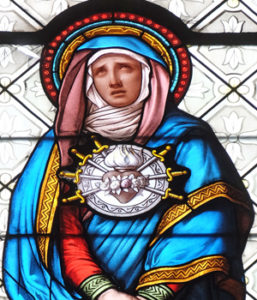 On Sept. 15, the church marks the Memorial of Our Lady of Sorrows. The memorial falls on the day after the Feast of the Exaltation of the Holy Cross. This is no coincidence. The sorrows of Mary are tied to the suffering and death of her son upon the cross at Calvary.

As the bishops of the Second Vatican Council noted in their Dogmatic Constitution on the Church, “(Mary) stood in keeping with the divine plan, suffering grievously with her only-begotten Son. There she united herself, with a maternal heart, to his sacrifice, and lovingly consented to the immolation of this victim which she herself had brought forth” (n. 58).

While the memorial of Mary’s sorrows is today united with the feast of her son’s cross, the history of the Sorrows of Mary has been celebrated at different times and even as two separate commemorations in the church’s history. Mary’s sorrows have been honored under various titles as well: “Our Lady of Dolors,” “the Sorrowful Mother” or “Mother of Sorrows” (Latin: Mater Dolorosa), “Our Lady of Compassion” and “Our Lady of Piety.”

The sorrows of Mary became a devotion in the church around the late 11th century and focused at first on only five sorrows of Mary, all related to events starting on Holy Thursday (from Jesus’ imprisonment) to his death and burial. Over time, the sorrows of Mary expanded in number and scope — sometimes including things like there not being room at the inn when Jesus was born.

A bit later, the number of Mary’s commemorated sorrows settled at seven and covered the life of Jesus from his mother’s perspective, starting with his infancy and Simeon’s prophecy. There have been many such lists of Mary’s seven sorrows over the centuries. Two different lists, for example, are noted by the Marian Library at the University of Dayton:

Today, the most accepted list of Mary’s seven sorrows are:

These seven sorrows are also remembered in the mysteries of the Servite (Servants of Mary) Rosary, also known as the chaplet of the seven sorrows, with its seven decades of beads. (The Servites were founded in 1233.)

These sorrows of Mary are what we recall now on the Memorial of the Sorrowful Mother on Sept. 15. In art, Mary’s sorrows are often depicted as seven swords embedded in her Immaculate Heart. (However, the Sorrowful Mother is also shown in art with just one sword in her heart, representing the sword predicted by Simeon.)

The present Sept. 15 date for this memorial was set in 1913 by Pope Pius X. A second feast that was also associated with the sorrows of Mary previously took place on the Friday before Palm Sunday. Called “the Friday of Sorrow,” it was part of Passion Week. After the changes to the church calendar in 1969, Passion Week (also called Passiontide) was removed from the church calendar and the Friday of Sorrow went with it.

The Passionist Nuns note that the memorial on Sept. 15 falls on the octave (the eighth day) of the feast of Mary’s birth on Sept. 8. They also note that Sept. 15 “is dedicated to the spiritual martyrdom of Mary, Mother of God, and her compassion with the sufferings of her divine son, Jesus.”

During the next week, as we contemplate Jesus on the cross and his mother at the foot of that cross, we might benefit from remembering the words of St. Paul VI about Mary in 1974: “The commemoration of Our Lady of Sorrows, (is) a fitting occasion for reliving a decisive moment in the history of salvation and for venerating, together with the son ‘lifted up on the cross’, his suffering mother” (Marialis Cultis, n. 7).