Mysterious presence of heavenly messengers in the mysteries of the rosary 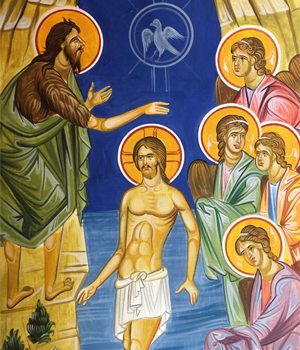 An icon of the Baptism of the Lord in the Church of St. Paraskeva of the Balkans reveals the presence of angels in what we reflect upon in the First Luminous Mystery of the rosary. The church is near St. Naum Monastery, Ohrid, Macedonia. (Bigstockphotos.com)

As we recite this prayer, we may notice that angels share in the salvation history recorded there and have a special place in many of the rosary’s mysteries. As the Catechism of the Catholic Church (CCC) notes: “Angels have been present since creation and throughout the history of salvation, announcing this salvation from afar or near and serving the accomplishment of the divine plan: they closed the earthly paradise; … Finally, the angel Gabriel announced the birth of the Precursor and that of Jesus himself” (n. 332).

When we reflect on the rosary and on angels, we can see their presence at the beginning of each of the three sets of mysteries in the traditional format of the rosary.

Other mysteries of the rosary are just as clear about the presence of angels. For example, the Coronation of Mary, the fifth glorious mystery, would certainly include angels, since one of Mary’s titles is “Queen of Angels.”

Likewise, the third joyful mystery is filled with angels (Lk 2:9-14), announcing “good news of great joy” to shepherds, as well as praising God with the words of the Greater Doxology we say at most Sunday Masses: “Gloria in excelsis.”

Sometimes the angelic presence is less obvious in the rosary’s mysteries. An example is the second joyful mystery. In the Visitation, Mary greets Elizabeth. No angels are mentioned. However, the reason Mary hurried to her relative’s side was because she learned of Elizabeth’s pregnancy from the archangel Gabriel, who promised that “nothing will be impossible for God” (Lk 1:26-38). Even before speaking to Mary in the first Joyful mystery, Gabriel had already appeared to Elizabeth’s husband, Zechariah, to announce the impending conception of John the Baptist “who will be great in the sight of the Lord” (Lk 1:11-19).

With reflection, the presence of angels in the work of salvation history can be seen in many of the rosary’s mysteries, including the Ascension, the Assumption and, no doubt, at the foot of the Cross.

Even the newer mysteries of the rosary — the Mysteries of Light, set into place by St. John Paul II in 2002 — reveal angels. The very first luminous mystery is the Baptism of the Lord. While the Gospels do not mention angels at this event, the Trinity is present. We know angels attend God at all times. This is why — while Western art may not depict them — icons from the Eastern-rite churches, both Catholic and Orthodox, show angels at Jesus’ Baptism. They appear, waiting reverently on the opposite side of the river from John, bearing robes to clothe the newly-revealed Christ. Their presence makes sense, since, as the Catechism says, “Christ is the center of the angelic world. They are his angels…” (no. 331).

Since they have supporting roles in the mysteries we reflect upon in the rosary, it would be natural to ask for the accompaniment of angels during this prayer. As Pope Leo XIII wrote in his encyclical, Augustissimae Virginis Mariae, in September 1897, in support of the Confraternity of the Holy Rosary, the pope encouraged meditation on angelic ministry in the mysteries of the rosary: “What more divine, what more delightful, than to meditate and pray with the angels? With what confidence may we not hope that those who on earth have united with the angels in this ministry will one day enjoy their blessed company in heaven?”

Many people pray the rosary at the end of the day, perhaps even before falling asleep at night. While some people may feel that falling asleep in the middle of prayer is not acceptable, they can turn to the words of St. Thérèse of Lisieux: “I should be distressed that I drop off to sleep during my prayers and during my thanksgiving after holy Communion. But I don’t feel at all distressed. I know that children are just as dear to their parents whether they are asleep or awake…”

The angels, especially our guardian angels, must feel that same affection for us. There is even a pious tradition that says that, if you fall asleep while praying the rosary, your guardian angel will complete it for you. However, it might be a nice thing to ask your angel for help. As St. Ambrose, who taught St. Augustine, said, “The servants of Christ are protected by invisible, rather than visible, beings. But if these guard you, they do so because they have been summoned by your prayer” (CCC, n. 329).

Sources: Catechism of the Catholic Church; The Story of a Soul: The Autobiography of St. Thérèse of Lisieux; iconreader.wordpress.com; thecatholicthing.com; thepoweroftherosary.com; and vatican.va.