After losing son to cancer, Gloriann Ciha walks journey with others 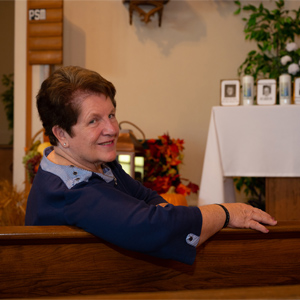 NEW FRANKEN — Gloriann Ciha wears a black rubber bracelet on her right wrist. It is inscribed with the words, “I can do all things through Christ, who strengthens me.”

The quote has been Ciha’s inspiration since her youngest son, Jerry, was diagnosed with cancer and died on July 3, 2020, at the age of 43. “I say it every morning when I get up,” she said.

Jerry not only left behind his mother and father, Gloriann and Raymond Ciha, he left behind his wife, Katie, and three young children, now ages 15, 12 and 8, and two brothers, Brian and Jay. After being diagnosed with mouth cancer, Jerry underwent chemotherapy and radiation. “Everything tested out and he was in remission,” said Ciha. “About two weeks later he was having pain in the side of his neck.”

The cancer had returned and spread to his neck and glands, she said. “From there, it kind of went downhill.”

During this time, Bill Meo, business manager at the tri-parishes of St. Thomas the Apostle in Humboldt/Sugarbush, St. Joseph in Champion and St. Kilian, gave Ciha the black bracelet.

She said her faith guided her through the ordeal.

“I said a lot of rosaries,” said Ciha. “Every day we had prayers and rosaries, I went to the chapel (National Shrine of Our Lady of Good Help in Champion) a lot and lit candles. … It was hard, but I felt like I knew the Lord was behind us.”

While Katie took care of Jerry’s medical needs, Ciha said she and her husband helped out when possible.

“Whenever we could be there, we were helping out — until COVID hit,” she said. “But we got to spend the last week, every day and night, with him before he passed away.”

The words on her bracelet helped Ciha manage her grief — as did the support of her parish.

“People were wonderful,” she said. “They were praying and very supportive.”

Ciha and her husband have been members of St. Kilian since 1999. They recently celebrated their 49th anniversary. “We originally attended St. Amand Parish in Walhain, but it ended up closing,” she said.

Soon after joining St. Kilian, Ciha took on volunteer roles at the parish.

She was invited to serve on the parish finance council by fellow parishioner Bob Barta, and today, serves as council secretary. She is an extraordinary minister of holy Communion and oversees the liturgical ministry schedule. Ciha is also in charge of the parish’s Scrip gift card program and is a member of the Holy Dusters, a group that cleans the church each Thursday morning.

“I feel if you give to the Lord, you will receive,” she said about her volunteer work at the parish.

One of her volunteer duties during the pandemic was helping take parishioners’ temperatures and offering them hand sanitizer. One Saturday evening, a fellow parishioner, Carol Basten, asked if she could help. “She goes, ‘Can I sanitize hands?’ and I said, ‘Of course.’ Every Saturday she would be back here to sanitize,” said Ciha.

Basten — whose husband, Harlan, also served on the finance council — was also experiencing health challenges, according to Ciha. “She had something with her lungs,” she said. “Then she started getting worse and had a hard time breathing. In December (2020), she found out she had cancer.”

After having lost her youngest son to cancer just five months earlier, Ciha was devastated to hear the news.

“It really hit me,” she said. “Something told me that I had to help her. So I talked to several parishioners here at church. I just asked, ‘Can we each take a week and start making a meal?’”

Ciha also contacted St. John Lutheran Church in Luxemburg, which offers free meals to community members in need. “So I signed Harlan and Carol up for that and every month I would pick it up and bring them the meal,” she said.

Ciha paid weekly visits to Carol and would often drive to Green Bay to pick up groceries or other items. She also spent time curling Carol’s hair and bringing her Communion.

“Every Thursday, I would bring Communion to both of them,” she said. “Then I started bringing Communion on weekends. She never wanted Harlan to leave her, so I would stop after Mass on Saturday and bring them. I just wanted to make sure that they would receive the Lord. To me, that’s a very important thing to give Communion to the sick.”

As Carol’s cancer worsened, said Ciha, “it was more of a memory of my son. I could see what was going on and I just kept positive.”

On her last visit, Ciha said she took Carol’s hand and said, “Carol, the Lord is guiding you through this. Just listen to the Lord.” She died on Sept. 7.

“Carol, she just left an impression. She was such a kind, kind person and she appreciated every bit of (support) and so does Harlan,” said Ciha. “I call him once a week. He’s having such a hard time. …”

Every year in November, the parish erects a display in front of the church that pays homage to parishioners who have died in the past year. A framed photo of Basten is among this year’s display.

Ciha, who was quick to point out that other parishioners joined her in reaching out to Basten, said she finds joy in bringing comfort to others.

“I guess they say, what you do for others, you do it for the Lord,” she said.

Your Catholic Neighbor:
Name: Gloriann Ciha
Age: 75
Parish: St. Kilian, New Franken
Favorite saint: Teresa of Kolkata
Words to live by: “I can do all things through Christ, who strengthens me.”